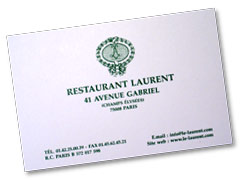 Quintessential. Archetypal. Epitome. These are all words that come to mind when trying to describe the dining experience at Laurent, a classic French Chateau situated in the gardens of the Champs-Elysees. Laurent represents the essence of what overrated San Francisco restaurants like Fleur-de-Lys are trying (too hard) to achieve.

My first impression when I walked into the restaurant was that I was very, very, under-dressed. This is the type of place that is so romantic you would feel the most comfortable dining in an 18th century vintage evening gown or top hat and tails. Never fear, however, if you happen to show up without a jacket, as I did — the staff won’t bat an eye and your dinner will be no less spectacular — but if you happen to remember, dressing up isn’t a bad idea, especially because the dining room is set up so that most tables allow you to face out into the dining room and observe the fashions, as well as the looks of gastronomic ecstasy on the faces of your fellow diners during your three hour meal.

Let’s get the wine list out of the way right off the bat, shall we? Nearly an inch and a half thick, it read like an encyclopedia. We’re talking chapters dedicated to regions and varietals, and pages dedicated to individual years within those regions, each page listing scores of wines. I had my choice between nearly forty Medoc wines from 1999, ranging in price from 50 Euros to nearly 700. A quick skim through (which took nearly 10 minutes) revealed several bottles over $4000. I have never seen a wine list of this caliber before. I opted to simply give a price range and region to the wine steward and let her take care of me.

This is the type of place that I could advise you to place yourself in the hands of everyone ” the waiter, the staff, and most of all the chef Philippe Braun and his capable advisor Joel Robuchon. Follow your stomach, ignore your pocketbook, and believe that you’ll have no regrets. My only regret is that I let Ruth drag me out of there ” I wanted to simply stay and eat and eat and eat.

Our evening began with smoked salmon hors d’oeurves, small filets of fish draped over crispy slices of baguette, each drizzled in a precise crosshatch pattern of parsley and mustard sauce. Seeing a seared foie gras on the menu, Ruth didn’t need to think too much about her appetizer, and it did not disappoint, lovingly nestled against a grilled pistachio crusted mango atop a thin glaze of balsamic reduction. The foie was sprinkled on top with large crystals of fresh sea salt and roughly crushed black pepper, which made the delicate flavor of the meat explode in the mouth. I couldn’t believe that in all the times we had ever ordered a similar dish, no chef had ever made this simple addition. Normally, I would have a hard time keeping my hands off a dish like that, however, I was swimming with my langoustines or “little lobsters” — also known as Dublin Bay prawns. They were lightly dipped, or perhaps wrapped, in some sort of dough or batter and fried before being drizzled in a pesto sauce and hidden in a forest of frisee. The dishes were artfully arranged beautiful without being theatrical — understated, and focused on flavor without losing the opportunity to engage the visual senses as well.

And that was just the appetizer. Time slowed down as we progressed through entrees of delicately salted and grilled baby rack of lamb over purple artichokes and carrots, and a filet mignon béarnaise sauce and some potatoes that the chef must have sold his soul to prepare. The waiter said he had tried many times to figure out how to make these small golden fried potatoes, which are not actually potatoes, but potato balloons, one millimeter thick, seamless, and totally hollow inside, collapsing under the slightest touch of the fork and dissolving in the mouth.

The cheese course was stellar, and to pass the time while our desserts were prepared, we got to snack on pastries which would certainly be illegal in certain states if they let them in the country, and which single-handedly must keep the French butter market afloat.

Dessert was everything you would expect given what preceded it. Ruth got fresh lychees on a sugar wafer sprinkled with lime zest paired with lychee sorbet over a anise seed cookie. I opted for a dessert inconspicuously titled, Chocolate 5 Ways, which turned out to be dark chocolate sorbet, dark chocolate mousse cake, a mini chocolate tart, a chocolate pistachio gateau, and bittersweet chocolate fondant.

The service matches the quality of the food, expertly delivered from start to finish, quiet and unobtrusive (at least as much as they could be in white coats and bowties) amidst the lightly mauve and marble décor. Most of the staff speaks English very well, so if, like me, your seventh grade French doesn’t come too easily you’ll be well taken care of.

Laurent offers a set five course daily tasting menu for $240 per person or you may order a la carte, which will run you $200 to $350 per person depending on what you order. At the time of writing the exchange rate was 1 Euro = $1.25. During the summer months, they open up the back of the restaurant and allow dining on their patio out back, which apparently is quite an experience on a sunny day. They are also open for lunch. Reservations at any time strongly recommended.