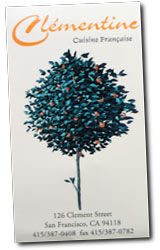 The first time I ate at Clementine was almost 6 years ago. It was pouring rain from a Pacific squall that overtook the city quickly on that afternoon, and due to the weather, and our desire to eat an early dinner, my girlfriend at the time and I were the only ones in the restaurant. On that afternoon, Clementine was a soft haven ” a cozy yellow room, hidden from the street by the climbing vines of its façade ” and it was also a wonderful meal. The food was delicious, the service attentive and warm, and the chef wonderfully funny as he wandered out of the kitchen to check on his only diners in the middle of the storm.

Times have changed a little since then – the weather in San Francisco isn’t any better during the winter, and now there’s virtually no chance of eating alone at Clementine. It’s now the bustling French bistro it was designed to be with appreciative diners eating at the bar, and people waiting for tables overflowing onto the street. The atmosphere matches the aspirations of the restaurant, enthusiastic and enjoyable, even raucous at times. If they still allowed smoking in restaurants in San Francisco, this one would be filled with smoking French, or at the very least, their imitators.

A recent trip to the Inner Richmond brought Ruth and I to the neighborhood, and seizing the opportunity, we nabbed the last two seats at the bar and the last two clean red wine glasses for an evening that reminded us of our recent trip to Paris. Like the busiest of bistros on the avenues of the 4th Arrondissment, the service is as attentive as it can be without compromising the need to get everything done at a brisk clip, leaving you with the impression that they’re always a little behind. Signal the waiter that you’re ready to order and they’re liable to smile and tell you that they haven’t forgotten you as they rush off to the kitchen for the crème brulee that still needs to be delivered to the table down the way. In a moment they’ll be back, a little breathless (especially if it’s a Friday night) to help.

The food is a seasonally varying menu, which seems carefully arrayed to offer a broad selection of choices without being too lengthy. Diners may order a la carte or choose the 3 course tasting menu for $24.95 which does not offer as much choice, but is a pretty good deal. Ruth, as always when it is offered, started with seared foies gras with raisin sauce over white potatoes, while I had the escargots with a classic butter, garlic, and parsley sauce. The snails were wonderful, however they were a little grainy, which is something that I have occasionally experienced with escargot that is a mystery to me, but less than desirable. For entrées we opted for the delectable parsley and mustard crusted rack of lamb which was perfectly cooked, and very juicy, and the roasted quail with watercress and porcini ravioli. The food is prepared well, but either my memory is faulty or it seems a little less creative than I remember, the flavors less distinct and vibrant. Perhaps my standards have just increased over time. Regardless, the food is above average, and perhaps not quite as good as the ever popular Chez Papa, but it is also not as expensive and even on a busy night you can have a conversation with your dining partner, which is hard to say about Chez Papa.

The desserts are competent but not stellar. My crème brulee was perfectly prepared, and the tart tatin was competent, but in my mind the dessert choices didn’t reflect the same thoughtful choice of entrees on the menu ” they seemed more like tired standards ” and they couldn’t compare to some of our recent dessert experiences in Paris.

The wine list is scarce by the glass, however by the bottle there are a reasonable range of options of international and domestic wines at a variety of middle and low price points. However, this might be a good place to bring your own if you’re interested in having a great wine with dinner, as the upper range of their wines was thinner than it could be.

Overall this is not a dining destination that will draw customers from all corners of the city, but if you’re in the inner Richmond and looking for solid bistro food at reasonable prices, it’s a good bet.

How Much?: Dinner for two (a la carte) including appetizers and a couple of glasses of wine ran us $80.


Reservations recommended Thurs through Sunday. Parking can be difficult due to the number of restaurants and shops on Clement.