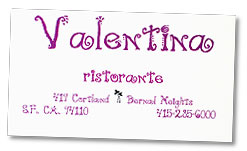 It’s always hard to bring myself to write about a small, favorite neighborhood restaurant, even though I have no delusions that this site is anywhere near well read enough to generate an onslaught of diners. However there’s always a small hesitation associated with giving away something that feels like a well guarded secret, no matter who I’m giving it to.
But for those who actually read this, I am committed to telling you about great places to eat, regardless of how close they are to my heart, and in this case, my home.

Valentina is a relatively recent addition to Cortland Street, the main drag through the quiet family neighborhood of Bernal Heights in San Francisco. It moved into the space formerly occupied by the Hungarian Sausage Factory, which despite having good food, never really seemed to get many patrons. Thankfully Valentina has no problem filling its seats, as most locals and more than a few discriminating San Francisco diners have seen it for the gem that it is.

It’s hard to mistake Valentina for anything else than what it is ” a family run place that is already well beloved in the neighborhood. Valentina (yes, there is a Valentina) and her mother wait tables, seat customers, and take their turn in the kitchen when things get stacked up. They’re also more than likely to come around and make sure you’re eating your plate clean and if not, to find out why.

The walls of the restaurant are covered with modern art by small time artists, and the rest of the décor is eclectic to match. The atmosphere of the restaurant is quiet and homey, but bustling as the evening moves on and the kitchen is humming. Unfortunately as the heat builds in the kitchen it also builds in the restaurant ” at times it can be uncomfortably warm, especially if you’re sitting at the window bar or the one table that’s closer to the kitchen. Until they get some better ventilation, I suggest dressing in layers that you can comfortably shed.

Offering several daily specials and a consistent menu of favorites, Valentina provides diners with classically prepared, wholesome central and southern Italian cooking with few frills and fantastic flavors. Don’t miss their homemade gnocchi with your choice of 3 sauces (I waffle back and forth between the pesto and the tomato basil) or their competent and tasty thin crust pizzas. I’ve also had many of their daily specials, both fish and meat, and they are always made with extremely fresh ingredients, simple and refreshing spices, and lots of care. The desserts are simple and good. I’m a big fan of their tiramisu, which although sometimes a little drier than it could be is nearly perfect in flavor. I’m also a big panna cotta fan, and theirs is tip tops, with kiwi and berry coulis artfully drizzled.

The wine list is compact but serviceable, offering several wines by the glass including an excellent Primitivo, as well as a decent selection of California and Italian reds and whites. Corkage is a reasonable $10 so feel free to bring that Brunello you’ve been saving.

Valentina is not the best Italian restaurant in the city, but its one of the most authentic, not really because of its food, but because it is a family affair from start to finish ” by the time you’re done with your meal, you’ll feel like you’re part of the family, and you’ll always be welcome.

How much?: Appetizers, entrees, and dessert for two with a couple of glasses of wine will run you about $65.

Parking on Cortland can be tough, but stray a few blocks away on the neighborhood streets and you should find some. Be careful about blocking driveways (one of them could be mine !!)