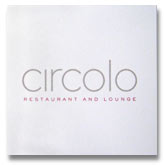 I tend to forget how difficult it is for a good restaurant to create a harmony of food, service, and atmosphere that fuse into a semblance of an identity or experience that is particularly its own. My recent experience at Circolo proved, however, that even with great chefs, and experienced staff, and a time tested location, it is possible to achieve only goodness instead of greatness. Opened at the end of March in the space occupied for years by Gordon’s House of Fine Eats, and staffed with a kitchen crew and a front house crew from Limon and Aqua, Circolo has a lot of potential on paper.

The first thing that diners familiar with the old Gordon’s will notice is that the layout of the restaurant has not really changed significantly. The lounge area in the front has been enlarged slightly to accommodate several low cubic tables paired with similarly shaped leather stools in groups of four where diners without reservations or those interested in more casual dining can sample from the menu and the nearby bar. (I still don’t understand, though, with a name like Circolo, why there are so many right angles on display as you walk into the restaurant).

This lounge area is separated from the rest of the space by a noticeable new addition: a floor to ceiling curtain of steel mesh which anchors to the familiar industrial, exposed piping overhead, all of which has now been painted flat black. The effect of this mesh, the new paint, and the mystifying elimination of all frosted windows that used to line the side of the restaurant has resulted in a closed dark feeling in the restaurant that is more appropriate for a dance club (if it weren’t obvious enough by the DJ station has been installed where the jazz trio used to sit.) This club atmosphere is very deliberate, as the co-owner Jon Mayeda is the owner of the dance club Decibel and Mercury. Apparently the restaurant has plans to use part of the warehouse space in back for large parties that will mix dining and dancing.

Lest anyone think that I’m simply waxing nostalgic for an old favorite haunt (or even worse, anti-hip) I was actually excited to try out Circolo’s innovative menu of Asian-Latin fusion, and had hopes that it might even prove better than Gordon’s solid, but not particularly inspired, comfort food. My friend and I were seated promptly by the smartly black-clad staff, and the similarly clad waitress patiently waited for us to haggle over what to order from their menu of small and large plates that featured such delectable items as the chef’s special Kobe beef carpaccio and scallops and artesian foie gras. Eventually we settled on sharing the fried calamari with a sake mignonette, pot stickers with shrimp, Colombian corn fritters, a mixed Asian green salad with lemongrass and green papaya, and a steamed whole tai snapper in green curry sauce with coconut fried rice.

Before our dishes started arriving, we were treated to small espresso cup of spicy tomato soup with bits sopapilla dough that was slightly one dimensional, but which piqued the taste buds for what was to come. Everything was delivered fresh and nicely composed on the plate, with some special touches on certain dishes. I particularly liked the tempura fried Shiso leaves that were arranged on top of the fish, and the fried lotus root which lay at the heart of the salad. Many of the flavors were disjointed however, and a couple of the dishes were just ordinary ” the calamari failed to impress and the corn fritters were just plain bad.

The fish was the best part of the meal. It was steamed to perfection and was clearly very fresh, and the green curry sauce was delicious. The coconut fried rice that we ordered to go with it was probably the single best flavor of the evening ” an aromatic, nutty, and pleasing accompaniment.

The wine list at the restaurant is brief and nothing special, with the exception of its clear intent to offer a few interesting options to be paired with the spicier or more Asian flavors on the menu like a couple nice German Rieslings. They charged me $15 to open and pour the Pinot Noir that I brought, which was a reasonable match for several of the flavors we experienced.

After we worked through the wine and our various plates, we ordered the only thing on the dessert menu that intrigued us: lime tart with a strawberry milkshake. This dessert was a perfect metaphor for my ultimate judgment about what Circolo has to offer. The flavors individually were OK, but they didn’t particularly complement each other nor did they display the finesse in preparation that might have turned them into something more than a novelty. This restaurant is simply trying too hard to be hip and different, and despite the talent it is clearly bringing to bear on the attempt, only delivers a decent meal and a disjunctive experience, instead of an inspired dining event. Even our waitress seemed to be trying too hard, to the point of hovering near our table looking like she wanted to constantly make sure everything was ok.

It may be that the restaurant is still working out the kinks and settling into its own groove, but I fear that it may just be a concept that’s better as an idea than an execution. Even though Circolo got it wrong, it is good to be reminded just how fortunate we are in San Francisco to have so many restaurants that do get it right.

How much?: With the corkage fee, dinner for two came to $100 for two including tax and tip.

Street parking is plentiful and while reservations are recommended, the restaurant seemed to have plenty of space on a Wednesday at 6:30 PM. Check the website for DJ and special party information. Put on your leather pants and go have a good time.