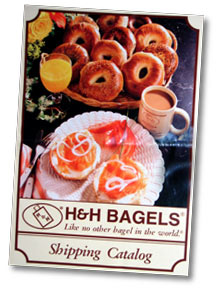 OK. OK. So it ain’t a restaurant. Heck they won’t even toast a bagel for you, not even if you beg and plead. What they are — simply — is the best bagel in New York City, and by extension, the world.

It’s sort of like even though we don’t invite other people to compete in the NBA finals, we call the winning team the World Champions. The best bagels in New York, by default, end up being world class. I’m sure the folks at H&H would gladly compete on the world stage, but really they don’t have to. They don’t have to toast your bagels either, but they will sell you some cream cheese, a bottle of juice or water, and a plastic knife for you to make your own breakfast, lunch, or dinner as you wander the city.

What makes a perfect bagel? Well, we won’t even address those horrible breadlike excuses for bagels that are not boiled before they are baked. But among those who can claim true bagel-ness, perfect means a slightly tough outer skin, a chewy, medium-dense inside pockmarked with bubbles, and a lightness to the overall object that is not too dry, but not overly moist and leaden. Bake it fresh hourly, and add to that excellent seasonings of your choice, and you have reached the epitome of bagel.

H&H is all that. You can take my word for it, as someone who has eaten a lot of bagels in his day, or you can take it on good authority from my Jewish relatives, who swear up and down about the infidels who think there are better bagels to be had in the city. Or you can simply listen to the thousands of New Yorkers who have, year after year, heaped praise on this simple bakery which hasn’t bothered to change anything about the way they’ve been making bagels (or decorating their store) since, well….. the beginning.

H&H was founded in 1972 by Helmer Toro and his brother Hector Hernandez, and has operated in its original location on Broadway at 80th street for the 32 years since it opened its doors. Recent expansion of its shipping business has led to the addition of a plant on 46th to handle the excess demand.

They’re a New York Institution, certainly, but lucky for the rest of us, they’ll ship their bagels overnight to anywhere in the US, and many places in the world. So next time you’re in the city, or next time you have a desire to nosh a little Brooklyn style wherever you are, look them up. You can even order on the Web.

How Much?: A couple of bagels, a block of cream cheese and a plastic knife will cost you about $5

There are also stores in Midtown on 2nd Ave and at the aforementioned 46th street location. Store hours: fresh bagels early to late every day.