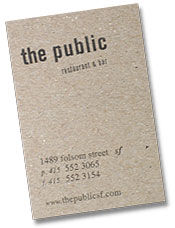 The last time I walked into the building at the corner of 11th and Folsom in San Francisco’s SOMA district, it was a neighborhood Mexican joint, serving good but unremarkable food along with good Mexican beers to succor us

worn out dot.com workers on the evenings we got out of work with the energy for a drink.

Lucky for all of us those days are over, and even luckier are we for having that old brick building taken over by The Public, a new venture from Greg Luna (formerly of Delfina) and Chili Montes (formerly of the Cypress Club). These two veterans have maintained the casual simplicity of the space with its iron i-beams, small bar, mezzanine dining area, and polished red cement floor, while creating a menu of fresh flavors that is billed as California/Mediterranean (only if Mediterranean is interpreted in the loosest possible way). The cuisine wanders from French to Italian to Greek to Spanish and back again, sometimes combining several regions, but always seeming self assured rather than schizophrenic.

Diners aren’t given a large number of choices (at any given time there may be four to six entrees and an equal number of appetizers and salads to choose from) but the dishes are delightful in their flavor combinations and carefully if not whimsically presented. I started with a goat cheese and beet terrine that was gorgeously crosshatched with brilliant purple beets and beet sauce against the bright white of the goat cheese, and of excellent quality. For her appetizer, Ruth opted for a pretty traditional acquacotta, a Tuscan vegetable soup/stew that came in a small terra cotta tureen and which was spiced perfectly and hid a poached egg inside. Another attractive starter was a Basque style beef dish with lentils, radicchio and basil.

The entrees on offer the evening we were there included their signature duck sugo (a type of pureed stew) with house made papardelle noodles, a pot roast with steamed carrots and marbled potatoes, a crispy polenta with a corn and mushroom ragout topped with mascarpone and basil, and an Alaskan halibut fillet with asparagus two ways: in a light asparagus basil sauce and mixed with julienne cucumber. I really enjoyed the duck, which was simply presented and delivered a rich earthy flavor surrounding the hand-made wide noodles, something you’d want to eat if you needed a little self-indulgent meal. Ruth’s halibut, on the other hand, was a study in delicacy, and very spring like in flavor — light breezy and just the right amount of food.

The choice of desserts, like the rest of the menu, was brief, but inventive, however I recommend forgoing all choices in favor of the chocolate bread pudding if it’s available, as it was simply outstanding. simply garnished with a light skein of caramel sauce on the plate, the pudding was perfectly moist and perfectly sweet without being over the top. One of the best desserts that Ruth and I have had out in San Francisco in a while.

The staff at The Public seem to be carefully chosen to complement the food: hip, laid back without being casual, and beautiful to the last. Luna and Montes seem to have scripted a mélange of flavors on the menu to be served by an attentive group of people whose ethnic backgrounds defy immediate identification and who lend a cosmopolitan air to the otherwise Bohemian atmosphere.

Finally, the wine list is, you guessed it, short, but not without its gems. Whomever made the selections has dedicated themselves on branching out from the traditional, and offers a number of mostly European and obscure US selections by the bottle and the glass. Whites include the Spy Valley Sauvignon Blanc for $32 to the Ceretto Arneis Blange from Piemonte for $36. Reds will take you from Melton’s “Nine Popes” Barossa Valley blend from Australia at $36 to the gorgeous A-Mano Primitivo from Puglia, Italy at $60. The menu also includes the option of a three wine flight of half glasses, an attractive option at $15. Corkage is $15.

While the food, atmosphere, and service make this a worthy destination in their own right (so much better than most of the either too-grungy or too-hip places South of Market) the value of the restaurant is really what will keep me coming back for more. Those familiar with Firefly in Noe Valley will understand if I compare The Public to that local neighborhood hideout: excellent, quirky international cuisine at reasonable prices.

How Much?: $70 buys two people appetizers, dinner, dessert, and a three wine flight.

Street parking is plentiful in the area, most nights, but due to many of the clubs in the area, can be tough on a Friday or weekend. The neighborhood is pretty good, but be smart about valuables in the car and walking alone at night.

Reservations are recommended but tables can be had easily during the week.