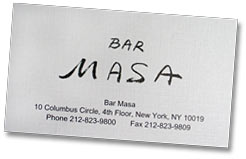 There’s just something I will never get over about going to a fine restaurant in a shopping mall. Even if it is a clinically chic, modern mall like the Time Warner Center. Partly, great eating experiences make you feel special, and there’s nothing like jostling your way down marble halls and up escalators packed with tourists and teenagers to set the wrong tone for your fine dining experience. But that’s exactly where Masa Takayama’s, highly hyped restaurant (which is split into two halves, Masa and Bar Masa) is located. Masa (the main dining room) seats 26, has no menus, and will set you back $300 a pop without wine or sake, that is, if you can get a reservation. Consequently it has gone on the “wish list” of restaurants to visit, and will get a review in its own time. For now, let’s talk about the part of the restaurant that mere mortals are likely to visit with more regularity, and the place Ruth and I happened to pop into for lunch a couple of months ago.

Though you do have to wend your way through the commercial space to get there, Bar Masa has done a good job at creating an atmosphere that leaves all that bright shiny mall world phenomena behind — J. Crew dims as a fading memory, soothed away by soft perfectly placed lighting, earthy palettes, and spare furnishings. You are assuaged with calm when you pass through the traditional hanging cloth “Noren” to enter the bar, which is divided directly in half by a main isle — tables on the left, bar on the right — with more hanging cloth creating a psychological if not physical divide of the two sections. The left wall is made up of large handmade Japanese ceramic tiles lit from above and below by diffuse lighting, the right wall is dark volcanic stone, which contrasts beautifully with the long bar, made from a single slab of African hardwood that just begs, with its dark red color and perfect finishing, to be stroked.

I think Bar Masa had been open for dining mere weeks when we stopped in, which might have accounted for both the lack of diners as well as what unfortunately ended up being somewhat slipshod service. Gaffs like taking my order for lemonade and then coming back several minutes later to tell me they didn’t serve it, and having to clarify our order several times were not things we expected from one of the top new restaurants in the city. No doubt kinks like these will get worked out as operations continue, but you know what they say about first impressions.

Most of that, thankfully was remedied by the meal. The food, which is an odd mix of items that in most cases wouldn’t end up on the same menu at a fine dining establishment in Japan, was generally very well done. The menu ranged from a la carte sushi to tempura; udon and soba to fried rice with Kobe beef. Interested in trying several things, we ordered a selection of sushi to start, as well as some toro sashimi, (which Ruth doesn’t like but is manna from the sea to me) and a small plate of tempura.

Masa gets several things very right for me when it comes to Japanese cuisine. The first is the presentation of the food, which most restaurants in America overdo with garnish: sprigs of daikon, fanned shiso leaves, you name it. Masa lets simplicity reign, carefully choosing the appropriate serving dish for each item — the unique ceramics are shaped, textured and colored to set off the food — and adds very little ostentation. Our sushi was eight pieces of nigiri on an eggshell colored long narrow porcelain tray that turned slightly at the corners, rough like the texture of dried sharkskin. Each dish we ordered was equally considered in arrangement, from the small, square blue plate under piles of tempura to the triangular earthenware that held the simple pyramid of fried rice with Kobe beef that we decided to split as an entree. If I knew more Japanese, and was able to understand more subtleties, I’m sure there are names for all of these types of ceramics, as well as the techniques for pairing them with food based on seasonality and other aesthetic concerns. Lacking that knowledge, all I can say is that Takayama gets it closer to what I’ve experienced in Japan than almost any other restaurant I’ve been to.

The other thing that I must applaud are the ingredients, which make the difference between ordinary and awesome in Japanese cooking. Everything we had was perfectly fresh — fresh grated wasabi with the sushi (sadly all too uncommon in the US), excellent cuts of fish, and snapping fresh vegetables and seafood in the tempura (which incidentally was some of the best I have had in the States). All of the dishes were the epitome of perfection with the exception of the Kobe beef fried rice dish, in which the precious meat was horribly overcooked and a little too salty. It seemed to me that the color of the beef was intentional, so I didn’t bother to send it back, but it was definitely a travesty, and a waste of good Kobe.

The wine list and sake list made available to us was short, though interesting, and I’m kicking myself for not asking to see the full dinner list before I left. The sake selection in particular is full of excellent choices, including a number of the upper echelon labels like Kubota, an old favorite. Presumably the dinner list is even better.

Desserts at lunchtime were simple, including green tea sorbet, and a few other confections that seem to have slipped off my notes. Ruth and I were a little too full to partake in sweets, so I can’t comment on their competence or tastiness.

Despite the service slip-ups and the strikeout on the fried rice, Bar Masa clearly offers some of the best Japanese cuisine in New York, and I certainly imagine it would be in the top few sushi restaurants, had I more experience trying a lot of them.

The evening menu is more extensive and more expensive, so while Bar Masa offers a good alternative to the wallet shredding prices of the main restaurant, if you’re not careful you can easily spend over $100 per person for dinner.

How Much?: Lunch for two ran $90, dinner will be probably twice that.