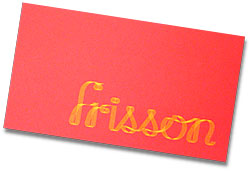 San Francisco has been a dining destination for years, but to those familiar with the New York restaurant scene, there is something categorically different about the nature of dining experiences in New York, especially those that attempt to push the boundaries of style and attitude along with their culinary aspirations. In a nutshell, New York just has many more “cool” restaurants than San Francisco in my opinion.

For those yearning to exercise the outer fringes of their wardrobes and wallets, San Francisco now has a little bit of New York in it, courtesy of newly opened Frisson, the most recent project by chef Daniel Patterson of Elizabeth Daniel and PayPal founder Peter Thiel. The restaurant squarely nails any concept that you might lump under the category of designer chic when it comes to eateries. Everything is clearly targeted to young, upwardly mobile, Prada wearing thirty-somethings who know the names of obscure cocktails and even more obscure Ibiza DJs. Perhaps this is the expected result of a project funded by a young dot-com millionaire. But unlike most of the crap that came and went in those crazy days, Frisson succeeds in its aesthetic and emotional goals brilliantly, even superlatively. Not since Ian Schrager and Philippe Starck opened Asia De Cuba has there been such a clear-sighted fusion of design, art, lighting, sound, and interior architecture in San Francisco. When it tries to add food to that mix, the results are less inspiring, but we’ll get to that in a moment.

In a word, the restaurant is gorgeous. Designed by Scott Kester, who is responsible for Lotus, another late-night eatery in New York, Frisson borrows several of the visual elements (layers of materials, large sheets of glass, lighting from frosted sources) that helped make that venue so distinctive.

After entering the understated door that’s easy to miss for lack of much signage other than the raised brass letters on the awning, a short walk down a dark, narrow foyer brings you to the brink of the wide open lounge and dining room. On the right, past the built-in DJ station that fires up after 10:30 PM several night a week, a low dark seating area strewn with sixties modern lounge chairs abuts the bar. Behind the bar, and lighting the whole area with an indirect tannish-green glow is a massively thick and wide sheet of glass that fronts a photo of thousands of bubbles, frozen and stationary upon close inspection, but likely to seem moving from the standpoint of your peripheral vision after a few of the incredibly strong but uniquely tasty house cocktails.

Next to the bar area, which quickly fills to standing room by seven most nights, sits the wide theater-in-the-round that is the main dining room. Ringed on the outer edge by a series of (a little to closely packed) tables that back up against seamless leather benches, the center of the dining room contains several interlocking booths and tables that seem to afford little organization other than by a single principle: see and be seen. If you happen to be seated in the center of the room, you’ll likely find yourself the object of many a passing glance. There are also a series of tables on the raised platform behind the booths on the far edge of the room, as well as two private rooms in the back that look out on the modern concrete and stone gardens designed by Sean Quickly of Paxton Gate, a tiny, eclectic garden shop in the city.

This dining room is partially separated from the open and incredibly modern kitchen by a wall of loosely interlocking and layered pieces of frosted glass held up by thin brushed stainless rods, creating a wavy, translucent canvas that captures much of the ambient orange and yellow light that suffuses (and colors) the entire room. Capping the whole room is a stunning layered dome of orange and red embedded with pinpricks of shifting light. This dome also had some remarkably spooky acoustic effects last time I was there making voices, and in particular one woman’s laugh, seem to be everywhere and nowhere, so much so that we were half convinced that it was coming from secret speakers in the walls.

I can’t leave off discussion of the interior without a mention of the bathrooms, which are downstairs next to the second (quieter) bar and small lounge area. My dining partners at my last visit remarked that they believed the incredibly dark, single room, co-ed bathroom to be designed expressly for couples looking for a quickie. As evidence of this they pointed not just to the individual privately walled stalls but to the racy imagery and mirrors that festooned each of these little sanctuaries. Not to mention (someone said) the incredibly attractive bathroom attendant who “might just be there to do more than help you figure out how to use the bizarre communal sink.”

The menu turns out to be just as lassie-faire as the bathrooms. Divided into sections (Raw/Cured/Lightly Cooked, Vegetables, Fish, Poultry/Meat, Cheese, and Sweet) with 5 to 8 items per section, you are encouraged to “build your own tasting menu.” Appealing on the surface of things, this structure has some inherent problems. One is that you have no idea how large the individual dishes are. They very considerably in size from bluefin tuna sashimi which was basically three pieces of tuna with a little delicious black pepper gelee and rice vinegar foam to the truffle poached halibut, which was a reasonably sized chunk of fish over fresh chanterelles and a gorgeously bright kaffir lime sauce. Unfortunately prices are no guide in this matter (i.e. pretty much everything is 12 to 18 dollars) so you’re left to your own devices, or to the sparse, bullet point style menu to figure out how much to order and of what. They would be better served by a “small plates, large plates” organization.

If you’re lucky you might end up with a dish like their sweetbread ravioli which shows up in a wide bowl, buried in a light frothy foam sauce scented with black truffles. Soft, earthy and satisfying to the last bite these ravioli’s subtle flavor was beautifully offset by the texture and lightness of the foam. If you’re not so lucky you might opt for the heirloom tomatoes with yellow doll watermelon, Thai basil and ginger, which ended up being all chopped and mixed up to the point of destroying each of the individual tastes and overwhelming them with the ginger. Overall I’d say there is probably an even split of winners and losers on the menu ” Patterson is so clearly talented but it may be that he is trying too hard to push the envelope to keep up with the trendiness of the restaurant. He’s clearly most in his element when he sticks to those dishes that capitalize on his French roots, like the cornmeal crusted foie gras that comes with lavender scented onions with a traditional balsamic reduction or the coriander scented duck breast with escarole and a huckleberry-olive emulsion.

It’s pretty rare that I go to a restaurant and don’t even want to try any of the desserts but I’m sad to say that this was one of the most disappointing areas of the menu ” everything was either chock full of too many ingredients (Banana soufflé with coconut, curry spices and chocolate) or just odd (yellow doll watermelon, heirloom tomatoes, rhubarb and ginger ” hey, that sounds a lot like that appetizer I didn’t really like!).

The kitchen pays a good deal of attention to the presentation of the food, lest it be overshadowed by the immaculate interior design. The tableware is mid-century modern, of course, and the food is beautifully arranged to capitalize on the odd shapes of dishes or with splashes of playful color, or both.

As I mentioned, there’s an array of trendy and special house cocktails to accompany your meal and the wine list is really a treat with excellent and eclectic representation of California and around the world. Bottles ranged from twenty-two to hundreds of dollars with many right in the sweet spot of forty to sixty. Wines by the glass change with the menu and include some really nice options like Neyers 2002 Carneros-Napa Chardonnay and even Casa Antinori’s Tignanello from Tuscany (albeit for $28 a glass). Corkage is $20.

I really have enjoyed my experiences at Frisson, but at they end of the day, I think that is more influenced by the atmosphere than the food. Additionally, a full meal tends to be a bit pricey, once you’ve ordered enough dishes to have your fill. I’ll definitely return, especially to try their late night menu, which apparently brings in some comfort food elements, but more likely it will become a favorite spot for drinks with my graphic designer friends who I can count on to order me a cocktail with a name I can’t remember.

Reservations recommended Thursday thru Sunday. Valet parking is offered but if you look in the neighborhood you can usually find something. Dress is business casual, or hipper than thou.