Here we are at WBW2, the second ever Wine Blogging Wednesday and I’m your host for this episode entitled “Spanish Reds.” Today I am posting my entry into this global online tasting event with this wine, and in the next 24 to 36 hours I will provide a recap of the dozens of other bloggers around the world who have each tasted a wine and written about it today.

I’ve decided to drink and write about this wine from Rioja, perhaps Spain’s most well known winemaking region. This section of the country, which is about 75 miles long and 35 miles wide, is filled with bluffs and plateaus that surround the geologically ancient river Ebro which has cut its way down through this country for millenia. Don’t confuse the DO Rioja region with the Spanish province also called Rioja — the former includes the entire province as well as some of the neighboring provinces of Navarra and Alava.

Someone, I’m sure, knows exactly the first recorded reference to winemaking in the region, but for our intents and purposes 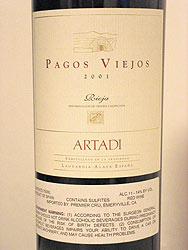 it’s been going on forever — well into the first century BC. Winemaking got more serious in this area, however, when in 1862 the Marqués de Riscal brought a French enologist down to this country to start making wines with the rigor and techniques of Bordeaux.

The introduction of those techniques were the first steps in a long line of quality winemaking that has led to this wine, made by Bodegas Artadi, which began as a small winemaking co-operative in the early 1980’s in and around the town of Logarno. The winery has since been purchased by winemaker Carlos López de La Calle, who now owns and operates the estate which has become one of Spain’s most sought-after names. “This brilliant winery, run by Juan Carlos Lopez de la Calle, has produced some of Rioja’s most elegant yet intensely flavorful wine” says Robert M. Parker, Jr.

The Pagos Viejos (literally “old debts”) vineyard is the most ancient of Artadi’s holdings, and contains 75 year old Tempranillo vines. The winemaking is very traditional with fermentation taking place in oak, often accompanied by small quantities of white grapes (Viura and Macabeo) and then secondary fermentation and aging in new French Oak for 18 months.

This wine is one of the top few, or perhaps the most sought after wine from Rioja, and has gotten a lot of attention from the critics around the world. Robert Parker gives it 97 points and goes on to say:

“… the 2001 Pagos Viejos is one of Spain’s greatest wines. A singular red of extraordinary stature and intensity, it exhibits an inky/ruby/ purple color as well as a luxurious bouquet of lead pencil shavings, black and blue fruits, espresso roast, and floral notes. This full-bodied, dense 2001 possesses layers of flavor, a sweet integration of tannin and wood, and a finish that lasts for nearly a minute. Drink this riveting Rioja between 2005-2015.”

Well, according to Parker, I’m a little bit guilty of breaking it out early, but I wanted to try something that would represent (what some consider to be) the best of what Spain has to offer and share my thoughts with everyone.

Tasting Notes:
This wine is a deep garnet color in the glass, receding to an opaque purple in the center. The nose is not quite as opulent as Parker might lead one to believe, but it is distinct in its aromas of parchment, cherry, a slight metallic element (am I actually willing to admit that it does smell like graphite?) and a hint of something vaguely floral. On the palate it is sumptuous and smooth with tannins that rise to the surface and then dip down again into the texture of the wine. The primary flavors are of cherry and tart umeboshi (japanese pickled plum) and these linger into an exceptionally long finish that brings in a hint of sandalwood or some other exotic incense. Definitely the best Tempranillo based wine I’ve ever had, and a standout after tasting nearly 80 of them last week.

Food Pairing:
I had this wine over the course of a dinner at one of my favorite local haunts, Limon which has just moved into a newer, larger location on Valencia Street. I thought it would be a good pairing with the nuvo-Peruvian fare there and wanted to share this wine with friends. It went exceptionally with the Churrasco style ribeye steak and the pork empanadas among other elements of our fine meal.

I got mine from the Internet (and local Bay Area) retailer Premier Cru who seems to have a few more on hand at this (for some) reasonable price. Because of the Parker rating, people are selling this for as much as $150.