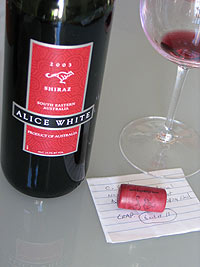 This is my entry for WBW3, the third Wine Blogging Wednesday event online, where folks who have blogs all drink and review wines on the same day. This month’s event is being hosted by Seattle Bon Vivant, so visit with her in the next couple of days for a complete listing of all the participants.

For last month’s event, I drank a pricey, critically acclaimed, upper echelon wine. This month I’m doing the opposite. However, I was unable to get my (lazy) hands on a bottle of Yellow Tail Shiraz which is what I wanted to review. I know, I know! The stuff is everywhere, but today it wasn’t at my local grocery store. I wanted to review it and talk about how their massive marketing and advertising campaigns related to the quality of the wine. Instead, however, I ended up with this bottle of Alice White Shiraz, and instead of a lesson about marketing, this entry is going to be about how to be an intelligent wine consumer, even if you’re buying wines under ten bucks.

HOW NOT TO BUY VALUE WINES
Don’t just pick your wine by the label. I did.

Listen, I do this sometimes, like everyone else. We tend to think that most wines under ten bucks at the grocery store are sort of all alike, and therefore we just pick something that looks interesting, which means basically the one whose label catches our eye. This wine of mine has an appealing label with a nice blocky red pattern, and look it’s got little kangaroos, too! While it’s fine to reach out and reward an innovative firm by placing a nicely designed bottle in your basket, there’s something you MUST do first.

I want you to read the label. Yes really read it, front and back. I didn’t, and suffered the consequences.

Let’s take a look at Alice’s label shall we? We’ve already established that it looks nice. And here it says on the front Shiraz, South Eastern Australia.

This is your first critical judgment. Do you know where South Eastern Australia is? Have you heard of it before, sort of in the same way that you have heard of Napa or other regions like that?

In this case, the answer is definitely NO. You may understand what the words “south” “east” and “Australia” mean, but you have not heard of a winegrowing region called that. Saying a wine comes from South Eastern Australia is like saying a wine comes from The Southwest. We have really no idea where these grapes are from. OK. Our suspicions should be raised.

Turn the bottle around and see what they have to say about this wine. In our case we’ve actually got a cool little story about Nick the safari guide and Alice crossing a river with Crocodiles. Great stuff. I love the idea of injecting humor into the wine business. It’s even got a website for you to visit to continue Alice’s adventures. Excellent marketing, great attempt to make a connection with the consumer.

But down there below that, there are a couple of very telling words. These are words that should be paid attention to. No, not “ACCORDING TO THE SURGEON GENERAL…” above that:

This is not real Australian Shiraz. Sure, sure, it is made, per U.S. Law, from no less than 75% Shiraz, and those grapes have come from somewhere in the half a million square miles that make up South Eastern Australia, but think about what actually happened to them in order for them to end up in the bottle that I’m holding here.

If we are lucky those containers were bottled right away in sanitary conditions without sitting in the hot sun or without being treated by all sorts of chemicals. But we have no way of knowing.

Wine is very fragile. This wine is made in a way that maximizes the potential for spoilage and mediocrity, and even though it is six dollars a bottle, there were other choices that were much more likely to be better at the same price point. So please. Read. The. Label. You don’t need to know much, just what I’ve taught you in the last few hundred words. Be suspicious. This isn’t about being a wine snob, its about being smart about what you buy. If you don’t, you might just end up with this:

Tasting Notes:
This wine is a medium garnet in color and has aromas of wood and alcohol. There’s a tiny hint of some red fruit like cherry in there, but it is masked in the wood and light aroma of ethylene. In the mouth it is flat with flavors that are thin and watery but definitely cherry and plum flavored. Almost all of the varietal characteristics of the Syrah/Shiraz grape have been stripped or beaten out of this wine. I’m highly suspicious that it’s even 100% Syrah. It tastes too much like merlot to me. The one aspect of the varietal that even makes a showing is a slight spicy peppery note on the drearily short finish.

Food Pairing:
I would suggest that if you’re going to drink this wine, which you shouldn’t, that you pair it with pork or beef that has a rich red sauce or spicy element to it.

This wine can be purchased in most major grocery stores.