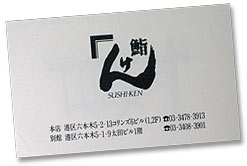 Perhaps it also holds a fond place in my heart because it was the first sushi I ate in Toyko, in the capable hands of a CEO business partner, and it introduced me to a whole class of fish (and also different types of fish) that I had not imagined existed.

Sushi Ken is actually two restaurants, one right across from each other. One is a private, “members only” venue, which was where I had my first meal with them, and the other is open to the public. I don’t know what’s involved in “membership” but I wouldn’t be surprised if it’s years of patronage, a private invitation, and a heck of a lot of money. Luckily for us mere mortals, there’s no perceptible difference in the fish, service, or atmosphere between the two, and if anything, the public restaurant tends to be a little more smoke-free.

Once you open the nearly unmarked sliding wood door, the restaurant reveals itself quite simply. It is just a sushi bar ” three angled slabs of wood with 20 or so seats carefully spaced along their length, glowing with the warm golden color of the milled wood that is also found on the walls and ceiling. You are likely to be greeted inside by one of the few staff and the sushi chefs behind the bar and then shown to your seat, either at the downstairs bar, or the smaller, more private one upstairs. You will be handed a hot towel and then as the staff quietly disappear it will just be you and the chef.

I have never received nor seen a menu at Sushi Ken. This is sushi at its most elemental — your menu is largely sitting in front of you available at your request, or even better at the chef’s whim. Some of my most memorable meals here have been simply the result of sitting down, spreading my hands and asking to be taken for a ride. Admittedly this sort of setup can be a little nerve-wracking for those who are worried about the price of the final bill or who are uncomfortable ordering in Japanese or patiently negotiated broken English.

For those willing to place their trust (and pocketbook) in the competent hands of the gentlemen behind the counter, however, I can promise a meal of sushi that has yet to be equaled in my experience. You are likely to start with some paper thin slices of hirame (flounder) sashimi lightly drizzled with a yuzu (Japanese citrus) infused oil and a sprig of flowering shiso blossom. This might be followed with the freshest of ama ebi (sweet shrimp) picked kicking from their shells and placed unadorned on the plate in front of you while the chef grates fresh wasabi on a small board covered in sharkskin. Make sure not to miss their toro (fatty tuna) which is purchased fresh most mornings at the Tsukiji fish market, only hours out of the ocean, and their katsuo (bonito) which might be served as fresh sashimi or as tataki — lightly seared and drizzled with a light soy, sesame, and vinegar dressing with fresh chives. Longneck clams, amberjack, squid, snapper, this review could easily become a litany of fish. Each is treated with care and arrives generally bare of any embellishment save a hint of fresh wasabi or judiciously garnished with a pinch of ginger or a shred of shiso leaf.

To accompany your meal, which if you’re in the mood can last a couple of hours, Sushi Ken offers beer, along with a modest selection of some of the finest sakes available. This is one area where delicately asking the price might be wise to avoid mistakenly ordering something that will run you into astronomical territory. It is all served cold, of course, poured from large brown bottles whisked out from well-hidden coolers behind wall panels and underneath counters.

You can only last so long in the progression of one delectable morsel after another and so eventually you will have to use one of the many universal polite gestures or sayings that convey that any more food would be a dangerous thing. With a smile and a nod, the chef will signal for your check, and while you wait for it to meticulously tabulated by hand, he will likely slip you a toothpick and small wedge of melon, a slice of pear, or sections of citrus to clean your palate and offer closure to the meal.

It’s a little difficult to write reviews of sushi restaurants, especially those which serve only raw fish, for their genius lies in only the smallest of details, many of which go unobserved, or seem less than extraordinary when described in writing. What does it mean to say that plated dishes arrive on exquisitely crafted ceramics, or that the soy sauce is the highest grade possible and not available to the normal consumer? These are tiny elements of the meal but they are variables which are fully controlled and calculated at Sushi Ken to help craft a meal which in total is unmatched in my experience.

Major credit cards accepted. There is no official dress code, but you may feel uncomfortable in anything less than smart business casual. Reservations are taken (in English depending on who you talk to) and are recommended especially on Friday and Saturday.