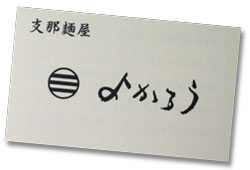 To say that I have eaten at Yokaro more than any other restaurant in the world might be an outrageous sounding claim, given that it is a tiny little outfit found in a couple back alleys of Tokyo’s business districts, but it’s likely to be the truth. Over the course of the 18 months I spent living and working in Japan, I probably ate at Yokaro two or three times per week at a minimum. The scary thing is that I have ordered the same thing, starting from my first experience there to my last.

Ah, my first experience. One doesn’t forget revelations, those experiences that totally transform an accepted reality into something entirely different and new. When that first steaming bowl was placed in front of me I had little idea what I was in for, because in my heart I already knew what it was that I was eating. I had eaten it many times before, late at night or, more often, in the early hours of the morning after studying in college. The instant meal. The broke student’s savior. The answer to the munchies. The nearly weightless package that managed to fill you up. Boiling water. Flavor packet. Noodles.

In a word: Ramen.

In truth, I, like most Americans who have ever seen, eaten, or fed their children the contents of that little orange or red plastic sleeve, hadn’t the slightest idea what ramen actually was. As I dipped my spoon and chopsticks down into that first reddish steaming bowl with its thin yellow noodles, fresh scallions and chunks of meat, and then brought the savory, spicy concoction to my lips I knew (if you permit me a little melodrama) that like the denizens of Plato’s cave, up until that point I had only experienced the mere shadow of reality.

Ramen really is an entire cuisine, a food group, a cult, a movement, an industry, an art, and the best damn meal for under ten bucks anywhere in Japan. Did I mention, the nectar of the gods? Forgive me as I wax rhapsodic.

On a trip to Tokyo or most major metropolitan areas of Japan, a sharp-eyed, interested visitor in the right neighborhoods will see small shacks, storefronts, and alley doorways lined with Japanese salarymen patiently waiting their turn to hunch over a counter for the few minutes it takes them to slurp (noisily of course) a meal on the go between business meetings or after work but before the commute. If you’re out on Friday nights until 2 AM you might also catch the party set trying to offset the effects of a few too many drinks with a bowl or two in the wee hours before catching the last train home or opting to wait it out until the first train of the morning.

Ramen is not just a primary food group for businessmen and party-ers, however. It’s popularity goes way deeper than that, deeper than a love for any foodstuff I have seen in America. Lest you think I am descending into the fanciful here, I ask you if there is any single food item in America that can boast:

1. A national museum dedicated to the food, which, when it opens in the mornings on the weekends has a line of eager patrons snaking for hours around the block. This museum has about 12 ramen restaurants in it, each chosen via a rigorous national competition as the best restaurant representative of the distinct regional variations of ramen.

2. Distinct regional variations (I’m unclear on the exact number, but it’s somewhere between 12 and 30) in the ingredients, preparation, and presentation of the food, that are well known by a large percentage of the eating public.

3. More than one magazine dedicated to reviewing, rating, cataloguing, discovering, and discussing restaurants and chefs which only serve that cuisine.

4. Eating clubs for the food with highly coveted memberships

The list goes on but I risk boring you. You get the picture. Let me instead return to the restaurant and the particular bowl of ramen in question.

Yokaro specializes in a type of ramen that is actually closer to the Chinese roots of the dish than what is typical in Japan today. The broth is a bit spicy (which is not typical of the Japanese variety) and is made with Chinese wine along with a stock made from beef, chicken, and pork, soy sauce, and several other ingredients which I have not the skill to identify nor the language skills to ask about. The noodles are thin and wavy, about the diameter of angel hair pasta, and lying atop them is your choice of topping ” mine is always the roasted, then stewed chicken.

It is this combination of three elements, the broth, the noodles, and the topping which constitute your basic bowl of ramen, and which allow you to distinguish the regional styles from each other, as well as the good from the bad. Like pasta, the noodles should taste fresh, and be firm without being mushy. The broth (typically either soy sauce or miso based) should be steaming hot, well-spiced and dynamic in the way you would expect any great soup to be, and with just the right balance of richness (read: fat) and liquid to coat the noodles with flavor. The toppings (which range from raw to cooked, meat to seafood to vegetable, ordinary to bizarre) should be fresh and delicious on their own, complementing and contrasting the flavors and textures of the broth and noodles. When you eat, you slurp your noodles (drawing air into your mouth to cool the noodles) and you typically finish them and your toppings, leaving the remaining broth (and its thousands of calories) in the bowl.

Yokaro prepares every bowl of ramen fresh to order (as any real ramen shop will do) with top quality ingredients. Some of their stocks and cooked toppings are often simmered and stewed for days with care before serving. On some days, they also prepare fresh gyoza (pot stickers) (indicated by a small sign posted on each table), but most of the time they offer a simple numbered menu of about 12 choices of ramen ” different combinations of toppings and a choice of two types of broth. For me, the choice is always the same: #3.

Like any great restaurant, even the small accompanying elements to the meal are excellent. Diners with bigger appetites, or those who deem a meal incomplete without it, are welcome to a complimentary bowl of plain steamed rice which can be garnished with small bits of yellow pickled daikon radish, which are my favorite of the myriad ubiquitous pickled vegetables served with bowls of rice in Japan. If you feel like having a drink, Yokaro offers Asahi beer and my favorite sake: Kubota Manju ” a gorgeously floral semi-dry sake given the highest quality classification: dai-ginjo.

There are several branches of Yokaro around Tokyo. During my time there I tended to frequent the branch in Toronomon, which was closest to my office, but that branch was only open for lunch during the weekdays, so on the weekends I would have to brave the tourist and American G.I. ridden alleys of Roppongi to get my fix. The Roppongi branch is probably the easiest to find for anyone who cares to visit, being a few steps from the main Roppongi subway stop on the Hibiya line.

This is a working class dish, and you should expect a working class environment. One does not go to Yokaro, or any ramen shop for that matter for the service or the ambiance. If you find your way there it will be for one thing and one thing only, to experience a classic example of one of the great dishes of Japan.

If you’re having trouble finding it, look for a sign that matches the circle with the three bars on the business card.

Cash only, no reservations accepted.