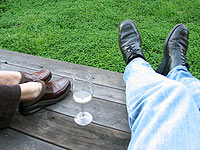 This is my entry for WBW4, the fourth installment of Wine Blogging Wednesday, which this month is being hosted by Derrick over at An Obsession With Food. Derrick is a huge fan of Alsace, Austrian and German wines and so it’s no surprise that he selected Riesling as the theme for this month’s virtual tasting event. That would have been fine with me, even exciting, but the bugger had to go one dastardly step further and tell us it had to be New World Riesling, ruling out the whole set of wines that he likes, and even worse, ensuring that I would have to drink something I despise.

You see, I have only ever had one Riesling from the U.S. that wasn’t a syrupy, lifeless glass of wine schlock (and in the exploratory spirit of the event I didn’t want to select that particular wine I knew). Most American producers seem to think that it’s just a dessert wine, and go about making high glycerin fruit bombs that are fairly one dimensional. So it was looking like I was facing pretty dire prospects.

Of course, “New World” means anything except for Europe, but I don’t know much about Canadian wines (of which Riesling is a pretty popular varietal) and more importantly I haven’t seen any for sale in the places I normally shop. I would have been in quite a bind were it not for Australia swooping in to my rescue. Lucky for me Australia not only is a source of high quality Riesling, they are also known for making it in a style that is much closer to the European standard: crisp, not too sweet, and delightfully complex in flavors and aroma.

I was doubly pleased, and a little smug, then, to find that one of my favorite Australian white producers also made a Riesling. One of the first wines I reviewed here on Vinography was a Leeuwin Chardonnay, and I’ve had many since.

It was an absolutely gorgeous weekend after the Thanksgiving holiday, so Ruth and I decided to hang out on the back porch in the afternoon over a glass of wine. My backyard (the last remaining piece of work in my perpetual remodel of the house) which ordinarily is a jungle, takes on a remarkable Zen garden aspect once the rains start and the clover takes over.

So with books in hand, a couple of wineglasses, and the bottle of Leeuwin Riesling we had ourselves a nice afternoon until it got too cold and we had to move inside.

Leeuwin Estate is a small production, family-run estate located in the Margaret River Appellation in Western Australia. The estate, originally a cattle farm, was founded in 1972 by Denis and Tricia Horgan with the help of none other than Robert Mondavi, who was a personal friend of the Horgans. Margaret River is a coastal appellation which benefits from a climate similar to that of Bordeaux, with the added advantage of a slightly longer growing season, which the locals claim helps to create a larger number of 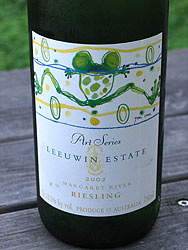 vintages whose conditions would be called superior in Europe.

Leeuwin makes a large number of wines, which they divide into two (and more recently, three) labels, their “Prelude Vineyards” estate label, the newer “Siblings” label for their Sauvignon Blanc blends, and their Art Series label, to which this Riesling belongs. The Art Series wines are their more premium wines, from select blocks within their vineyards, and generally those which are expected to be ageworthy and collectible. These wines are labeled with striking, often humorous works of art — witness the sprawling frog on this one — that make the bottles attractive and fun to look at whilst quaffing.

The official tasting notes for this wine are as follows:

The 2002 opens with intense aromatics: the perfume of lime and citrus flowers in general are immediately apparent. There is also a fruity fullness like sweet grapefruit underpinning the lift adding volume and depth to the nose.

The palate is richly citrus and clean with the natural acidity perfectly balancing the fruit.

This wine is great drinking now and though lovely and fresh on its own cries out to pair with some delicately flavoured seafood.” 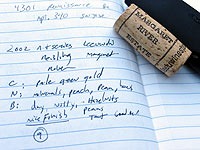 I’ve done a little searching to see if I could find some data about the winemaking or harvest for this wine, and the estate’s Web site is not particularly forthcoming. However, it’s probable that this wine was picked at fairly high sugar levels and fermented in steel tanks. I suspect that the wine also went through secondary fermentation in these tanks, leaving no residual sugar (to my immense pleasure), and was then aged for a short period of time in French Oak barrels, of which most were probably relatively well used.
Here’s what I thought of the wine.

Tasting Notes:
This wine is barely a pale green gold in the glass, nearly colorless, with an aromatic nose that incorporates notes of wet stones/minerals, unripe peaches, honey, and ripe wheat. In the mouth it is (praises be!) dry as all hell, with a ripping acidity that leaves my mouth zinging and tingling. The flavors on the palate are an interesting balance between nutty (hazelnut?) flavors and tart pear/apple flavors, which lean towards young apples as the wine opens up. The finish is excellent.

Food Pairing:
The winemaker recommends seafood with this wine, which is understandable — it would be a slam dunk with a sole meuniere or comparable white fish done simply with butter and a touch of cream. However it would also be a great wine to serve with poultry, perhaps something to keep in your back pocket for next year’s Thanksgiving dinner.

I got mine at the Wine Club in San Francisco. Looks like it’s available from several other Internet retailers. Try Froogle.