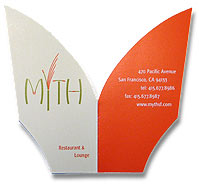 In trying to gauge my own reaction to the recently opened Myth, I recall my first experience of Restaurant LuLu nearly 10 years ago. At the time, this recently opened restaurant seemed, well… effortless. It knew what it wanted to be and managed to nail it perfectly, crafting an atmosphere, a menu, a wine list, and an overall experience that were its own, and both confidently and pleasingly so. This is not to say it achieved anything close to “perfection” (whatever that meant to my culinary sense then or now) but merely that it was the right thing, in the right place, at the right time ” a complete package of cuisine and aesthetic that I found myself more than a little in love with.

My standards for food and for design have evolved since the early Nineties, and my affections for Lulu have waned. I have not forgotten though, the feeling I was left with at the end of that first meal there, and it was with the same triumphant feeling that I completed a meal recently at Myth Restaurant and Lounge, leaving the restaurant with a glowing feeling that had me whispering to myself, “wow, that was fantastic.”

Myth opened about 10 weeks ago in the space vacated by MC Squared, in the heart of the Jackson Square antique and design district just down the hill from North Beach. Rather than simply repurposing the space and overhauling the kitchen, Myth is a complete transformation, a wholly new restaurant that makes the most of a space that never quite worked at MC Squared. And what a transformation. I hesitate to make sweeping statements like “this restaurant matches my design aesthetic completely” but I struggle to find anything about the restaurant design that doesn’t meet my approval. A mix of Norwegian, Asian, and Italian modern influences, the space uses gorgeous wood, exposed brick and iron beams, touches of bright stainless steel, stained glass, a little bamboo here, and fantastic halogen lighting to create a dazzling yet refined overall impression, courtesy of Architects Michael Guthrie & Co.

The restaurant’s overall atmosphere sits somewhere between a bustling bistro and an intimate dining experience, perfectly embodying the overused but appropriate phrase “casual elegance.” The space is relatively wide open, and sound carries a little from the probably 30 tables that occupy the main dining room, so there’s not a quiet, hushed sense that you might get at other restaurants which are as ambitious and serious about the food, yet this is clearly not the zoo you expect at Boulevard or Chez Papa.

The semi-open kitchen occupies a good portion of the Western side of the restaurant and a decent sized bar/lounge area takes up the Eastern section, divided off from the main dining room by a row of freestanding cube-like wooden booths that are surprisingly well integrated to the overall space, considering there’s no other seating like it anywhere else in the restaurant. Apart from this main bright dining room, the restaurant has some lovely glass and brick partitioned smaller rooms, which can be filled with diners looking for a little more intimacy, or by private parties. The largest of these rooms was completely private and seemed like it could easily seat 25.

Myth is the first major solo venture in San Francisco by Sean O’Brien, former Sous chef at Gary Danko and the experienced Tom Duffy, owner/manager of Spoon (now Tablespoon). These two have created a venue that is billed as a restaurant and lounge, but unlike its neighbor Frisson, they haven’t let the hip-ness drive the menu to a point of confusion.

The food, in a word, is outstanding. The menu (which I am told will change every few weeks) provides the opportunity to dine either in traditional three-course style, or should you care to sample a bit more of the fare, in small plates, with many of the entrees offered as half portions for about half the price. O’Brien has put together a menu that is classically California/French with a variety of forms (appetizers, soups, salads, pastas, pizzas, as well as main courses are on offer). The main courses are evenly split between seafood and meats — vegetarians may want to take note, there were only a couple of veggie items on the menu the night I went: one pasta and one salad.

I started with a smoked salmon timbale with Dungeness crab, rock shrimp, apple, and avocado mousse. I’ve had a lot of poor tartars lately, and they’re beginning to get quite tiresome and clichéd. This little roll of salmon stuffed with tasty seafood, was light and pleasing, perfectly fresh, and free from anything that might interfere with the fresh flavors of the dish. The dish didn’t elevate the form, but it was delicious and beautifully, even artfully presented. My dining companion insisted I try his appetizer, and I was glad I did. While I don’t normally enjoy raw oysters with anything other than a little lemon juice, his Kumamoto oysters marinated in cilantro and lime with Yuzu Tobiko were simply stunning, both in taste and in presentation. The Yuzu Tobiko were bright green against the silvery grey of the oysters and the textural opposition between the caviar popping in your mouth along with the sensual smooth briny oyster was delightful. It was at this point in the meal that I really started to sit up and take notice (as well as wish that I had ordered a few more appetizers). Other starters on offer included a warm sweetbread salad with bacon, sherry vinegar, Shiitakes and grain mustard, a foie gras mousse with pear chutney, pistachios and pomegranate seeds, and a roasted pumpkin bisque with spiced Quince and smoked duck.

We skipped over the pastas and pizzas and went straight for the main dishes, but I savored the descriptions of entrees like Garganelli pasta with foie gras cream and Marsala, and risotto with butternut squash, cauliflower, black trumpets and white truffle oil. I opted for a rousted poussin (young chicken) with gigante beans, Blue Lake beans and a mustard rosemary sauce, while my friend went for the mushroom dusted scallops with black trumpet mushrooms and potato puree. My chicken dish was excellent. It had an impeccable, intact, crispy, thin skin that burst with the flavors of mustard and rosemary, and juicy, perfectly cooked meat, carefully paired with two kinds of beans that were also perfectly cooked and lovely earthy accompaniments to the salt and spice of the chicken. By the time I looked up from my bird, my partner’s entrée had been decimated, so I can only report the satisfied look and low frequency “Mmmmmmm” I got when I enquired about its flavors.

The cooking here seems perfectly poised between dishes and flavors that play between comfortable and hearty and something more refined. There is nothing avant garde going on in the kitchen — no boundaries are being pushed here, and there aren’t sculptors and technicians whipping up dazzling visual presentations for the dishes — yet this food is decidedly not ordinary. Rather there is a subtle enhancement going on with many plates: small bits of more exotic ingredients, a powerful aromatic effect here, an unexpected combination of textures there, all of which speak to an accomplishment and control in the kitchen that bears watching.

The wines that have been selected by sommelier Alex Fox to accompany the food are competent and of high quality. The by-the-glass selections managed to avoid the pitfalls of being too ordinary and were reasonably priced as well as diverse. The bottle list is not extremely extensive but it has a breadth and depth that will satisfy most discerning palates, both those who are looking for California wines and those craving some European flavors to (more appropriately in my opinion) complement the food. Selections range from the low $30 range to wines in the several hundred range. The cellar has a few older wines in it, but this is not the place to go looking for deep coverage of past vintages.

Service at Myth is smart and crisp, and well up to fine dining standards, which is sadly not something that you can expect at all restaurants of this class in San Francisco. Our server, and the others that I managed to overhear, were very knowledgeable about the food and the wine list. All were able to recite ingredients and preparation methods, as well as know which wine I was talking about without having me point it out on the menu. I found this commendable especially considering they were still within their first couple of months of business.

For dessert, the restaurant offers a trio of artisanal cheeses as well as several other daily made creations. Notable among them were a lemon custard cake with Huckleberry sauce and a citrus tuile; apple bread pudding with maple sauce and orange blossom mousse; and what I ordered: a pear and dried cherry clafouti with a honey roasted pear and some Armagnac ice cream. I’ve made clafoutis many times myself and was surprised when what I ordered came out looking nothing like the custard-style tart I was expecting. Instead it was cake-like with small bits of the advertised fruits in it ” delicious, but suspicious in its advertising. The ice cream was a perfect accompaniment, though, and almost made up for the disappointment. I was pleased to see that the restaurant also offered a Rieussec Sauternes by the glass, along with vin santo and a 1981 reserve Austrian wine I had never heard of, but plan on trying next time I’m there.

While the dessert course was competent, I didn’t have the same excitement reading the menu as I did for the rest of the dinner. The desserts sounded good, but seemed a little predictable, lacking a little of the inventiveness and unique touches of the rest of the meal. The fact that this is the primary criticism I have to level at the restaurant, though, hopefully indicates the quality of the experience. O’Brien and Duffy have clearly set a high bar for themselves and are delivering an great dining experience. I will no doubt be a frequent patron, and feel confident that they will quickly find the same loyalty in many discerning patrons around the city.

(Side Note: Apparently the restaurant also offers a Chef’s table which I’m very tempted to check out given the tantalizing glimpses I got on my first visit into the high-tech and well run kitchen and the quality and care of the ingredients that have been put into the food).

How Much?: Appetizer, main, dessert and two glasses of wine will set you back around $70 per person.

Reservations recommended, but the space is large enough that walk-ins shouldn’t have a problem during the week.

Valet parking is $5 but you should be able to find something in the area fairly easily.