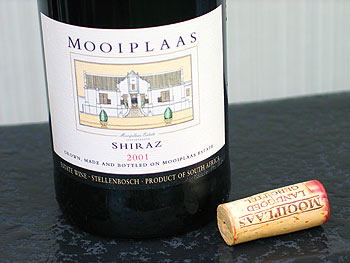 This wine review is my entry in this month’s Wine Blogging Wednesday tasting event (#6), hosted by Cook Sister. This month, our theme is South African Reds.

Winemaking has been around in South Africa for a long, long, time. Even though it is lumped in with the rest of the “New World” winemaking regions (i.e. everywhere but Europe) grapes have been crushed and fermented there since the mid 1600’s by the various settlers (primarily Dutch) that colonized the region at that time. Like many regions around the world, South Africa has had its ups and downs when it comes to wine production: Phylloxerra, the Boer wars, and Apartheid all affected the production and export of the region’s wine.

These days, South Africa is a booming wine region that is getting increasing recognition from the international community. In the past 3 or four years, select wines scores have been creeping up past the 90 point “barrier to attention” from critics such as Robert M. Parker, Jr. and Wine Spectator. Some say that it’s only a matter of time before the region becomes the next hottest thing, and all it will take is a couple of wines rated in the 95 point zone.

South African wine is made in 12 distinct appellations: Olifants River, Piketberg, Swartland, Tulbagh, Paarl, Stellenbosch, Cape Town, Worcester, Robertson, Swellendamm, Klein Karoo, and Overberg. The two best known (and best producing) regions are Paarl and Stellenbosch, which is the smallest of the group. This appellation has a typical Mediterranean climate, with warm days and cool nights, and a moderate level of annual rainfall. Within its boundaries the terrain is a set of rolling hills that back up against the Stellenbosch mountains.

Tucked into a set of northern exposed inclines known as the Bottelary Hills sits Mooiplaas (literally “beautiful farm”), a family-run farm established in 1963. When the current proprietors, the Roos Family, moved in, records showed the property had been producing wine for nearly a century, and most believe for much longer.

Throughout the Sixties, Seventies, and Eighties, the farm sold all of their grapes to other wineries, but in 1995 they began producing their own wine under an estate label and never looked back. Today they have a recently constructed tasting room on the premises and they produce slightly less than 10,000 cases of wine, of which 60% is exported. Mooiplaas, under the direction of owner and winemaker Louis Roos, makes a Shiraz, a Cabernet, a Sauvignon Blanc, and a Pinotage, the unique crossbreed of Cinsault/Hermitage and Pinot Noir common to South Africa.

This wine spent 16 months (too much?) in French oak barrels before being bottled.

Tasting Notes:
This wine is a medium to dark ruby color in the glass with bready aromas wrapped around a core of cherry and mulberry scents. In the mouth it has primary flavors of cherry and oak with hints of leather and oak in the finish which at first was slightly hot, but smoothed out after an hour of air. The wine is lighter in body than I expected given its color and nose, and the mouthfeel is a little flat, lacking some acidity and glycerin that would make it more sumptuous. It also tastes like it was unfiltered (a good thing) having a hint of fine suspended sediment in the wine.

Food Pairing:
This wine would be an excellent accompaniment to a grilled leg of lamb with rosemary salt.

I got mine locally at The Ferry Plaza Wine Merchant. Looks like it’s tough to find online.