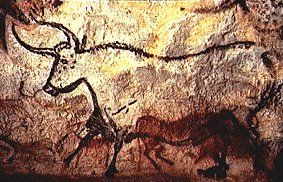 OK. So I bought another wine because of the label. And because I’m into Languedoc wines these days. And because it was imported by Kermit Lynch. But really? I bought it because of the name and the label. You see, I have a thing for Lascaux, the gorgeous cave site that hosts a massive mural of 18,000 year old prehistoric art beautifully preserved into modern times. I’ve never been there, but some of the figures from the wall, including the small horse which adorns the label of this wine are indelibly etched in my mind.

Some day I will make it to the southwestern part of France where Lascaux and countless other caverns of limestone contain treasures from the earliest times. Until then, though, I am content to close my eyes and experience the terroir of the place through wines like this one, produced by Chateau Lascaux which sits (a good deal to the south of its namesake) in the herb studded scrub forests between Montpellier and Nimes in the South of France at the base of the Cevennes mountains.

Chateau Lascaux was founded by Jean-Benoit Cavalier in 1984. Cavalier has planted small vineyard plots in the gravelly soil separated here and there by swaths of bay trees and herb gardens, which he feels add complexity of flavors and scents to his wines. Sheltered by the mountains from most of the cold from the north, but at an elevation where nights and occasionally breezes are cool, Cavalier found what he considers to be an ideal Mediterranean climate.

Chateau Lascaux grows primarily Grenache Noir and Syrah (both of which figure heavily in this wine) along with smaller amounts of Roussanne, Viogner, Rolle, and Marsanne. Most of the wines are made in a traditional style, fermented at relatively cooler temperatures, and for reds like this one, aged in new French oak barrels for time periods up to 12 months before bottling. The Lascaux property bridges two primary appellations Pic Saint-Loup and Coteaux du Languedoc.

Tasting Notes:
Dark ruby colored in the glass this wine has a bouquet of primarily dark aromas of sweet wet earth, mushrooms, and leather. In the mouth it hangs in a nice balance between the dark flavors of cassis fruit and figs and the more tannin wrapped flavors of black tea, and earthy minerality.

Food Pairing:
I always like to pair wines that have a strong earthy element to them against dishes that are slightly sweet or fruity, as I like the contrast and how they play off of each other. I’d be tempted to try this wine with grilled Korean style short ribs.

You can find an online retailer for this wine here.