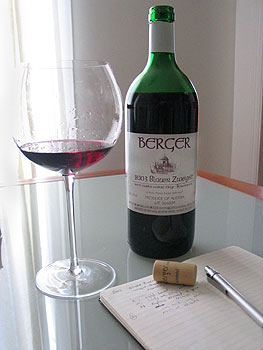 Not simply content to enjoy standard wines like Cabernet Sauvignon or Pinot Noir, there are those who seek out the elusive, the exotic, and the backwoods wine varietals. While it is not the driving force in my wine exploration, I always jump at the chance to taste wines made from unheard of grape varieties. I was mighty pleased, then, to participate in this month’s Wine Blogging Wednesday, our monthly Internet tasting party that has this month taken the theme of “Obscure Red Varietals.” Thanks to Andy over at Spittoon.Biz I’ve been forced to hunt down something I’ve never tried before, a varietal known as Blauer Zweigelt.

Zweigelt, also known as Zweigeltrebe, is a relatively recent addition to the world’s panoply of grape varietals, thanks to the work of Dr. Fritz Zweigelt in 1922 as part of his biological research at Klosterneuburg, the unofficial center of viticultural education and investigation in Austria since 1860. Zweigelt is a cross of two older varietals, Blaufrankish and Saint Laurent, both of which are two of Austria’s most popular red grapes. Zweigelt is grown all over Austria and more recently in Germany and even the UK.

Winemaking in Austria has a long history. Archeological evidence places the earliest winemaking activities in the area around 700 BC, but was really established heavily during the Middle Ages by Cistercian monks and their monasteries in Bavaria. The modern wine industry in Austria is spread across a varied landscape of appellations, one of the most famous of which is Kremstal. Kremstal centers around the town of Krems which has had a school of viticulture since 1875 and which is known best for its Gruner Veltliner and Reisling as well as another local specialty wine, Roter Veltliner.

Not far from Krems, the small town of Gedersdorf houses the winery and guesthouse Weingut & Gasthaus Berger a small family run operation that has been in business since 1970. Starting with about 14 acres, the family has slowly built their holdings and production up to nearly 40 acres. Originally a producer of Gruner Veltliner and Reisling, the Berger family has started to produce small quantities of Chardonnay as well as two bottlings of Zweigelt, with plans to also produce a Cabernet in the future.

This wine is traditionally barrel fermented and aged, though I do not know for how long. Of the two Zweigelts that the Berger family produces, this is their lower tier wine, and as a result it receives less barrel aging, and is bottled in one liter bottles, rather than the 750ml we are all familiar with. As a result it has an imposing presence on the table.

Tasting Notes:
Light garnet in the glass, this wine has a heady nose of redcurrant and sweet oak with a slight hint of ethyl alcohol that gives it a slight unpleasant sharpness. In the mouth it tastes of sour cherry, redcurrant, and rosehips with a bright acidity and a bit of zingy spice in the mid-palate. It is basically tannin free, and has a surprisingly long finish, though one that has a hint of old socks in it. Had I tasted this blind, I would have probably guessed it was a pinot noir. It has much the same flavor profile albeit with a little more spice to it. I can imagine that this grape would actually make some very interesting wine.

Food Pairing:
I would suggest treating this wine much as one would a Pinot Noir or a young Tempranillo. That said, you might try pairing it with something vaguely Austrian, like this tasty goulash soup.

This wine can be found online at several retailers.