The Best of Napa Wine: A Report From Premiere Napa Valley Auction 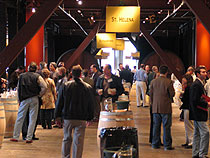 “And people wonder why Napa wine is so overpriced,” says the guy next to me. He’s half joking, but both of us have just seen five cases of Rombauer Cabernet Sauvignon sell for the mind numbing sum of $50,000. When the stuff is selling at ten grand a case, it’s hard not to wonder how in the world Napa seems to justify such excess. Yet thoughts like that seem to be few and far between in this rapt crowd of hundreds on a Saturday afternoon, and it’s easy to understand why. Napa is one of the world’s most famous wine regions, and today some of its most famous producers are offering to sell small lots of specially crafted wines to the highest bidder. This is Premiere Napa Valley 2005, the most exclusive and anticipated wine auction in the United States, and by the time the auction is over, retailers, restaurants, and distributors will have laid out $1.46 million dollars to get their hands on 165 one-of-a-kind wines.

Once upon a time there was the Napa Wine Auction. Put on by the Napa Valley Vintner’s Association every year since 1981, this event originally was a low key, mostly local thing, where wealthy residents and members of the trade would get together and spend a lot of money for charity by purchasing lots of wine from various Napa wineries. A victim of its own success, this auction, still held every June, has become THE event in California Wine Country and the worlds largest wine auction with celebrity spotting, drunken revelry, and big cash laid out for wine. Last year it made a whopping $5.3 million dollars for local charities. Because of the massive scene it generated, members of the trade clamored for a lower key auction where they wouldn’t have to compete with Anonymous bidders from Hong Kong willing to drop $200,000 on a few bottles of wine. In 1997, they got their wish and Premiere Napa Valley was born.

Here’s the way it works. Attendance at the event, held at the Culinary Institute of America’s Greystone Castle in St. Helena, California, is by invitation only to people who have liquor licenses (e.g. distributors and retailers) and select members of the media. 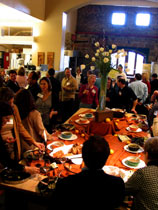 Member wineries of the Napa Valley Vintner’s Association donate special lots (5 cases, 10 cases, or 20 cases) of wine that are totally unique, and put them up for auction. In the morning, prospective bidders and all attendees get the opportunity to barrel taste each lot (many of which will not be bottled for another 6 to 12 months). Donation is completely optional, but for some wineries it’s an important thing to do.

“This is only our second vintage,” said Kathy Bourassa of Bourassa Vineyards, “Premiere will hopefully get us some recognition and it might help us pick up another distributor, which we could use.”

“You have to understand that the wine business is about personal relationships,” said Joe Cafaro of Cafaro Cellars. “I’m here to see people on a one on one basis. The Napa Valley Auction [in June] is a big party now. Here I can visit with buyers, and shake their hands. And the extra visibility is a plus, too.”

Several wineries were hoping to use the event for exposure. Susan and Duane Hoff of Fantesca Vineyards shared that “we’re really here to get the brand started. We have a good story to tell.” 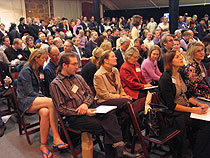 Unlike many large tasting events I have been to, nearly every winery was represented by the owners or the winemakers, who were all excited to talk about the wine, their work and the event. I actually tasted through nearly all of the wine lots (I missed about 10 or 12) and I share my scored below.

The barrel tasting is followed by a gourmet lunch made in the CIA’s test kitchens (over 100 wines are available to drink at lunch), and then once everyone is sated and sauced, the auction begins.

The auction works much like you would expect if you’ve ever been to a live auction people are seated and standing, and prospective bidders have paddles with numbers on them which they raise to make a bid, while spotters rented from Bonhams & Butterfields make sure the auctioneer catches every bid. The bidding can be fast and furious at times, though unlike several serious wine auctions I’ve been to, this one seems injected with a casual humor that resulted in bursts of laughter many times, as eager bidders short circuited the bidding process by yelling out “ten thousand!” or when one of the auctioneers lost her concentration and yelled out the wrong price. 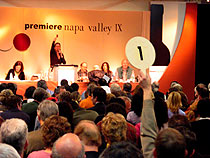 The prices paid for these various lots of wine, which included things like 5 cases of Cabernet picked from the sunniest part of Shafer’s Sunspot Vineyard, 10 cases of a Malbec made by Conn Creek Winery, or and entire barrel of a custom Bordeaux-style blend from Raymond Vineyard and cellars, can’t be described as anything short of astronomical. Even the cheapest lots don’t go for less than about $60 per bottle, and remember, that’s the equivalent of the wholesale cost, as the bidders must then turn around and sell these wines to their customers.

“I never have a problem selling any of these wine. Are you kidding?” said Gary Fisch, of Gary’s Wines and Marketplace in New Jersey, this year’s (and last year’s) top bidder. “These are some the best wines in the world, at any price,” said Fisch, who has customers so faithful and confident that they are willing to give him a flat sum of money, say $10,000, to bid with and they will take whatever he gives them in return, whether it’s 3 special bottles, or a mixed case of the things he buys. “This is the eighth year I’ve been doing this and by now I have a lot of customers who see these wines as special. The wines that I don’t sell immediately, I hang onto and sometimes bring to charity events, or I can incorporate them into special wine dinners that I cater for people.”

Brendan Scholl, the wine buyer for Brix Restaurant in Oakville agrees: “I never have problems selling these wines. Some I reserve for our wine list, but we also have a retail store so some get sold there.”

Mark Pope, CEO of The Bounty Hunter, a wine store and search service in St. Helena, purchased 5 cases of Cabernet from Bond winery at an

uncontested bid of $30,000, and seemed perfectly content. “It’s the best wine I tasted today, and In the past I have been able to sell more 240 cases put together from stuff I got here at Premiere.”

It’s enough to make your checkbook hurt and to make that $30 bottle of Claret you’ve been saving for a special occasion seem like discount dishwater.

So are the wines really that good? Well, not enough for ME to justify the kind of money that these lots were fetching, but I have to say there were a bunch of really excellent wines amidst the 165 sold at the auction. I won’t bore you with my tasting notes from the entire list (which is over twice this long) and my fingers would fall off trying to enter all that information anyway, so here are the highlights.

Overall, a really impressive group of wines. Looking back at my list, 65 out of 165 wines I scored a 9 or above. Clearly these wineries all brought out some of their best stuff.

If you are interested in more details about these wines including where you might get your hands on some of them, please >check the Premiere Web site which provides the contact information for each winning bidder. While some, like Gary Fisch will have only a few wines that could be purchased by “walk-in” customers, there are others who I’m sure would be willing to sell you a bottle or three.