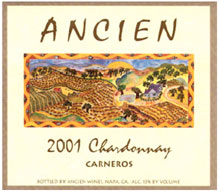 I presume that some of you have friends like mine who belong to the ABC club. That’s “Anything But Chardonnay” to the uninitiated, and what’s required for membership is an abiding love of White Burgundy and Chablis and the belief that there’s not a single Chardonnay made in California that can come close to the way that it is done in the “motherland.”

I’m constantly having conversations with friends like this and while I continue to maintain that they are wrong, I certainly don’t have a huge portfolio of wines that I can point to as examples which disprove their case. Sadly, much of California Chardonnay is made in the oaky, buttery style that these friends of mine love to hate, and much of it vastly exceeds in price a comparable wine from France, no matter what the exchange rate.

While some may quibble with its price (which isn’t extremely high), Ancien is certainly the best example of a California Chardonnay that hold its own with the crisp Chardonnays of France. I’ve had the wine now on two occasions and I continue to be impressed with its complex minerality and fabulous acidity.

Ancien Wines is a small family run outfit, staffed by the husband and wife team of Ken and Teresa Bernards who founded the label in 1992 after a couple of decades working on wines for other people like Domaine Chandon and Truchard. They are another example of one of my favorite types of wineries: the estateless label that seeks out great vineyard sources everywhere. Ken and Teresa have spent the last ten years sourcing Pinot Noir and Chardonnay all over Napa and Sonoma and now have a portfolio of several small vineyards that yield them what they feel is the perfect fruit to realize their passion for Burgundy varietals (a passion so strong that they actually make a wine every year from fruit in Morey-Saint-Denis, France).

The name Ancien, which means “the ancient one” is also a tribute to the deep roots of history and geology that mark the Bernards’ love affair with Burgundy.

This wine is made from fruit grown at the Toyon Ranch Vineyard from vines growing the selected cuttings that the Bernards have made from their favorite Chardonnay vines from all over Napa. This “super vine” project in the vineyard has been under development since 1997 and was used for the first time in this wine (along with some other fruit from Sangiacomo’s Wente Ranch Vineyard).

The grapes were gently pressed in whole clusters and then fermented entirely in French oak, of which only 45% was new. Native and non-native yeasts were used in the fermentation and the Burgundian barrels were specifically chosen to match the fruit. The wine was aged on its lees (the bits of sediment left after pressing) and these lees were stirred weekly for several months (to build richness in the wine) and the wine was not racked (poured off the sediments) until just before it was bottled. Interestingly, the secondary malolactic fermentation was only 70% complete before it was stopped.

700 cases of this wine were produced.

Tasting Notes:
Light green gold in the glass, this wine has a crisp nose of lemon zest, sun drenched wheat, and crushed stones. In the mouth it is layered with flavors of lemon curd, pineapple, orange zest, and chalk that are virtually levitated in the mouth by a zinging acidity that plays against the rich mouthfeel as the wine moves to a strong finish in the back of the mouth, ending with a light bitterness that is not disagreeable. Nothing California about this wine, except perhaps a touch more tropical fruit that some of its Burgundian brethren.

Food Pairing:
This is perhaps the only California Chardonnay I could recommend serving with oysters, but I think it would go even better with steamed mussels in a lemon saffron sauce.