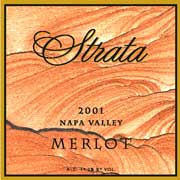 While it’s rare to find a winery dedicated to producing wines from a single varietal, it’s even more rare to find one that produces a single varietal that ISN’T Pinot Noir. For some reason that grape seems to inspire the cultish, obsessive compulsive instinct in winemakers like none other. How refreshing, then, to encounter the little known wines of Strata Vineyards.

Strata is one of those small projects that is becoming more and more common in the Napa valley: a labor of love by highly experienced, talented wine professionals who decided that retirement was boring and there’s nothing better than making wine with friends. To say that John Johnson and Dave Cofran are industry veterans is to somewhat understate the point. Johnson has been growing grapes in the Napa valley for over 25 years, and Cofran has been working for Napa wineries for more 35 years, 20 of which were spent as the general manager of Silver Oak Cellars.

Johnson and Cofran, friends for more than two decades, have actually been collaborating in the wine business since 1979, when they jointly purchased a 10 acre parcel in what is now the Oak Knoll District in the middle of the Napa Valley. 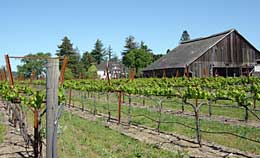 Under Johnson’s direction they have been producing grapes for the wine industry there ever since. In 1995 they purchased an adjoining parcel of land with the idea of starting a winery, and while Cofran wrapped up his tenure at Silver Oak, Johnson personally worked over the property and planted it with the Merlot grapes that are now Strata’s sole focus. When Cofran finally “retired” in 1999 they immediately embarked on the project they had been planning for years.

Strata Vineyards takes its name from the geologic concept of the same name, which refers to the layering of sedimentary rock slowly laid down over tens of millions of years. Today we can see strata in the colorful bands that adorn the walls of the Grand Canyon and Zion National Park, and of course, on the Strata Vineyards front label. For Johnson and Cofran, strata also represents the layers of friendship and respect for the land that they have collectively laid down over the years.

According to plan, Strata Vineyards produces a single wine, an estate grown 100% Merlot which is hand harvested and crushed by the Johnson and Cofran Family each year. After fermentation, the wine is aged in a combination of 50% French and 50% American oak for 24 months before bottling. Roughly 1200 cases are produced each year.

Tasting Notes:
This wine is a bright medium ruby color n the glass, and leaps out with a high toned nose filled with aromas of candied cherries, vanilla, tobacco, and light floral notes. In the mouth it is just as bright and surprisingly light on the tongue, with primary flavors of cherry and sweet oak, and nearly imperceptible tannins that taper to a surprisingly long finish which seems to barely avoid (but avoid it does) the heat of alcohol. I expected, and ultimately wanted, this wine to be a little more structured in the mouth, and less “pretty” than it is. Those who drink Merlot looking for a fruit forward experience will enjoy this wine.

Food Pairing:
I think this wine would be a lovely accompaniment to saltier darker fowl meat, like what you might find in this braised pheasant with red cabbage wild rice.