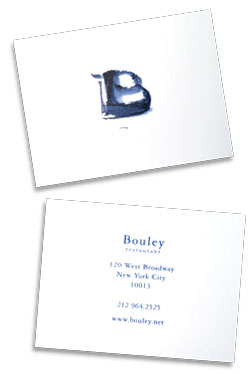 Good art is a dichotomy that merges the completely obvious and the utterly mysterious.

There used to be an artist on public TV named Bob Ross, who, until his death ten years ago, bared the inner workings of an oil painting to thousands of viewers per day. In just 26 minutes Bob would go from a blank canvas to a finished landscape painting showing you exactly how to do it: which paints, which brushes, and the technique for putting them together. If you’ve never seen this show, it’s hard to describe both the miraculousness of watching the painting take shape as bits of paint became trees and clouds, as well as the feeling of tranquil calm that accompanied the process. At the end you had not only learned and understood how to construct a painting but also had just soaked for a while in someone else’s creativity.

Eating in fine restaurants with any regularity and with any degree of careful attention exposes us to the techniques that go into crafting a delightful meal. This is not to say that most of us ever get to the point of being able to easily re-create a dish in our own kitchen or have the ability to wait tables at the finest establishments, but like the strokes of paint and the brush selections we learn from Bob Ross, eventually we begin to understand the mechanics of the fine dining experience.

The joy and the mystery for me remains however, that despite understanding how and why the elements of a restaurant conspire to create an meal, my experience is no less magical or satisfying, provided that everything is done with the proper care.

Walking through the door of 120 West Broadway, a building that looks like it was picked up by a tornado in Provence and dropped on the head of some unsuspecting city hall employee on her lunch break in Tribeca, you enter a foyer which is lined floor to ceiling with wooden racks filled with row after row of red delicious apples. My thought, when I first encountered these racks, was “Hmm… maybe the chef just really likes apples…” but then the soothing perfume-soft 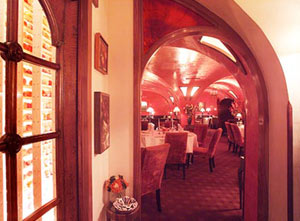 aroma of these jewel-like fruit hit me and I understood that this was merely the first obvious yet effective element of the the experience called Bouley.

Bouley is phoenix of a restaurant, the reincarnation of itself in a different place and time. Originally opened in 1987 elsewhere in Tribeca, it helped to set the bar for top-end dining in New York between 1991 and when it closed in 1996. The restaurant that now bears the same name, the same chef, and the same focus on excellence, opened in 2002 on the site of the Bouley Bakery, which was shut down after September 11th, 2001.

Once past the foyer the restaurant bifurcates into two pieces on either side of the bar, one which holds the main dining room, the other which holds a series of smaller rooms which can be reserved for private occasions of various sizes. The interior architecture of the main dining room is marked by classic gothic vaulted ceilings done in plaster and wood, with tasteful brown drapes, crimson carpets, an old plaster fireplace, subdued lighting, and eclectically upholstered chairs in shades of red. The “Red Room” as they call it, is tastefully decorated with antique mirrors and a gorgeous hand blown glass chandelier. The overall atmosphere is romantic and classical without being too dim to really enjoy the visual aspects of your meal or too distractingly ornate.

While the dinner menu offers a significant array of choices, the 5 or 6 course chef’s tasting menu is by far the best way to experience what the worldly-influenced French kitchen has to offer, and if you’re up for it, the variable (at least 8) course Chef’s Seasonal Degustation menu is apparently amazing.

My last visit there began with the typical encounter with the bread cart, which reminds me of a medieval torture device of some sort — all wood and pegs and wheels. After making a selection from the various homemade breads, we were served an amuse of shrimp fricassee with coconut gelee in a pink grapefruit broth topped with green apple foam. This small bowl of amazing essential flavors did exactly what an amuse bouche should do: snap the taste buds to attention, kick start the saliva glands, and set the stage for the meal to come. I entered the restaurant hungry, and I finished this dish ravenous, and tickled at the artifice of both continuing and at the same time transforming the aroma of apples that still lingered in my memory.

For my first choice I opted to get their version of what I refer to as a “tide pool in a bowl”: phyllo crusted Florida shrimp, Cape Cod baby squid, scuba dived sea scallop and Sweet Maryland crabmeat in an “ocean herbal broth.” This soup proved to be the polar opposite of a similar soup I had a few months ago. While that soup sparkled with the iodine salty crispness of marine air, this soup was sweet, like the taste of fresh water after scuba diving all day. The herbs and the crabmeat made a slightly pungent sweet base flavor that each of the impeccably fresh seafood flavors could use as a foil.

The soup was followed by a good sized Nova Scotia halibut steak with parsley root and first-of-the-season Oregon truffles over a white truffle froth. I find that a lot of restaurants overcook halibut, but of course I had nothing to worry about here as the fish flaked into beautiful segments at the touch of the fork and dissolved into a surprising flavor in the mouth. I was taken aback at how well the truffle/halibut combination worked in this dish. Regular readers will know that I’m not horribly enthusiastic about truffles (certainly less so than most fine diners) which may explain why I thought this was an excellent, but not stupendous dish.

My final main course was wild South Carolina squab and foie gras wrapped in organic Savoy cabbage accompanied by a stuffed squab leg over artichoke purée and pearl onions braised in red wine. If that sounds a little too complicated to you, that’s just how it tasted. Lovely flavors all, but just not nested in quite the right way to achieve a sublime combination. I found myself eating each of the components separately, and wishing for something a bit more simple.

Any disappointment (not much) that remained from my squab was quickly erased by one of the loveliest palate cleansers I have had in a long while, a fresh chilled rhubarb soup with Fourme d’Ambert ice cream and Beaujolais granité. Holy cow, was this amazing! The idea of a blue cheese ice cream is bizarre on its face, but I can’t tell you how perfectly it counterpointed the tart fruitiness of the soup and the granité. The acid of the fruit cut to the heart of the musty cream without overpowering it and vice versa. This was truly a perfect dish in its idea and execution.

We finished the evening with a trio of desserts: a hot Valrhona chocolate soufflé with Vermont maple and vanilla ice cream, and chocolate sorbet, which was mostly ordinary; a strawberry mousse “cloud” over raspberries with rose petal ice cream, of which the ice cream was the best part; and fresh strawberries, white chocolate mousse, strawberry granite and yogurt cream which was my favorite of the three — pure in its flavors, light but satisfying.

The food, as hopefully I have conveyed, is excellent. This is not high concept food that has a strong intellectual component to it. You’ll find no gustatory puns here. While there will be occasional surprising combinations of flavors like my halibut and truffle, or elegant, event transcendent moments like the Fourme d’Ambert and rhubarb, what Bouley seems to do best is solid, soulful French cuisine with dabs of Mediterranean and Asian influences. Wizardry it is not, but wonderful? Yes.

During the meal described above I opted for the accompanying wine flight ($70 extra) and while it was generously applied, with several options for me to choose from at each course, I felt like it was the weakest aspect of the meal. Certainly several of the wine that were served were very good, but the pairings were a bit off for my taste. My recommendation is to stick with the bottle or half bottle selection from the wine list, which is extensive and excellent, or bring your own. Bouley’s corkage fee is $40.

While I don’t have the perspective to be able to compare Bouley to its former self, it’s hard to imagine that it could have risen from the ashes any stronger as a restaurant. David Bouley is a chef who seems focused on the sensual pleasure of food. This is definitely culinary excellence at its most beguiling: honest, straightforward, and deceptive in its seeming effortlessness — like the scent of fresh apples that you carry with you out the door into the night.

Reservations strongly recommended. The restaurant has a stated dress code of business casual but in my experience the crowd tends toward the formal end of the spectrum (men will probably feel more comfortable in a jacket).

Closest Subway Stop: Chambers Street Station on the 1,2,3 lines and the A,C,E lines.