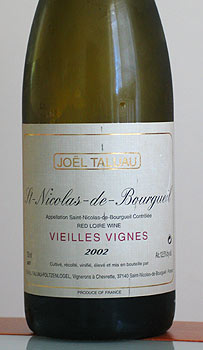 I’m sure I’m going to end up on some Homeland Security watch list, or at least on the Republican National Committee blacklist for this but who cares. I’m reviewing a French wine on Independence Day. Consider it an homage to the philosophical underpinnings of our own revolution, a tip-of-the-hat to the ideological impetus behind our eventual independence.

In a further obfuscatory and untraditional manner, I’ve reviewing a Loire wine, but not one of the famous Sauvignon Blanc based wines of the region. Instead I’m reviewing this lovely Cabernet Franc based wine from Saint-Nicolas-de-Bourgueil, a small appellation smack-dab in the middle of the Loire Valley.

True Francophiles will show no surprise at a red wine from the Loire, knowing that in fact the valley and it’s appellations have the highest diversity of vine varieties anywhere in France. The Loire grows, among other things: Sauvignon Blanc, Chenin Blanc, Cabernet Sauvignon, Cabernet Franc, Gamay, Malbec, Meunier, Pinot Gris, Chardonnay, and Pinot Noir. Additionally this region plays host to the largest number of hybrid varieties in France.

Saint-Nicolas-de-Bourgueil is an 1800-or-so acre appellation on the north bank of the Loire, just to the west of the larger and more well known Bourgueil region. It’s wines are exclusively made from the Cabernet Franc varietal and are quite unknown in the states.

Joel Taluau has had an estate in the region longer than almost any other, making him one of the forefathers of the appellation. Taluau has about 50 acres of vines in the light soil of the region, divided into recently planted young vines and a section of old vines planted in 1934. It is these older vines that are responsible for this wine. “Just like man, the vine does stupid things up to the age of 20, from 20 to 40 it gets wiser and after that it’s a question of philosophy,” says Taluau, who now receives help from his son-in-law Foltzenlogel in running the estate.

Despite Taluau’s advancing age, things continue to be run at the winery according to his prescription of winemaking, which amazingly involves no oak. The wines are fermented in steel and bottled directly, in the case of the young vines, or after a period of resting for the old vines. No filtering is done of any kind, and fining is done only with egg whites.

One of the most astonishing things about this wine is the low alcohol level (12.5%) despite the wine having very distinct and pleasurable fruit flavors — further proof that high alcohol levels are not required to get round fruit flavors from a red wine.

Tasting Notes:
A medium garnet in the glass this wine has the nuttiest nose I’ve ever perceived on a red wine, with loads of crushed almonds, hazelnuts and macadamia nuts overlaying aromas of dried cranberry and figs. In the mouth it posesses light, juicy flavors of raspberries, redcurrant, rosehips, and continues to incorporate notes of almond. The wine has a nice acidity and very light, nearly imperceptible tannins that stretch into an incredibly long finish, despite the wines lightness and relative simplicity. One of the lightest, yet most distinctive Cabernet Franc’s I have ever had.

Food Pairing:
This is a delicate wine that could easily be overwhelmed with strong flavors. I’d suggest matching it with something like this gorgeous heirloom tomato tart.

This wine is available for purchase over the Internet. Be sure you’re buying the “Vieilles Vignes.”