The more Nero d’Avola I have, the more I like it. This earthy old world varietal, native to the island of Sicily, seems to produce wines that are capable of calling one back to an earlier time and atmosphere, filtered with afternoon sunlight and redolent with the smells of fresh coffee, dirt from the fields, and someone’s mother’s cooking from down the cobblestone streets.

True connoisseurs of the varietal will tell you it’s pretty hard to get wines that really do that, as they are made by small families in small quantities, even smaller bits of which seem to make it to the United States. However, there are a number of larger family producers that, while not meeting the criteria of miniscule production levels required by collectors, manage to produce wines that are enjoyable, even excellent, and are certainly evocative of the same feelings.

The Morgante family owns 500 acres of vineyards and almond groves that sweep along a series of hills about 45 miles from the famous valley of Agrigento, the site of Sicily’s major World Heritage archaeological sites. Sitting between 1,150 and 1,800 feet above sea level, these vineyards are almost exclusively planted with native varietals which bask in the Mediterranean sun during the day, and are cooled by breezes at night.

The family has been growing Nero d’Avola for five generations, but it was only in 1994 that Antonio Morgante, encouraged by his sons, decided to make his own commercial wines. In 1997 they were joined by winemaker Riccardo Cotarella, who has helped craft the family’s wines 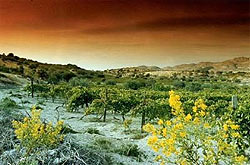 to their current level of acclaim and popularity. Every aspect of the winemaking process continues to be overseen by family members.

Made from 100% Nero d’Avola, this wine undergoes primary fermentation in steel tanks, with no secondary fermentation, and is aged in 100% French oak before being fined with egg whites and filtered before bottling. It ages for three to four more months in the bottle before release. 15,000 cases made. The 2003 is the fifth vintage of this wine, which has been winning awards internationally since its first vintage.

Tasting Notes:
Medium ruby in the glass, this wine has a delicious nose of stewed prunes, cherries, leather and vanilla. In the mouth it is reasonably well balanced with flavors of leather black tea, cherries, and damp earth. Very light, almost imperceptible tannins carry the wine to a medium finish that has hints of pine sap.

This wine is readily available for purchase on the Internet.