With all the fuss and focus these days on single vineyard wines, it’s both funny and appropriate to find someone swinging the other way. Though I’m sure Ambullneo Vineyards proprietors Greg Linn and Scott Ames are deeply serious. Linn has decided to build a winery based on creating blends of some of the state’s top fruit purchased in small quantities from select vineyards. Says Linn on their web site, “Not being at the mercy of single vineyards enhances the quality of every vintage. Yes, great vineyards can make great wines. But adeptly blending several great vineyards creates unique wines of exceptional character. What if Burgundy could blend La Tache, Musigny and Chambertin? Just imagine the results.”

It’s fitting that Linn mentions some of the top Burgundy producers in his little thought experiment, because Ambullneo certainly seems to be angling for the upper end of the market. From the heavy, heavy glass bottles to the price tags in the $40 to $70 range, this is an operation that has a vision for who they want to be, and they seem to be succeeding with placements in many of the top restaurants in the Bay Area, including The French Laundry, Gary Danko, Rubicon, Michael Mina, etc.

I should say, by the way, that the Central Coast designation I’ve given the winery above is inaccurate. Technically, this is an estate-less winery which owns no vineyards and crushes their grapes using a shared facility at Au Bon Climat which happens to be in the Central Coast appellation. However, the winery makes wine from grapes grown both on the Central coast as well as the Russian River Valley and other appellations as well. 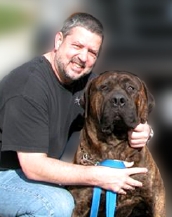 Another thing worth explaining is the name of the winery, which is actually named after a new type of dog, that not coincidentally is a part of the owner’s family. Ambullneo, which is a concatenation of AM-erican BULL-dog breeds NEO-politan Mastiff, is in fact a new, and quite pretty combination of those two breeds. Though pretty isn’t quite the word you’d want to use to describe these dogs, which as you can see from the picture of Greg and Rockne there on the left, are more towards the “huge” end of the spectrum.

The current releases for Ambullneo, which I believe is only their second vintage, consist of just the single Pinot and Chardonnay below. In 2004 these wines will be joined by two more Pinot Noirs and a Syrah. They’ve already hit the radar for restaurants, obviously, as well as Parker and PinotFile, so I can’t file them under “undiscovered” wines, but this is a small operation to watch if you’re interested in the upper end of Burgundy-style producers in California.

2003 Ambullneo Vineyards “The Big Paw” Chardonnay, Central Coast, CA
Light yellow gold with highlights of brown in the glass, this wine has a perfumed nose of pineapple, apricots and sultanas. In the mouth it is overflowing with pineapple flavors and other tropical fruits, plus lemon zest, and a hint of buttercream and minerality. It’s extremely silky on the palate with a high glycerin content, but with not quite enough acid for my taste, leaving it just slightly flabby, though it has a long finish. Score: 8.5/9. Cost: $40. Where to buy?

2003 Ambullneo Vineyards “Bulldog Reserve” Pinot Noir, Santa Maria Valley, CA
A medium to dark garnet in color, this wine has a classic cool climate Pinot nose of cranberry, pomegranate, and sandalwood. In the mouth it is mellow and soft, with great acidity and flavors of crushed herbs, cranberries, raspberries, and cherries, that taper to a moderate finish. It hangs somewhere between a true Burgundy style wine, and a more fruit forward California style, never quite becoming either. The fruit for this wine comes from: 80% Solomon Hills, 10% Laetitia, and 10% Dierburg. The winemakers suggest significant decanting of this wine, even over a couple of days, to allow it to open up. I had mine right out of the bottle, however. Score: 9. Cost: $65. Where to buy?