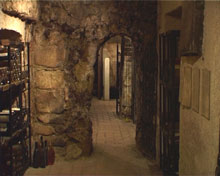 When Michael Wenzel says his family is in the wine business, he means it. Every bottle that comes out of his small operation in the (perhaps aptly named) town of Rust where his family cellars are is stamped with the phrase: “since 1647.” But that doesn’t quite begin to tell the history of this family’s relationship with wine in a single spot for over 500 years. Some of the things that might are the stone wall that still stands which was erected to keep out the Turks; or the 100+ year old wooden wine press which was just put out of commission 4 years ago, and will be the first one in centuries that won’t be replaced by a model just like it; or maybe the holes in the walls of the cellar that Michael’s grandfather dug to hide wine from the invading Russians during World War II.

Wenzel Winery, like the tiny Freistadt of “Free town” of Rust where it is located, owes its freedom and its history to wine. The town was able to buy its independence from the semi-feudal system at the time by paying the noble house of Esterhazy 60,000 Guldens of gold and 500 eimer (roughly 30,000 liters) of their best wine in 1681. Even earlier than that (roughly since 1524) the Rusters have had the right to burn an “R” into their barrels, which still serves as the brand mark for the Ruster wines and wineries and is one of the oldest trademarks in the world.

The Wenzel family has lived in this small town of Renaissance church spires and storks nesting on rooftops as far back as anyone can remember (or can read). Their 500 year old wine cellar still houses their wine and the occasional curious visitor to this section of the Burgenland, the second largest of Austria’s 4 major wine regions. The town of Rust falls in the Neusiedlersee appellation, which is one of the smaller subdivisions of the Burgenland.

The Wenzel winery continues to produce small quantities of wines just as it has for hundreds of years, and one in particular has made it and this region world famous. Known as Ruster Ausbruch, or just Ausbruch, this sweet dessert wine, made with botrytized grapes (the same “Noble Rot” that brings the world Sauternes) has been sought after for centuries. Wenzel continues to make it according to the original recipe, which is a mixture of both the Furmint and the Gelber Muskateller varietals. Gelber Muskateller is the German name for Muscat Blanc, a contender for the oldest known wine grape varietal, while Furmint is the famous ingredient in Hungary’s Tokay wines. Most contemporary Ausbruch producers have left out the Furmint from their current productions.

Wenzel’s family have long claimed that Ausbruch wines will keep for literally hundreds of years, but sadly they can’t prove it. Every bottle older than 1946 was drunk by the occupying Russian army, who managed to find them despite Michael’s grandfather’s efforts to hide them.

I recently had the chance to taste through four of Wenzel’s current releases.

2001 Weinbau Wenzel Pinot Gris, Rust (Burgenland), Austria
A light straw gold color in the glass, this wine has a lovely nose of ripe golden apples, honey, dry grass, and a hint of apricots. In the mouth it is supple and smooth with a slight sweetness from a bit of residual sugar and primary flavors of honey and orange zest which taper to an unfortunately slightly hot finish. Not horribly complex, but better than a lot of one dimensional American Pinot Gris. I have a hard time warming to this varietal when done in an off-dry style, however. 66% of this wine sees barrel fermentation in large oak casks, while 33% is fermented in steel. Score: 8/8.5. Cost: $19.

2001 Weinbau Wenzel “Bandkraeften” Blaufrankisch, Rust (Burgenland), Austria
A medium ruby color in the glass, this wine has a nose of plums, cedar, and light camphorwood scents. In the mouth it is light to medium bodied with a nice acid balance and persistent tannins. The primary flavors are earthy and woody, with soft plum and redcurrant fruit tinged with a pleasant bitterness and a moderate finish. Honestly, this is the first bottle of Blaufrankisch that I would actually consider finishing. It’s a wine with real personality and very pleasant. It is aged for 18 months in small oak barrels, 30% of which are new. Score: 8.5/9. Cost: $25.

2002 Weinbau Wenzel Riesling Beerenauslese, Rust (Burgenland), Austria
A light yellow gold in the glass this wine has a heady tropical nose of melon, honey, and orange blossoms. In the mouth it is thick and viscous with primary flavors of honey, nasturtiums, and just a hint of those honey roasted peanuts you get on airplanes. On the sweetness scale, this late harvest wine is about a 9 out of 10. Score: 9. Cost: $36.

2001 Weinbau Wenzel “Saz” Ruster Ausbruch, Rust (Burgenland), Austria
A strong orange gold in color, approaching amber, this wine has a complex perfumed nose of apricot nectar, fresh baked pastries, sweet cream, and honeysuckle. In the mouth it is one of the thickest, most voluminous wines I have ever felt slide across my tongue. It is nearly chunky in its viscosity, pushing back against the inside of my mouth with flavors of candied orange, honey, dried mangoes, and mixed flowers. It has a very, very long finish. Made from 60% Furmint and 40% Gelber Muskateller. Score: 9.5/10. Cost: $88.

Wenzel wines are are available for purchase on the Internet.