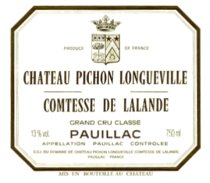 There’s something remarkable about the generosity of wine lovers and collectors. Their willingness to share a bottle, even the most expensive bottle that they have cared for and stored sometimes for decades, often with complete strangers never ceases to fill me with wonder, admiration, and pride. I have the same tendency. We’re good folk, us wine lovers. Even the biggest snobs I’ve met, ones that I can barely stand to be in a room with are perfectly willing, and even excited to pop open a dusty bottle and share it with people they know will appreciate it.

I got invited, through a friend, to a nice dinner the other night at the house of some folks I didn’t know. It was a small dinner party, just 5 couples, but I knew only my friend and her husband. When we got a handmade invite in the mail and the request to bring a special bottle of wine, I knew we were in for a treat. The hosts also happened to mention they were breaking out a bottle of their 1966 Lafite-Rothschild.

The dinner was fantastic, and the company lovely, though people seemed to want to talk a lot about my blog and started asking my opinion on all sorts of things wine, and to be honest I got a little embarrassed.

The 66 Lafite was great, definitely in good shape for its age (older than me!) but the star of the night for me was this Pichon-Lalande (the more common truncated name for the wine which is just a bit too much of a mouthful to insert into normal conversation). The wine is also sometimes known as Pichon-Comtesse. Both of these truncations are for brevity, but also to distinguish the wine from Pichon-Longueville Baron (aka Pichon-Longueville, but formerly Pichon-Baron — confused yet?), which is the other half of the estate. Pichon-Longueville was a single property when it was ranked as a second growth during the famous 1855 classification, but was split up in subsequent years, apparently as part of an inheritance battle. One half of the estate went to a Baron, and the other half, to his sister the Comtesse, and in a remarkable and probably careful and deliberate turn of events, Pichon Lalande has been run by women ever since.

Pichon Lalande is in the Pauillac region of Bordeaux, on the left (west) bank of the Gironde river estuary and is one of the northernmost appellations of the Medoc region of Bordeaux (just south of St.-Estephe which is the northernmost, and farthest downstream on the Gironde, which runs north/northwest at this point). Pauillac is a small appellation, but has the unusual distinction of hosting three 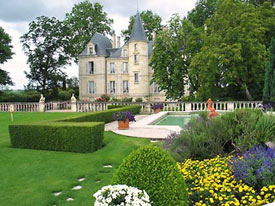 of the five ranked First Growths (Lafite, Latour, and Mouton-Rothschild) according to the aforementioned 1855 classification.

Pichon Lalande sits at the southern end of the Pauillac, where the well draining gravelly soils play host to some of the best Cabernet Sauvignon growing conditions in the world. My fellow blogger Bertrand of Wine Terroirs just visited Pichon-Lalande, and has some gorgeous photos of their operation, including the lovely one over there on the left of the chateau and gardens that I stole from his site (hope he doesn’t mind).

The winery currently has about 180 acres of vines under cultivation mixed with about the same varietal proportions as their wine: 45% Cabernet-Sauvignon, 35% Merlot, 12% Cabernet Franc, and 8% Petit Verdot. After harvest, the wine is sorted into small varietal lots and crushed and fermented separately in large steel and occasionally cement vats. It is then partially blended and aged in various French Oak barrels for 18 months, after which the final blend is made and the wine is bottled.

1985 was the coldest winter in nearly 100 years with lots of snow in the region, and a very cold and rainy spring that pushed into June. Once into July, temperatures increased dramatically and the grapes apparently developed well, through August which was somewhat overcast. Harvest took place in September under perfect (very dry and very hot) conditions. The year is generally thought to have been a good one, and according to both the Chateau and various critics, this wine is at its peak of drinkability.

Tasting Notes:
A medium ruby color in the glass with very little hints of aging in the color, this wine has a meaty, sausagy nose with aromas of cherry, wet blackboard, and tobacco. In the mouth it still has a lovely acid backbone and lush flavors of cherry, redcurrant, as well as a nice minerality. The mouthfeel is gorgeous and some peachfuzz-soft tannins are still in evidence. The wine finishes with some notes of tobacco, and just goes on, and on, and on.

Food Pairing:
This wine would be a lovely accompaniment to a beef tenderloin with roasted shallots, bacon, and port.

This wine is readily available on the Internet.