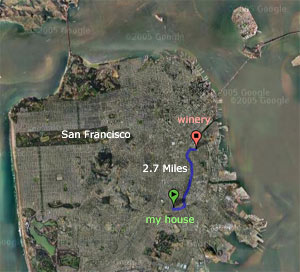 This wine review is my entry in this month’s Wine Blogging Wednesday, hosted by it’s pioneer, Lenn Thompson over at Lenndevours. The theme guiding dozens of wine and food bloggers this month is “Drink Local. Real Local.” Lenn has challenged us all to taste and review a wine from the winery closest to our own home.

For me, that was a pretty simple proposition:

What is a Napa winery doing smack dab in the middle of San Francisco? It’s sitting across the street from its other half, The Anchor Steam Brewing Company.

Fritz Maytag has owned a vineyard on Spring Mountain about as long as he has owned the Anchor Steam Brewing company here in San Francisco. Yet until 6 or 7 years ago, he never sold his own wine from it.

“I’ve often said it’s like St. Augustine who used to pray to God to give him chastity, ‘but not yet.'” said Maytag in an interview with the Chronicle. “And I used to say ‘I’m going to have a winery, but not yet.”

Apparently, though, the time has come for this brewing pioneer to move into the wine business.

Maytag is the prodigal son of the Maytag family who decided that he needed to do something instead of appliances with his life. Not that his family ever had any intention of just letting him run the family business. Maytag was encouraged to find his own way in the world

without a sense of entitlement. That way included a stint at Stanford as well as a lot of hanging around in the North Beach neighborhood of San Francisco, until the day in 1965 when he fell in love with the Anchor Brewing Company, and decided to save it from going out of business by buying a controlling interest “for the price of a used car.”

Maytag took to brewing like a fish to water, and in the subsequent decades, he has become the Midas of the beverage world. His beer is world-renown and best-selling; his experiments in whiskey and gin have become quick successes. Maytag is a dabbler, a beverage renaissance man if you like, that seems to get it right. From home grown olive oil, to home grown apple brandy, to grappa and port, and now his own wine, Maytag wouldn’t have seemed out of place in the turn of the century village market where farmers eked out an existence from every asset the land provided.

The Maytag property on Spring Mountain is 125 acres of vineyards surrounded by another 575 acres of woods and orchards, hosting 24 varieties of native trees whose silhouettes make an appearance on the York Creek wine label. As one might expect from Maytag, the vineyards are planted with all sorts of interesting things — 14 varietals including Cabernet Sauvignon, Petite Sirah, Zinfandel, Petit Verdot, Cabernet Franc, Pinot Blanc, Carignane and Alicante Bouschet.

Maytag initially started his winemaking operations in the early Nineties for fun and with the encouragement of his neighbor and friend Cathy Corison, owner and proprietress of Corison Vineyards. In 2000 he moved his operations to a specially designed (by him, of course) winery building across the street from his brewery. There he continues to serve as winemaker, though now with some help from Tom Holmes, formerly one of the brewers at Anchor Steam.

This particular wine is labeled as both Cabernet and Meritage. Its proportion of varietals (80% Cabernet Sauvignon, 11% Merlot, 7% Cabernet Franc, and 2% Petit Verdot) technically allows it to be labeled as Cabernet in California, but Maytag likes the term Meritage, as the wine leans towards European in style, while remaining distinctly Californian. The wine is aged in mostly French oak, with a little of American thrown in for variety. 743 cases are produced.

Tasting Notes:
A medium ruby color in the glass, this wine has a soft nose of cherry, cedar, violets, and very light anise aromas. In the mouth it is soft, with imperceptible tannins and a nice velvety mouthfeel. The smooth, primary flavors are cherries, chocolate and cola, shifting to a slight herbaceousness on the moderately long finish.

Food Pairing:
I’d love to drink this wine with a flank steak salad with roasted shallots and goat cheese.