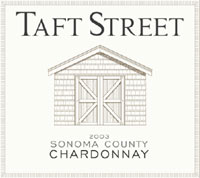 The term garagiste entered the wine lexicon about 10 or 15 years ago, mostly because of some enterprising small producers in Bordeaux who were bucking the tradition and winemaking styles of the large established Chateaux. Since these winemakers rose to prominence, with a little help from Robert Parker, the term has gone from an originally derogatory or at least disdainful label to one that is useful for describing all manner of small winemakers around the world, some of whom actually do make wine in their garages.

While certainly not the first to make wine in a garage John and Mike Tierney might be credited with helping to “perfect the art form” in California as it were. Originally known as the Taft Street Garage Winery, what is now a thriving family winemaking business in Forestville, California, started as two student brothers experimenting in their garage in between classes and research at UC Berkeley. Inspired by a local business that helped home winemakers source grapes, John and Mike and a few friends gradually got more and more serious, to the point at which, in the late 1970’s they were producing about 1000 gallons of wine each year with a loyal following of both wine drinkers as well as volunteer workers.

The winery eventually became so popular that an irate neighbor turned them in to the Bureau of Alcohol Tobacco and Firearms in an attempt to get them arrested for illegally liquor manufacturing. The participation of several families in the winemaking process helped the brothers skirt around the regulatory limit of 200 gallons per year per family, but the winery had reached a crucial point and the Tierney brothers were faced with a choice. Without quite knowing what they were getting into, but knowing that they loved what they were doing, the brothers moved the operation to Forestville, dropped the “Garage” from their name, and never looked back.

Today, 24 years later, Mike Tierney and Mike Martini (who was one of the co-founders of the winery back in the Seventies) still manage Taft Street Winery. They produce a large portfolio of wines from Sonoma County including Sauvignon Blanc, Merlot, Pinot Noir, Cabernet Sauvignon, Zinfandel, as well as this Chardonnay.

This wine is a blend of two undisclosed vineyards in the Russian River Valley appellation. It was partially barrel fermented and partially steel tank fermented, and only a portion of the wine went through secondary, malolactic fermentation. After fermentation the wine was aged in oak (66% French, 34% American) for six months before bottling. 2256 cases made.

Tasting Notes:
A medium gold color in the glass, this wine has a soothing nose of buttercream, lemons, and Nivea (or cold cream). In the mouth it has a nice balance with good acid and primary flavors of lemon zest, minerals, a bit of melon, and a bit of butterscotch. The wine is not too creamy, nor too oaky, and finishes nicely. If this is the direction that California Chardonnay is heading in the 21st century, I’m going to be drinking a lot more of it.

Food Pairing:
This is a nice all around food wine thanks to the restraint on the secondary fermentation, and would pair nicely with grilled calamari with arugula.

This wine is available for sale online.