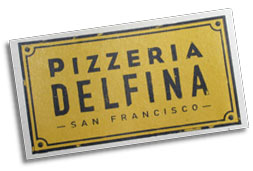 What is it with pizza anyway? Short of sushi and steaks, I don’t know any other foodstuff that inspires so much fervor of specificity among people who love to eat. And I’m not talking about pies from your local delivery service, however good they may be. What really sends people into paroxysms and polemics of culinary criticism are proper thin-crust pizzas that are increasingly finding their way onto menus of all types, from the casual bistro to the chic upper-end restaurants all over the city. Everyone has their own opinion of where the best pizza can be found, and what characteristics make for the ideal pizza (leaving aside for a moment the fundamental divide that exists between the thin crusters and deep-dishers). The next time pizza comes up in conversation with people who like to eat, just watch for the superlatives that get rolled out like so much dough.

Credit must be given to several restaurateurs in the Bay Area for either having their ears to the ground on this growing appreciation for meals-in-the-round, or perhaps for starting the trend in the first place. In any case, San Francisco is undergoing a pizza Renaissance of sorts, with several new restaurants popping up in the last 6 to 9 months that have pizza as their singular focus or at least a major part of their offering. To the list of recently opened Zuppa, A16, Pizzaiolo, and Pico Pizzeria, now we can add Pizzeria Delfina.

Delfina, of course, is the hugely popular Tuscan-influenced trattoria in the Mission, which remains in my opinion, one of the most underrated restaurants in all San Francisco (I supposed I should write a review one of these days, but I’d rather spend the hour or two standing out front waiting for a table). So when news broke a while back that they were opening up a pizzeria next door, I got pretty excited, and when the doors opened a couple of weeks ago, Ruth and I simply had to go down and check it out immediately.

Pizzeria Delfina occupies a narrow space just beside its parent restaurant. It would be all too easy to miss but for the few shiny metal bistro tables that are closely spaced in front of the restaurant’s large main glass window. These tables are crucial to the restaurant’s capacity as they pretty much double (OK, not quite) the available seats of the restaurant, making me wonder what will happen when the weather turns cold and rainy here in a couple of months. I didn’t notice heat lamps or an awning in place to fend off the coming winter.

From November to March, in the absence of such protections, presumably everyone will pack into the small interior space, which provides counter seating along the front of the miniscule kitchen for about 12 people, and then into the four or five available small tables in the front of the space. Despite its diminutive size, the restaurant has a nice feel to it. Bright white tiles run along the floors and up onto the walls, and the counter fronts the industrial, stainless steel impressiveness of the kitchen and its ovens. There’s no sense anywhere that you’re here for an “experience,” because this place is only about one thing: food. In case that wasn’t obvious from the furious workings of the pizzaiolos in front of the ovens and the constant stream of full plates going over the pass and empty ones coming back, you’ll likely walk by working pastry racks of freshly roasted tomatoes and oven dried oregano on your way to use the one bathroom at the back of the restaurant.

Most probably you’ll stand for a while under a blackboard just inside the entrance where you’ve written your name and party size to wait for a table. While you do, you can gaze across and above the blurred forms of the speeding waitstaff to the large blackboard which dominates the east wall of the restaurant and which advertises the components of the exceedingly simple menu. Did I mention this restaurant was only about one thing? For the main event, you choose from one of 5 pizzas (Neopoletana, Margherita, Salsiccia, Clam Pie, and Quattro Formaggi) or a broccoli rabe calzone or whichever of their single daily specials is on offer that day, which might be lasagna or meatballs or mussels with garlic and peperocini. Note with seriousness the way the waitstaff tell you that you can’t make additions or substitutions on the pizzas with the exception of adding anchovies or pepperoni. These people aren’t kidding around. They will, of course, accommodate any food allergies by removing ingredients within reason.

While you wait the 15 or 20 minutes for your pizzas to be made (oh yes, you’ll want more than one) you have the option of snacking on a few bits of antipasti. The always-on-the-menu insalata tricolore, an arugula, radicchio, and endive salad dressed with lemon, olive oil and shaved grana cheese is a bright, zingy dish with fresh contrasting flavors. If you’re a cheese fan, you won’t want to miss the fresh-stretched mozzarella, which is fabulous. The rest of the antipasti offerings change on a daily basis and range from marinated beet salads with fresh ricotta cheese, to eggplant caponata, to fried calamari with zucchini.

Of course, while you wait, you’ll also want some wine. The list here is short and serious, like the pizza. Only Italian wines of course: 1 sparkling, 7 whites, and 13 reds by the bottle, with about half as many poured by the glass. Prices for bottles range from $15 to $45 and glasses fall somewhere between $6 and $11. Campania dominates the list but there are also selections from Sicily, Tuscany, and Basilicata. I’m also willing to bet that if you ask nicely you might be able to order from the main restaurant’s list should you have a penchant for something special. Shockingly, their corkage policy is “do not cork,” meaning you’ve got no choice but to order from their list. I was appalled when I heard this, to the point of wondering whether it’s some sort of licensing issue. If not, I hope it’s something that the owners correct very quickly, along with the fact that the servers seem to cross the line from informative to pushy when it comes to suggesting you enjoy some wine with your food.

After a bit of time to tuck into your antipasti, your pizzas arrive. And now is when I get to step up on the soap box and tell you what I think makes for fabulous thin crust pizza.

Like rhythm and blues, like sand and sea, like sun and clouds, the toppings of a pizza work at once independently and in conjunction with the dough to provide a set of fresh and intense flavors supported by a backbone of crust. Pizza is ultimately about the collision between flavor and texture. So what does this mean for the way pizza should be evaluated? First the dough should be crisp and should crunch slightly when you eat it. Not with the sharp crack of matzo or thick tortilla chips, but with the a softer but distinct crunch of toast. The dough should not be overly bitter or salty, and it should have enough sweetness and spongy moisture underneath the crisp crust so that it’s possible (and desirable) to eat the crust without the topping, and without needing to immediately have a glass of water.

The toppings of an ideal pizza should taste barely cooked. You should taste fresh tomatoes and basil; the salty tang of anchovies should evoke clean seawater; and meats should be firm and juicy and bursting with flavor. The toppings should be spare (too much of anything, and then everything can be overwhelming, and in particular, there shouldn’t be too much cheese, which even in slight overages can turn a pizza into a rubbery mess).

In short, the thin crust pizza should taste much bigger than it is. It should go down quick and hot, but in every bite it should seem impossible that the flavorful experience of eating it should come from simple bread and vegetables and cheese the thickness of a few sheets of paper.

So how does Pizzeria Delfina match up to this ideal? Remarkably well. They seem to be serving up pizza that is head and shoulders above most in the city, and quite possibly better than all. The only thing I can complain about, really, are minor details. For instance, it would be great if the kitchen would please put more than TWO leaves of basil on the Margherita pizza. The food, both the pizzas and the antipasti, hit a sweet spot between casual and gourmet that seems to be synonymous with the Delfina name. They’ve even got nice little touches like a small dish of fresh hand grated parmesan, a bit of the oven dried oregano, and roughly crushed red peppers for you to pinch and sprinkle. I’d love to be able to sit with a Pizzetta, a Pizzaiolo, and a Delfina pizza side by side, to make the final call, but for now I’m content to just rotate through the three of these spots to the exclusion of everyone else. Given that Delfina is a few minutes from my home, I’ll probably end up there by default.

The desserts on offer change frequently, but tend to express the same freshness embodied in the preparations of your meal. When I was there last they included a cannoli and an apricot crostata, along with some biscotti if you felt like finishing your meal with an espresso. Also, if you’ve got a hankering for something sweeter, you can always stroll next door to Tartine.

The service at Pizzeria Delfina is what you might expect from a tiny, bustling bistro that way too many people want to eat at during prime time. Things are rushed, or more frequently a little delayed, but good natured all the same, and certainly with an eye towards what makes for good restaurant service, though without the pace required to deliver it. Like most bistros, and certainly any pizza restaurant I’ve ever been to, you don’t go for the service or anything outside of what gets set on the plate in front of you in due time. And by that standard, Pizzeria Delfina is clearly fantastic.

Closed on Mondays until 5:30 PM, otherwise offering continuous service from noonish to 10:00 PM, and ’til 11:00 PM on Fridays and Saturdays.

No reservations accepted, service is on a first-come, first-serve basis.

Parking in the neighborhood can range from difficult to impossible depending on the hour of the day and the day of the week.