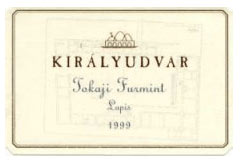 Let me get down on my knees and pray to the gods of wine drinking. “Please, oh gods who bestow blessings upon those who call themselves wine drinkers, let me continue to be surprised and delighted by random wines that I stumble across in my life. I don’t need to taste the vintage of the century, and I probably can’t afford it, but I really want to still be finding out about wines like this when I’m eighty-five.”

Of course, this is where the fantasy of being a sommelier comes along. Imagine spending your days actually hunting down these wines. What a life. I have a nameless sommelier to thank for this one, an alternative presented as I waded through a list of Alsatian wines looking for something that would go well with the fish dishes that were on their way to the table.

This 500ml of personality in a bottle is made by the Királyudvar Tokaj Wine Company, Ltd. a recent (1997) joint venture between Anthony Hwang of the A&E Group (an Asian based conglomerate), and winemaker István Szepsy, one of the most famous winemakers in Hungary (his family has been making wine in the region since 1600). Together they purchased and renovated an old winery and its surrounding vineyards in the heart of the Tokaj region of Hungary. Királyudvar, which means “imperial courtyard,” was not just any old winery, apparently, but was the primary press house for the wines of the royal Hungarian court. Located in the village of Tarcal in northern Hungary, the estate sits in the middle of some of the regions most prestigious vineyards. Apparently all but three of the estates vineyards are in the “first class” according to two historical surveys which attempted to classify vineyards much in the same way as the First Growths of France.

The nearly 300 acres of vineyards are planted with an amazing array of unpronounceable and unrecognizable varietals including Ezerjo, Mezesfeher, Dinka, Kadarka, and Hárslevelu, along with Furmint which has traditionally made up the majority of Hungary’s most famous wine, the sweet Tokay. This wine, too, is mostly Furmint (78%) with the balance being made up of Hárslevelu.

This wine is actually a single vineyard bottling of a 40 acre vineyard site called Lapis in which those two varietals grown that same proportion along the main road to Bodrogkeresztúr a stones throw away from the river Bodrog. The vineyard faces South and slopes up in rambling bulges away from the river which brings thick morning fogs to cool the 26-year-old grape vines. In this vineyard, as in all Királyudvar vineyards, aggressive pruning and water management techniques result in extremely small yields of very high quality grapes.

While labeled as “late harvest” it’s important to note that this wine does not resemble any late harvest wine I have ever had. It can only barely be described as “semi-dry” and in some circles could pass for a highly aromatic, completely dry wine. It does have a small bit of residual sugar, but is definitely a table wine made for food rather than as an aperitif or dessert wine.

One of the first wines that Királyudvar has produced, this wine comes from what is described by the winemakers as one of the best possible vintages imaginable, certainly the best year of the decade, and promises to age spectacularly.

Unfortunately I don’t know much about the winemaking for this wine, but I’d like to. If anyone has any information, I’d appreciate it.

Tasting Notes:
A light straw color in the glass this wine has a mysterious and delightful nose of pears, white peaches, candied cashews and honey. On the tongue it is silky and just barely sweet with primary flavors of sarsaparilla, honey, chamomile and various floral notes. It finishes long, with a nice level of acidity and slight hints of pine sap. This is a complex wine, and one that seems like it would do interesting things over time in the cellar, or at the very least, last for quite some time. It is definitely one of the more interesting wines I’ve had in my mouth in a while.

Food Pairing:
This wine goes beautifully with meatier fish dishes (though I also tried it with a beef brisket and it was fantastic). I suggest matching it with something like this miso glazed roasted black bass.

This wine can be purchased online.