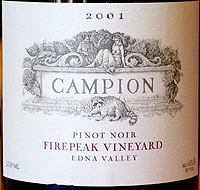 I always admire winemakers who have a singular dedication to a particular varietal and I’m always excited to try their wines whenever I come across them. If, after decades of drinking and making wine, a winemaker forswears all other types of grapes but one, you’ve got to believe there’s something special about that relationship.

Larry Brooks is one of those winemakers, and his Campion Vineyards Pinot Noirs are some of the more exciting and original wines in California right now in my opinion. When I hosted a “Small is Beautiful” wine dinner at Manresa recently and needed a small production Pinot Noir in my lineup, his were top of mind.

Brooks comes to winemaking by way of literature, science, plants, and racing bicycles. As his web site so wittily notes: “He got a BA in Botany from Rutgers University, but what was more important by far was the minor in Art History. At the time, Larry thought he was studying Art because the girls were prettier and the parties were wilder in the Art department than in the science departments. Little did he know, these early studies in aesthetic analysis unwittingly prepared him for the type of intuitive decisions that are at the heart of winemaking.”

Brooks later met his future wife and his future passion at UC Davis where he flirted with both (his wife and California wine) while getting a degree in Plant Pathology. After wandering the roads of post graduate employment Brooks eventually found his way to Acacia, and its founder, Mike Richmond. Brooks spent 19 years working practically every job in the house, and eventually making their wine and managing the whole operation before leaving for a stint as an executive at The Chalone Wine Group. After a couple of years there, including the founding of Echelon Vineyards, Larry struck out on his own with a vision to make the wine that captivated him more than any other.

Says Brooks, “Which wine to make was hardly a decision at all. Pinot Noir is the central and essential wine. It has been and will remain my favorite….My approach to crafting Pinot Noir is informed by my deeply held belief in terroir.
No other wine shows this aspect of wine so clearly as Pinot. If wines are the lenses through which we view the place and time of their creation, then Pinot is the most optically true. It is transparent to the effects of soil, weather, and climate.” With this in mind, it is hardly surprising that Brooks has chosen to produce small lots of Pinot Noir from vineyards ranging all over Northern California, from the Edna Valley to Carneros.

This particular wine comes from the Firepeak Vineyard in the Edna Valley, 6 or so miles inland from the coast and just south and a little west of San Luis Obispo. Here, low ridges of light volcanic soil sweep back up towards the eastern hills and the valley opens to the west, allowing nighttime fog to creep in. This region of the state has one of the longest growing seasons anywhere in California, and according to Brooks is particularly suited to a particular clone of the Pinot Noir grape known as clone 2A. It is this clone which makes up the majority of the vines in the Firepeak vineyard, along with Dijon 777.

Brooks refers to this wine as his “reserve” which to him means special selection of both the fruit and the barrels. After destemming the fruit is fermented in large open top vats and punched down regularly. For this wine Brooks only uses the free run juice (juice created by the weight of the crushed grapes, rather than that which is pressed out using mechanical means). After fermentation the wine is aged (each clone separately) in French oak barrels with strict proportions of new and older oak. For this wine, Brooks selected what he felt were the best tasting eight barrels of the clone 2A and one of Dijon to make his final blend and the mere 200 cases or so of this wine that get released every year.

Tasting Notes:
Light garnet in the glass, this wine has a very pretty nose of pomegranate, cranberries, and dried cherries with hints of black tea leaves and damp earth. In the mouth it is luscious and smooth with primary flavors of redcurrant and raspberry buoyed on the palate with excellent acidity. The fruit is perfectly balanced with a slight gamey, earthy element in the body of the wine, with a complex, light tannic structure that leads me to believe the wine will age extremely well. It finishes delicately, but with excellent length. In my opinion, this wine is a perfect example of all that is good about California Pinot Noir.

Food Pairing:
The winemaker recommends this be drunk with “anything that flies” and I couldn’t agree more. It’s a bit of a cop out to pair this wine with roast chicken, because, let’s face it, EVERYTHING tastes good with a properly roasted chicken, but trust me when I say that this is the perfect wine for it.

You can purchase this wine on the Internet.