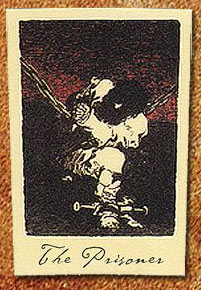 This wine review is my entry for this month’s Wine Blogging Wednesday, the global online wine tasting event where bloggers all over the world drink and review a wine based on a theme chosen by the host. This month, which I predict will be the most popular month in the event’s history, is hosted by the charming Clotilde of Chocolate & Zucchini For this month’s theme, she has chosen Like Wine For Chocolate, encouraging us all to select wines to drink with chocolate cake.

Look at that guy over there on the right. Doesn’t he look like he could use some chocolate cake? Or at least a hot shower.

The Prisoner is an enigmatic little wine produced by Orin Swift Cellars in St. Helena, California. It is wildly, and somewhat inexplicably popular, not because it’s a bad wine — far from it — but mostly because it’s not a typical wine, and certainly not a typical Napa wine. Sometimes I think its popularity might have as much to do with the guy on the label, poor soul, as much as the fruit laden contents of the bottle.

Orin Swift is the project of one David Swift Phinney, a young man who never would have predicted that one day he would be a winemaker. A fateful trip to Italy during college as an exchange student stuck him with a roommate whose family was in the wine business back in the States. Apparently the two of them drank a lot of wine over a semester, and upon his return to the States, the 20-year-old Phinney gave up the dream of being a lawyer and instead focused all his energy into getting into the wine business after graduation. His initial foray into the wine world was writing research papers on grape varietals for a university agriculture department. Knowing that he wanted to be closer to the winemaking, he sent off a volley of letters to anyone and everyone he could think of in Napa asking for a job doing anything from working on the bottling line to answering phones. His efforts yielded only one reply. But one was all Phinney needed, and after that first stint helping out with the crush at Mondavi, he went on to lend increasing amounts of help at Opus One, and then Whitehall Lane, where he learned from winemaker Dean Sylvester.

Now 31, he has his own label, sporting images from one of his favorite painters, Goya, and bearing the name of both his parents: Orin for his dad’s middle name, and Swift for his mother’s maiden name. He produces about 1400 cases of wine and makes a Sauvignon Blanc and a Cabernet in addition to The Prisoner. He is also the winemaker at Gaudeamus Vineyards and Bennet Lane Winery, and manages several vineyards throughout the valley.

This wine is a very unusual blend of Zinfandel (40%), Syrah (20%), Cabernet Sauvignon (20%), Petite Syrah and Charbono (10% each). This sort of blend actually wouldn’t have been uncommon 50 years ago, when many vintners (mostly in Europe) would make field blends, which basically involved harvesting all the grapes in a particular vineyard, no matter what the varietal, and crushing them together. This wine is not a field blend, however, as each of these varietals was selected from specific vineyard sites like Tofanelli, Morisoli, Page Nord, and Marston, all of which are top notch Napa vineyards.

What is it about this wine and chocolate? Well, to be honest I didn’t go out and buy a wine specifically to pair with chocolate. In fact, I only remembered that today was Wine Blogging Wednesday at about 4:00 in the afternoon. So I tramped down to the cellar to see what I had and was faced with the same choice that I am often faced with at restaurants: dessert wine or red wine. I’m not a huge fan of dessert wine and often end up drinking red wine with my desserts, especially chocolate. So what do I look for in a wine to pair with chocolate? Typically I look for a wine that has bigger fruit flavors, but not without some complexity. A lot of Zinfandels are just too much about the fruit to work well, but I knew this wine had some other things going on in it, so I decided to give it a try. To be honest, though, this is really a cheese wine more than it is a chocolate wine, but I enjoyed it with my chocolate cake nonetheless.

Tasting Notes:
Dark ruby in the glass this wine has a nose filled with dark fruit aromas — bing cherries, licorice, blackberries, and hints of mocha. In the mouth it is velvety and smooth with primary flavors of cherries and blueberries, hints of chocolate, vanilla, and several other notes that are hard to pin down. There is a decent amount of acid in this wine, considering the large amount of Zinfandel and Syrah inside. The finish is moderate with a small amount of heat from the alcohol (15.2%).

Food Pairing:
Well, chocolate, of course. Not raw chocolate, though, which can be too bitter for most wines, but rather something baked like these Boca Negra Chocolate Chipotle cakes.

This wine is readily available on the Internet.