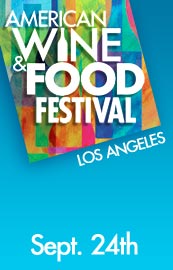 Los Angeles does everything bigger, and the 23rd Annual American Food & Wine Festival is no exception. Held on the Universal Studios Back Lot, this event showcases the cooking of over forty of the nations top chefs, and roughly seventy-five wineries and importers from California and around the world.

You might initially scoff at the fact that one of the primary sponsors is ConAgra Foods. There is certainly a bit of irony in the fact that a huge industrialized agriculture, processed foods manufacturer is sponsoring an event where 99% of the chefs attending would rather eat their own toque than use their sponsor’s ingredients or cuisine. However, the fact that the whole event raises over $1 million dollars annually for Los Angeles charity Meals on Wheels, means that even the most rigid Slow Food devotee might consider going.

Last year there were more than 2000 people in attendance, which means that even for VIPs this is likely to be a crowded event. I’ve never attended so I can’t tell you what your chances are of getting a few minutes to chat with Mario Babbo alone are, nor whether you’ll actually have to wait on endless lines to get tiny samples of the food you want to eat or whether it’s pretty easy to stuff and drink yourself silly.

At the very least I know two things about this event: it’s for a good cause, and for those who stay until the end, it’s likely to make for some pretty good people watching, especially as people make it to their tenth or eleventh wine table.

Tickets are $250 in advance, $300 at the door. They can be purchased by sending e-mail to: tickets@wolfgangpuck.com