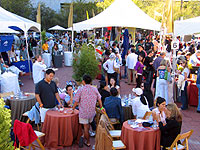 I go to a lot of big public food and wine events throughout the year. These events are different from the public and trade-only wine tastings, which are focused only on wines. They invariably involve not only wine producers pouring their stuff, but also restaurants offering tidbits to eat, food producers and manufacturers hawking their wares, and more. I attend to keep tabs on the restaurant scene, to learn about new gourmet products, to check out new wine producers and see what others I already know are up to.

Not all of these big food and wine festivals are very good. Some of them are downright awful. But if there is one in particular that I look forward to going to every year, it is most certainly the San Francisco FallFest, put on by San Francisco Magazine and various other supporting organizations. This event stands head and shoulders above its brethren for the simple reason that it’s done right. It’s well organized, classy, and all around fabulous.

Let’s start with the simple details: When you walk into the event you get a wine glass, but not some crummy little

tasting glass that you can’t fit your nose into, a full sized Riedel Bordeaux wine glass. You’re also handed a very handy little plastic plate, which has a wine glass holder built right into the side of it. Should your fingers get sticky from a stray piece of food, there are portable hand washing stations placed strategically around the event that offer lukewarm water, liquid soap, and paper towels integrated into a single plastic console with a washbasin. There are tables with free bottles of water every fifty yards, and plenty of seating in the sun and in the shade for those who want to stop wandering for a while and just chow down (or catch their breath and digest, more likely). No other event that I’ve had the pleasure of attending in the Bay Area (or anywhere else for that matter) offers these amenities at this level of class.

And then there’s the food. Many of San Francisco’s top restaurants come out to showcase their food. And when I say the restaurants come out, I don’t mean their third string kitchen staff and a couple of people from the front of the house. I mean the name-you-would-recognize chefs and chef/owners are often there, handing you a bit of canapé or a dish of tastiness. The quality of the food is extremely high and one of my favorite aspects of the event is that people don’t just trot out simple crowd-pleasing dishes that you’d see anywhere. They’re doing some really interesting stuff.

From Rubicon, cubes of watermelon stuffed with creamy goat cheese infused with curry oil and topped with herb salad, pita bread crumbs and pumpkin seeds burst with flavor in the mouth and immediately generated urges to grab as many of these as I could and run for some corner where I could devour all of them.

From the Ritz-Carlton, Half Moon Bay, an incredible Moroccan spiced lamb tartar with mustard ice cream and bread crisp was a perfect dish for a sunny fall day, with the cool creamy ice cream playing counterpoint to the spices 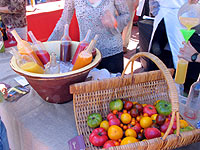 and butteriness of the raw lamb.

From Postrio, the winner in the dessert category with a huckleberry crumble and buttermilk crème fraiche ice cream that had people lining up and swooning.

Special mention also needs to be made of chef Michael Tusk at Quince who brought big clear bottles of heirloom tomato puree, that he mixed and matched on the spot with fresh chopped shallots and herbs to create delightfully colored and deliciously flavored tomato soups; and also IronWood Barbecue, a new restaurant that dished out pulled pork and brisket all day long to exclamations of delight from all tasters.

Many of the chefs present were also attending to give cooking demonstrations, which happened throughout the day. I stopped by at one point to watch John Clark from Foreign Cinema create a tomato and lemon cucumber salad for a group of salivating onlookers.

Various live music performers played throughout the day, though with the weather as beautiful as it was, people 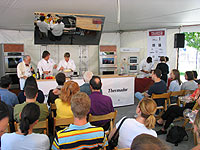 would have been just as happy had the soundtrack to their munching been the passing cars on the Embarcadero.

And of course, there was wine. Did you think I was going to forget that? Last year this event introduced me to several small California producers that I had never heard of, which was quite astonishing for a non-wine specialty event. Mostly these events attract the larger, well funded wineries who can afford to send a couple of people and a few dozen bottles down to San Francisco (of course several of those types of wineries do attend). It can only be due to a special effort on the part of organizers that smaller, family run wineries are so well represented.

This year the overall quality of the wines was slightly lower in my opinion than last year, but there were still some excellent wines on offer. Below you’ll find my list of favorites. As there were many wineries whose wines I was very familiar with, I didn’t hit all of the tables, so omission of wines here does not indicate poor scores.