The Best Sake In The World?: A Report from The Joy Of Sake Tasting 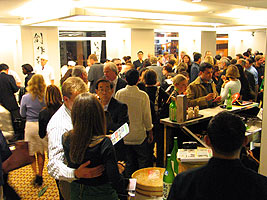 Maybe they should call it the Jostle of Sake Tasting. If anyone needed an affirmation that sake is hot right now, they needn’t have gone farther than the main ballroom of San Francisco’s Hotel Nikko on Thursday night for the Joy of Sake tasting. Several thousand people packed into the ballroom, and the hallways, and the side rooms to taste nearly 200 different sakes and to sample foods from some of the Bay Area’s top Japanese, Asian, and seafood restaurants. It was the largest tasting of sake held outside of Japan. It was also, in a word, packed, to the point of seeming oversold. If I hadn’t had a press pass to the event, I would frankly have considered asking for my money back. I know, I know, some of you warned me that this was an event that tended towards the hectic side of the spectrum, but I had to go see for myself.

First, it is the only wine or other alcohol tasting I have ever been to that had no, and I mean ZERO spittoons. Not only that, they didn’t even have any spit cups (though if they did, who knows where anyone would have dumped them?). I had to empty out a plastic water bottle that I happened to have with me and spit into that. How can anyone imagine that this was a good idea? This practically guarantees that by the end of the event the volunteers will have to be shoving the reeling drunks out of the place, and it makes it impossible for people who are actually interested in learning something, or god forbid trying to scope out products for their restaurant, to be able to do that. 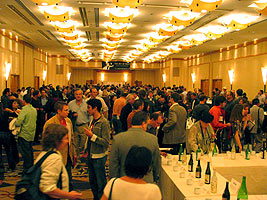 Second, there were no proper glasses available for use in tasting. Instead, everyone picked up small plastic cups at the entrance as they came in, warned by a sign to “be ecologically minded and take only ONE.” Ecologically minded by taking only one of several thousand plastic cups that we were all going to throw away after two hours? Come on. And while I know that no one is going to go out and get the special Riedel sake glass (what, they haven’t made one yet? Just you wait.) just for this tasting, at least a wineglass would have shown proper respect to the sakes being poured, and would have helped better appreciate the delicate aromatics of these liquids.

Thirdly, I’ve never seen an event, even one as short as the abbreviated two and a half hours of this one, where fully twenty to thirty percent of the food vendors ran out of food in the first 45 minutes. That is just poor planning or poor expectation setting or both on the part of the restaurants and the organizers.

I felt bad for all the restaurants, especially the ones that did manage to bring enough food. The ones who ran out early got lucky. The others worked furiously and non-stop while lines of people waiting to be fed snaked around half the ballroom at one point. Luckily I didn’t arrive with a plan to eat very much, because I would have spent all my time waiting for (admittedly delicious looking) bits of seared toro on a sesame cracker or fresh shucked oysters.

Instead I spent my time tasting sake, which was difficult enough. The organizers grouped the sakes by Junmai, 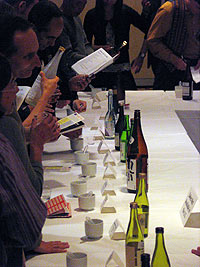 Ginjo, Daiginjo, and Yamahai (Kimoto), and then further subdivided the Daiginjo sakes into two groups, as well as offering a third group of sakes that were not available in the United States. This method of grouping was adequate if a bit misleading, as Ginjo sakes and Daiginjo sakes are also often Junmai sakes, and Yamahai and Kimoto actually refer to a sake making technique that can be used for sake of any grade. Junmai refers to sake that has no alcohol added (usually only a small amount to ‘bring out flavors and aromas’) during the fermentation process. Ginjo and Daiginjo, of course, are premium grades of sake (Daiginjo being the highest) determined by how much of the rice grain is polished away before brewing takes place. So therefore it is possible, and not uncommon to have a Junmai Ginjo Yamahai sake or a Daiginjo Kimoto sake. Confusing, eh ?

Finding one’s way to these various tables was difficult, not only because of the crush of people, but also because they were poorly labeled (with only small signs that could not be seen from afar) and because the organizers did not provide a map or any guidance telling visitors where the various tables were located. Instead they relied on volunteers occasionally yelling (I’m not kidding) randomly to the nearby crowd that there were more sakes available for tasting “out there” and pointing to the hallway.

The groups of sakes were lined up next to each other in large rectangular arrangements of narrow tables. Each sake was represented by its bottle, and a label with the name of the producer and the name of the sake, along with a alphanumeric code that matched an entry in the brochures available at the entrance. In front of both the bottle and the label sat a small porcelain dish filled (and periodically refilled by volunteers) with the sake, and a “micro-pump” which was basically a big eyedropper. The idea being that in order to taste the sake you fill up the dropper and

squeeze a small amount into your plastic cup and then replace the eyedropper.

When I first saw this arrangement I was wary, but it actually proved to be a fairly usable system. It eliminated a few of the hassles associated with large public tastings. It drastically reduced the number of people required by the event to actually serve customers (though also thereby reducing the number of people available to answer questions about individual sakes), and it prevented the usual log-jam of people waiting to get the attention of the person holding the bottle in order to get a taste of something. It was still tough to get to the sake you wanted to try just because of the volume of people present, but once you got in front of the bottle you wanted to try, you could get a taste and then get out of there. The eyedroppers could have been a little bigger, but the volume of liquid they provided was adequate and they helped ensure that most of the sakes lasted far longer than the food.

Before I move on to my tasting notes I want to make one thing clear: I think the ideas behind the origins of this tasting were fantastic, and I’m wholly supportive of the folks who put it on each year. I may be critical of its execution, but that’s because I hope someone will make some changes to improve it for all of us. On that note, I strongly recommend that the organizers hold a trade and media tasting at a separate time, and with more presence 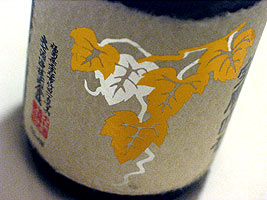 from people who can answer questions about the sakes and their distribution terms, etc.

TASTING NOTES
I’ve never been to a sake tasting this large before, and one of the things I learned was that it’s actually really tough. Not just because the aromas and flavors of many sakes are subtle and mellow, but also because sake seems to be harsher on my palate than wine, despite having comparable alcohol levels. Upon a little reflection I think this is because, much more so than wine, sake requires food to be best appreciated. I think it also shows better when chilled and all of these were at room temperature. The net is that I tasted fewer sakes than I thought I would be able to, and was less impressed by many of them, including some of my all time favorites.

I’ve grouped them as they were grouped at the tasting and provided as much information as I know about each. They are labeled in the format: Producer/Brewery “Name of Sake,” Prefecture of Origin. Sake’s marked with “*” are not available in the US at the current time.

JUNMAI SAKE
Junmai is both an adjective, describing sakes to which no alchohol has been added during the fermentation process, and is also a class of “premium” sakes in which at least 30% of the rice kernel has been polished away before brewing.

YAMAHAI / KIMOTO SAKE
Yamahai sake refers to a type of sake that is made without the pounding and pulverizing of the rice mash that have historically been a part of the sake making process. Instead the rice is dissolved by the action of bacteria and microbes which also lend a more rustic flavor to these types of sakes. Kimoto sakes are slightly different in that the pounding and pulverizing has been replaced by a stirring or even a pureeing action along with the biologic processes common in Yamahai sake.

GINJO SAKE
Ginjo sake is a distinguished class of “premium” sake made from rice kernels which have been polished to 60% of their former size. Ginjo sakes can be either be just plain Ginjo (alcohol added during fermentation) or Junmai Ginjo (no alcohol added).

When it became clear to me that my palate was becoming exhausted much more quickly than I thought, I stopped tasting Ginjo sakes and moved to Daiginjo, which I tend to prefer.

DAIGINJO SAKE
Daiginjo sake is a distinguished class of “ultra premium” sake made from rice kernels which have been polished to less than 50% of their former size. Just like Ginjo sakes, Daiginjo sakes can be plain Daiginjo (alcohol added during fermentation) or Junmai Daiginjo (no alcohol added).