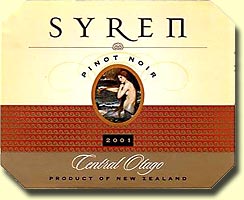 If you you take all the Pinot Noir winegrowing regions of the world and you subtract out all that are in Europe, and likewise all that are on the west coast of the United States, what are you left with? Quite a few places, really, but all of them might be lumped together in a flight of fancy under the name “New New World.” Call them up-and-coming, call them fringe, call them frontiers of winemaking — it was from these regions that bloggers around the Internet were instructed to select a wine for Wine Blogging Wednesday 14, hosted by Jens at the Cincinnati Wine Garage.

While not new on the map of Pinot Noir growing regions within the aforementioned category (quite the contrary, it has been well regarded since the 1980s), Central Otago, New Zealand will always be a “frontier” of winemaking if only because of its particular geography. Otago is the southernmost winegrowing region in the world. Sandwiched literally between rainforest and desert a mere 20 miles in either direction, this area of New Zealand’s southern island has notoriously variable weather, and extremely varied soil types. “No two seasons are the same,” says winegrower Greg Hay, who in 1985 came to Otago with his brother Rob to search out new terroir for Pinot Noir. The Hay brothers found Otago’s soils and temperature ranges to be perhaps a slightly more extreme version of Burgundy, and without much precedent, they settled down to make wine. At the time Central Otago had very few vineyards (none of them commercial and none of them planted with Pinot Noir), but that didn’t stop the Hay brothers. “We doubled Otago’s vineyard land, and we had only twenty-five acres!” says Greg. Together the brothers operate Syren Vineyards, named after an obscure spelling of “siren,” the mythic mermaids who songs purportedly drew sailors to watery deaths.

Greg Hay has an extensive and well known background in viticulture, having worked as a consultant and vineyard manager for dozens of New Zealand wineries, including the other property he owns with his brother, Chard Farm Vineyards. He is also a licensed helicopter pilot, and is fond of flying over his vineyards and the surrounding areas to get a different perspective on the terrain. Rob Hay is an accomplished winemaker who studied in Germany for years before returning to New Zealand to work for a number of wineries before going into business with his brother and beginning their search for the ultimate Pinot Noir terroir.

The Hays keep yields low (1.5 tons per acre) in their vineyards and try to crush as many whole clusters as they can. The fruit for this wine undergoes a cold soak for one week before fermentation, with approximately 20% of the wine fermented from whole clusters. The wine is lightly pressed and then is aged in 30% new oak (most likely French) and is fined with egg whites prior to bottling.

Tasting Notes:
This wine is quite possibly one of the darkest Pinot Noirs I have ever seen, a deep ruby color with hints of blue. It has a powerful nose of spicy stewed cranberries, blueberries, and a hint of damp wool. In the mouth it is silky, with a gorgeous mouthfeel, excellent acidity, and tastes….well…tastes like a cool-climate Pinot Noir on steroids. Deep dark cranberry and redcurrant flavors dominate with some blackberry flavors, and a hint of exotic spices and touches of green, peeled willow bark as the wine finishes long. This is definitely made in a hedonistic, but restrained style (relatively tame alcohol levels at 13.5%) that make it a pleasure to drink, albeit with slightly less complexity.

Food Pairing:
It’s hard to imagine, but I can personally vouch for the fact that this wine is a perfect accompaniment to a carpaccio of fresh Emu meat. I know. I know. It’s tough to get Emu where you are, but that is what I had with this wine and it was quite an extraordinary match.