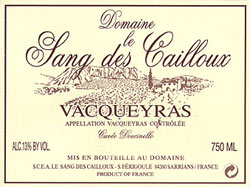 I think I’ve really started to fall in love with the wines of Vacqueyras, in the Southern Rhone. I haven’t quite gotten to the point where I can spell the name of the appellation without carefully checking twice to make sure I’ve got my “q” and “y” in the right places, but the more of it I drink the more I want to drink. If you catch my meaning.

Perhaps the crown jewel of this tiny appellation that sits nestled against it’s much larger and more famous (though not much easier to spell) neighbor Chateauneuf-du-Pape, Domaine Le Sang des Cailloux may have single-handedly rescued the land on which it sits from obscurity. Run by the energetic Serge Ferigoule, this domaine (whose name translates to “Blood of the stones”) has been raising the bar for the quality and power of Vacqueyras wines for the past 15 years.

Of course, I’d be tempted to buy a wine named from any winery named “Blood of The Stones,” no matter what it tasted like and regardless of whether the name was just invented by some savvy marketer. But this is, of course, Provence, and France, and country winemaking, so in the case of this “Blood of The Stones” we’re getting the real deal. Ferigoule’s vineyards are in the garrigue (more on that in a moment) where the soil is packed with stones from the size of grapes to the size of melons. This pebbly, gravelly, chunky, rocky cobble filters the rain down to the roots of the vines where it is sucked up greedily by the 50+ year-old vines of Syrah, Grenache, Cinsault, and Mourvedre and poured, every last drop, into the tiny quantities of fruit that these vineyards manage to produce. Getting much wine from these gnarled old plants, is indeed like wringing blood from a stone (not to mention what it must be like working the vineyard soil with all those stones).

Some say that Cailloux’s wines even taste of stone, which isn’t hard to imagine. But the feature that most people notice immediately is the aroma of the wine, which brings us back to the concept of garrigue. Garrigue is at once a feature of the landscape, a sort of feeling particular to southern France (and Provence in particular) and a characteristic aroma that is found both in the place and the wines produced from it.

Literally, the garrigue is a common zone of the Provence countryside characterized by low rolling limestone hills whose arid soil prevents lush growth, and instead hosts small scrubby bushes, trees, and herbs. The garrigue grows lavender, rosemary, thyme, scrub oak, savory, sage, juniper, heather, wild fennel, oregano, wild asparagus, and diminutive pine trees. This mashed mélange of aromatic herbs, plants, and trees is the olfactory identity of Provence. It mixes with sunlight to create the mood of the place. It perfumes the air of the countryside, and somehow, finds its way into the wines. The best bottles of Chateauneuf-du-Pape, Gigondas, and Vacqueyras can wrap up this perfume of earth, and flower, and herb, and tree and deliver it in a small burst of aroma that is intoxicating.

But back to Le Sang des Cailloux. I don’t know much about Serge Ferigoule, but I really like the name he chose for his winery, and I’m also tickled that he names his wines after his three daughters. This one, Cuvee Doucinello, represents about 70% of his production. After harvesting, the grapes are crushed and fermented in concrete tanks. The wine is then aged for a year in a mixture of old, old oak casks, and several large (demi-muid) one and two year-old oak barrels. The varietal mix is Grenache 65%, Syrah 20%, Mourvedre 10%, and Cinsault 5%. Approximately 6000 cases produced.

Tasting Notes:
A medium blood red in the glass, and slightly cloudy, this wine has a lovely country nose of earth, garrigue, and leather mixed with cherries and raspberries. In the mouth it is medium-bodied and presents tart cherry and unripe blackberry flavors (you know, the red ones you sometimes couldn’t resist eating during the summer as a kid) with very light tannins and complex, hard-to-pin-down flavors of leather, stone, and black tea, as it tapers towards an impressively long finish. This is a wine I would love to drink after 10 years in the cellar. I suspect it ages extremely well.

Food Pairing:
The complex earth tones and aromatics of the wine, coupled with its medium body make it a lovely food wine and one that will go well with aromatic herbs. I’d love to drink this one with a mortadella stuffed pork loin and rosemary roasted potatoes.

This wine is available for sale online. It is imported by Kermit Lynch.