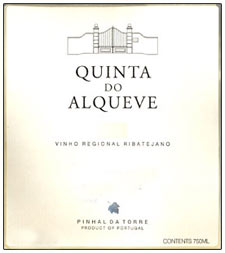 Perhaps we can make this week be about fantastic wine bargains. Earlier in the week I blogged about a great New Zealand Pinot Noir for about twelve bucks, now I’m telling about what might just be the best white wine I’ve ever had at the $11 price range.

Let’s start off by asking the most obvious question: Who was Fernão Pires anyway, and why is there an obscure Mediterranean Grape named after him? Well the first answer is that Fernao Pires is the same grape as one called Maria Gomes elsewhere in Portugal, which is where this grape makes its home, and has the distinction of being the most widely planted varietal according to some. But that’s hardly a useful answer. Were Fernao and Maria the same person — are we dealing with some crazy historical cross dressing viticulturalist? On this the oracles and experts of wine are silent, though not quite as silent as they were about Pedro Ximinez. What we do know is that Fernão Pires, aka Fernão Pires de Andrade, was a very famous historical figure in Portugal. As a merchant and official delegate of the Portugese government, he was on the delegation responsible for opening up trade relations with China in the year 1517.

What that has to do with wine, or specifically a nicely bodied white varietal that is blended into much of Portugese dry white wine and sherry, we may never know. What I do know is that I like it a lot, and thanks to the hard work of Paulo de Saturninno Cunha and Robert Kacher, it’s now available from a winery called Quinta do Alqueve. Located 40 miles north of Lisbon, this small property has always been the Cunha family farm, but 20 years ago it was transformed through the planting of 100 acres of vines in the dry calcite rich soil. Cunha planted grape varieties from the Porto region of Portugal, and for the last 20 years he has been farming them with care: thinning the crop twice per season to keep the yields extremely low, picking and sorting everything by hand. This type of careful attention has garnered a lot of attention for Quinto do Alqueve, and it has been picked by several Portuguese journalists as the best young winery in the country.

Importer Robert Kacher works carefully with Cunha, as he does with most of his clients, through the fruit selection, vinification and bottling process, making the end product a collaboration between winemaker and importer. Kacher has loved Portugal for years, and spent some of his early career importing Spanish and Portuguese wines before settling his business to focus on France. When Cunha contacted Katcher, with the suggestion that he take a look at his wines, it was just the impetus needed to get him back to Portugal.

This wine is 82% Fernao Pires, which has been 100% destemmed and fermented in steel, blended with 8% Chardonnay which has been barrel fermented (though what kind of barrels and how new I am not sure).

Tasting Notes:
The color of pale straw, this wine has a mouthwatering nose of Fuji apples, fresh cut grass, and acacia honey. In the mouth it has the crispness and excellent acid balance of a great European Pinot Grigio or even Sauvignon Blanc, but with a little roundness and silkiness, presumably from the Chardonnay. The primary flavors are of unripe apples and pears, with hints of minerality and a little floral note as the wine finishes long, especially for a crisp white. Delicious.

Food Pairing:
Shall I pair thee with a summer’s day? I’d be hard pressed to find a foodstuff that this wouldn’t go with, provided we weren’t in the meat department. You couldn’t go wrong putting it up against a fig and goat cheese crostini.

This wine may be tough to find. The best thing to do is to contact the importer and find out if there’s a retailer who carries it in your area.