Earlier this week I wrote about the stages of a self-education in wine. In one of those stages the curious and committed wine drinker must start to define benchmarks for their experience and their taste. By far the best way to do this is to somehow find an occasion to drink some of the best wines in the world. Now some wine lovers I know, especially those who are winemakers, would love to sit around all day long and argue with you about what wines are actually the best in the 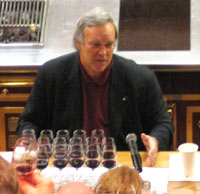 world, but the reality is that it’s fairly easy to pick them out, especially from the major wine regions of the world. Mostly they’re a combination of the names that have been vaunted for centuries, and newcomers who have received the accolades of among others, Robert M. Parker, Jr.

So, when Parker comes to the Culinary Institute of America on October 20th with 14 Grenache wines to hold a guided tasting, it seems to me that the event is not only an opportunity to listen to the critic talk about wine for a couple of hours, but to calibrate your palate for one varietal (at least for recently made interpretations of it), and learn something in the process — if only, in the end, what Robert Parker thinks makes for the best Grenache in the world.

I was able to attend the first of these guided tastings with Parker last February and thoroughly enjoyed the experience, if only for the opportunity to listen to Parker talk about wine and to chat with him a bit. I came away from the experience with a much more nuanced and appreciative view of the guy than I’ve gotten over the years through his writings. Of course for those of us in the business of reviewing wines, there’s also the slightly competitive aspect of trying to see how your palate calibrates with his as the tasting is fairly interactive in its discussion of tasting notes for the wines under examination.

The tasting takes place in one of the classrooms at the CIA. Around 60 people attended the last one, and we sat in stadium-style seating with 14 glasses of wine in front of us and a handy book with nicely printed copies of the wine labels and space for notes. The wines had all been double decanted for five or six hours prior to the tasting, and had been checked for faults and spoilage. We then chatted and tasted our way through all 14 wines.

This second tasting will be much like the first, with the proceeds again going to fund scholarships at the Rudd Center for Professional Wine Studies in Parker’s name. Through my contacts at the CIA (that’s a fun phrase isn’t it?) I’ve gotten a hold of the list of wines that they are lining up for the tasting:

Interesting, huh? Certainly all pretty young wines, but that was also the case for the Syrahs we tasted last time. All will have many more years of life ahead of them, but should be fun to try now.