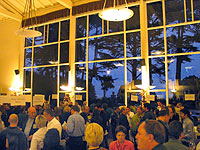 As regular readers know, I pride myself on my coverage of major wine tasting events. I go, I taste a lot of wines, I’m very diligent about it, and I report on the tasting very quickly, sometimes the same day. Well perhaps I’m slipping a bit, but it’s been over two weeks since the Wine & Spirits Magazine Top 100 Wineries and Wines of The Year tasting here in San Francisco and I’m just now getting around to writing it up.

My delay has nothing to do with my lack of enthusiasm for the event. It was a very good tasting. The quality of the wines on offer were very high, and the food was plentiful and quite good. The folks running it could have done a 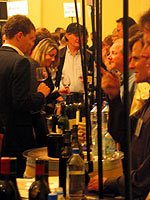 slightly better job arranging the tables and giving people a sense of where to go (the wineries were mysteriously grouped — one room clearly was dedicated to “big reds” but another held both the aromatic whites and the pinot noir, while another held Spanish wines and zinfandels, and so on) but in general it was a nicely assembled event. 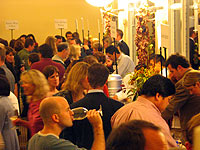 I tasted most of the wines on offer, though I ended up skipping a few in the effort to finish up during the narrow press preview before the public arrived and it became difficult to taste.

It seems as if quite a few of the wineries that were accorded the honor of being in the Top 100 were there (though there were notable absences, especially among the French wineries. Petrus didn’t bother to show, and neither did a few others). It was interesting to note, however, how many of the wineries actually poured the specific wines that had been highly rated by the magazine. Chateau de Beaucastel, Bruno Giacosa, and M. Chapoutier brought out their top wines (including the 206 case production, $200 per bottle Chapoutier L’ermite Blanc), yet some wineries clearly brought their lesser wines for the tasting, which seemed rather silly and sort of cheap to me. 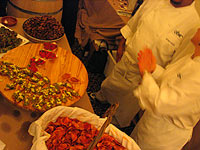 The food offered was quite good for one of these public tastings, including shucked-to-order oysters, excellent cheeses, and canapés by some excellent restaurants in the Bay Area including Cesar and A16 among others. I especially liked a little mouthful by Cesar which seemed to be Jamon Serrano over a slightly sweet jam spread on a nice baguette round. It went perfectly with some of the bigger wines on offer.

For the same reason it’s taken me a while to do this (being busy as hell), I’m not going to do my usual thing and review every wine at the tasting (or at least every wine that I tasted). I’ll list my highlights, which I figure is what most people pay attention to anyway, right? While it might be amusing for you to know which wines sucked, the much more relevant list are the ones that were fantastic, no ?