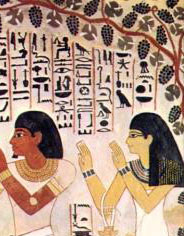 We’ve known that the Egyptians had wine for a long time. If the funky jars with wax stoppers and grapey residue in them weren’t enough, we had the gorgeous tomb paintings from the Tombs of Sennefer in the Valley of The Nobles in Luxor, Egypt showing in vivid color the growing, harvesting, mashing, and fermenting of grapes into wine. In fact, the specific paintings I’m talking about were some of the most beautiful and vivid tomb paintings that we saw anywhere in Egypt when Ruth and I were there this past May. Wine, which experts believe was introduced from Canaan several thousand years B.C., was a big deal for the Egyptians, so much so that it seems that it was a drink reserved for royalty.

One of the things that we have never know, strangely, is whether the Pharaohs drank red or white wine. This is because up until recently, the means did not exist to distinguish between residues of red and white wine. We knew it was wine, but we didn’t know what color. I guess this tells us also that red wine stains come out after about 6000 years — good news for some of us who spill a lot of it.

Now however, thanks to some advances in chemical analysis, we have learned that the ancient Egyptians indeed drank red wine. Not just any Egyptians either, but the most famous (to most of the word) King Tut. Yep, the Boy King went to the afterlife with several cases of his best stuff, carefully labeled by vintage year, vineyard, and winemaker.

The next trick will be, of course, to figure out just what varietal he was drinking. I’ve got my money on Pinot. for Tut’s sake I hope it was better than modern Egyptian reds. If not, he may be one eternally unhappy dude.