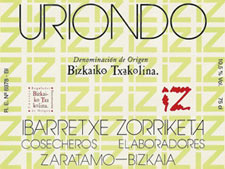 If I could find a wine like this once a month, for the rest of my life, I think I would die a happy man. Not that it’s such an amazing wine, it’s tasty but not mind-blowing, but its just got so much unique personality, and it is so different from what I drink on a daily basis. The world of wine is a wide and wonderful place.

But let me back up, since you may still be stumbling over the name of the thing, which to most Americans is quite a mouthful. The name of the producer is Uriondo, a small winery in the Basque region of Spain (the town of Bizkaiko, specifically). The name of the wine is Txakolina, a typical white wine of the region. To the best of my knowledge, it is pronounced like “choco-lina.” But it doesn’t really matter whether you know how to pronounce it. This isn’t one of those wines that people get fussy about. In fact, it’s got a special place in the hearts of the Basque.

Txakolina is currently synonymous with tapas in the Northern part of Spain. Popular for merely the last 1000 years or so, it was once a drink reserved only for aristocrats and kings. It then became a popular “village” wine, usually made in small quantities by families in different villages, and now it has become quite popular as an accompaniment to Tapas. It is the casual, easy drinking, unpretentious Basque white that nobody thinks twice about. In Basque eateries it is served fully chilled in tumblers or even water glasses, and is often poured from great heights into the aforementioned glasses, both for show and to break up the wine’s natural carbonic gas (it can sometimes be slightly fizzy, though this wine showed very little sparkle). I’ve never seen this pouring in action myself, but apparently some bars will even just cut a small piece out of the cork and then re-insert it into the bottle to provide an even slower, finer stream into the glass.

Txakolina is a D.O. wine (appellation controlled) that can be made in only three regions in Spain, one of which is Bizkaiko. It is traditionally made from the native grapes Hondarribi Zurri (25%) and Folle Blanche (70%). Never heard of them? Good. Me neither. Interestingly enough, though Txakolina is a white wine, Hondarribi Zurri is actually a red grape. This particular wine also contains about 5% Sauvignon Blanc.

All of the grapes come from the Uriondo family’s 7 acre vineyard which lies at a low altitude with a southeasterly exposure. The Hondarribi Zurri and Folle Blanche are fermented and aged in steel tanks while the Sauvignon Blanc is barrel fermented in American Oak.

Tasting Notes:
A medium straw color in the glass, this wine has a nose that screams juicy ripe pears, sea air, and a touch of honey. In the mouth it is zingy and crisp with acidity. It’s primary flavors are of tart raw quince and unripe pears with a slight earthiness and mustiness underlying the fruit that gives it a very unique and compelling character. The wine has a great finish which accentuates this mustiness as it becomes even slightly nutty in flavor.

Food Pairing:
What wouldn’t I like to try this wine with? It’s definitely, per the Basque tradition, an excellent seafood wine, and one that would be a perfect match for grilled lemon prawns.

This wine can easily be purchased on the Internet. Imported by De Maison Selections, NC.