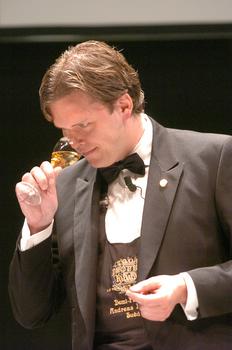 Annoucer 1: Jim, here comes the next contestant, Andreas Larsson, former winner of the Sommelier of Sweden award, and finalist several years running for the International Sommelier of The Year award.

Announcer 2: Yes Dave, he’s looking alert and trim in his tux by Lloyds of London.

Announcer 1: Jim, don’t you think those little bibs they all have to wear this year make the overall effect a little, well, lame?

Announcer 2: Rumor has it that his routine tonight will consist of the incredibly difficult Two Dishes, One Wine maneuver, where he tries to select one bottle of wine for two very different courses. He’ll certainly get points for technical difficulty.

Announcer 1: Larsson’s trainers say that he’s been practicing this maneuver for at least 6 months in each major culinary capital of the world. If a Sommelier was ever ready for this feat, he would be the one.

Announcer 2: Let’s hope the Russian Judge goes easy on him. You’ll remember at the 2000 event he was marked down for his —

Announcer 1: (breaking in): Sorry to interrupt Jim, but here’s the set up! The waiter has placed down the two plates!

Announcer 1: Yes Jim, and if that weren’t hard enough, it’s been paired with a Smoky Bacon and Pumpkin Soup. This is going to be quite a challenge.

Announcer 1: Yes, he certainly seems confident. Let’s see what he has chosen.

Announcer 1: The wine steward has poured him a glass. He’s sniffing. He has no balks tonight, so he could still send it back and select another wine without losing points.

Announcer 2: No, he’s decided. A quick nod of his head. He’s ready.

Announcer 1: It’s now being poured for the judges….. they are drinking it….and taking bites of the dishes….

Announcer 2: Remember, Dave, he has to beat Yishay Malkov’s 27.4 points in order to take the championship this year.

Announcer 1: The judges have rendered their scores…. they’re being tallied by the Maitre ‘d.

Announcer 1: THIRTY ONE! THIRTY ONE OUT OF FORTY! He’s done it! Andreas Larsson has won Sommelier of The Year in a decisive victory.

OK. Maybe that’s not quite how it went. But it did sound like an interesting competition. Congratulations to Andreas Larsson, 2005 International Sommelier of The Year.