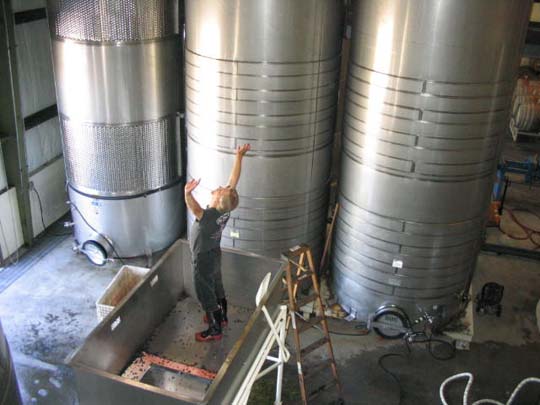 Sometimes we live in the country, sometimes we stay in town;
Sometimes we’re not who we think we are, when things come tumblin down…
I been out beyond the blue horizon, where the water tastes like wine,
Aw, but you know I can get just as lonesome, either side of the line…—Steve Edmunds “First Bird” July 2003

It’s always a surprise to see a picture of yourself someone has taken without your knowledge. I think when I see a camera point in my direction I become a different person; the impulse to compose myself is too strong to override, so it’s only when somebody sneaks up on me that I get a chance to see how I look to them.

On the last day of harvest, last October, as I stretched muscles weary from weeks spent shepherding the crop from vine to vat to barrel, my picture was snapped. I stood in the receiving hopper in rubber boots, my arms thrust up and out as far as I could extend them (just the way my physical therapist suggested that I do, to keep everything moving easily). It was a delicious moment—I had only one more bin of grapes to accommodate, which would appear before me in a couple of minutes, delivered there by the forklift. I felt immensely thankful that the weeks of rushing and racing to keep up with the ripening of fifteen or sixteen different lots of fruit in vineyards spread out over half the state of California, had passed safely to completion, and had yielded, in some cases, the best quality grapes I’d ever seen.

It was also a moment when I felt keenly the impending need to shift gears, to prepare for a different season. I’d been on a kind of automatic pilot for nearly two months; each morning when I rose there was no hesitation, I knew exactly where I had to go and what my tasks were. (In a way, it was not unlike playing music, where you just have to show up and play the tunes.) Now that the crush was ending, there would be so much to figure out! Ah, but there was still this one more bin to work through, one more tune to play.

When I saw this photograph for the first time, the person who took it said it looked like I was praying, or worshipping. I think that’s an accurate observation; in a way, I think that’s exactly right. I’m not sure I can find the line, any longer, between stretch and dance, between breath and praise, song and prayer.

I found myself, a few weeks ago, in Midway, Kentucky, (which, if I remember correctly, is midway between Lexington and Frankfurt) for a winemaker luncheon at a marvelous place called the Holly Hill Inn. I’d driven by the place last Spring and had heard great things from a number of people about the quality of the cooking done there. Now I would have the chance to experience it first-hand, and I was nearly drooling in anticipation. I’d arrived early, in the company of Mr. Pat Wylie, who represents my wine in the Lexington market, and who seems to know nearly everyone in central Kentucky on a first-name basis. As we waited in the foyer I picked up a four page pamphlet that turned out to be the (bi-weekly, I think) newspaper of Midway and environs. There was a photo on the front page—it was me!! Stretching. Praying. There was an item about the luncheon, and the tasting to be held afterward at Bacchus, the local wine and liquor store, and there was an article that came out of a phone interview the author had done with me several weeks earlier. I’d completely forgotten about it. But it had had its intended effect; the luncheon was sold out, and before I knew it, folks were streaming in the front door.

The meal was simple, and utterly spectacular! A dish of mussels in a broth that included tomato, white wine, garlic, fennel and a whisper of saffron, (a dish that every restaurant does, but one that has seldom moved me so) was paired with our 2000 Los Robles Viejos White. The mussels were perfect, and the flavor of the broth was soulful and transporting. There was a glorious, tender lamb pot-au-feu, served with our 2001 Rocks and Gravel. A lovely salad of field greens preceded a cheese selection to accompany our 2002 Bone-Jolly Gamay Noir.

A test that separates the great and not-so-great restaurants is the execution of a simple menu—dishes that have been done by nearly every European-inspired restaurant that’s ever come and gone. If the soul behind the ladle and the skillet can put something on your plate that moves you, that you still remember days, months, years later, they pass. I’ve only eaten at The Holly Hill Inn once, now, but I know in my bones there’s some really important stuff going on there, and I’ll go back every chance I get.

At the tasting at Bacchus, most of the people who came had been at the luncheon, and they were already in a pretty good mood (hell, let’s face it—they were floating on Cloud Nine), so we were like old friends, and it was probably the most comfortable I’ve ever been at one of these events. And, as bottles of wine got sold, people started asking me to sign them!

Like anybody else, I guess, when I was a kid I had fantasies about being famous enough (for something) that people would clamor for my autograph. But when I got Willie Mays’ autograph on a softball, when I was 12, (he was a god to me at the time, so after that there was no one else whose signature I cared about) the difference between how important I felt he was and how insignificant I felt I was seemed irreconcilable. Now, here I was, signing wine bottles for really nice people who seemed perfectly eager to have me do so. Didn’t they know I’d never hit a single home-run, not even in the minor leagues? Never stole a base, never saved a game with a leaping catch, or a throw to the plate from deep center?

The Bacchus tasting also involved the arrival of a guitar that had been borrowed for me to use, after my distributor had heard from some customers that they hoped I might be up for a little picking and singing while I was in the neighborhood. When one taster told me he wished he could hear me sing “If Wishes Were Horses,” I dutifully opened the case and discovered a Gibson B-25 that seemed not to have been played for quite awhile, judging by how little resonance the strings seemed to generate. I had a very tough time trying to get the instrument tuned sufficiently to feel any confidence about singing. Finally I managed to make it work well enough to get through the song. Yet, the moment of glory for this guitar would come soon enough…

That evening I had the privilege to dine at the home of a Lexington couple, Hugh and Gale Bennett . Hugh is an architect, of some high repute, I’d guess, at least if his house is any indication. Gale is in charge of some fundraising events for the University radio station in Lexington. I was treated to some Kentucky cooking: fried green tomatoes, fried okra, corn pudding, along with an enormous slab of prime rib, cooked beautifully. There was lots of good conversation, a roaring fire (on a frosty evening), and a bit more music. We’d brought the Gibson along, but when I’d met Mr. Bennett the night before, he’d mentioned his own guitar, and some connection said guitar had to a famous singer and picker from eastern Kentucky’s coal-mining area, who just happened to be one Merle Travis.

When Hugh was finally persuaded to bring out the guitar, I discovered, as I lifted it from its case, that its G-string was missing. But, oh it was a beautiful instrument! Even though it, too, had not been played for far too long, there could be no doubt in this heart of mine that here was something truly lovely that begged to have its voice heard. I didn’t really hesitate; I swiftly liberated the G-string from the Gibson and gave it its new home on this glorious Martin 000-28 (I’m guessing the model # here; I didn’t look inside, but from the size and shape, and the decorative touches, I’m sure it’s close, if not spot on.). It tuned up quickly, and I sang out one of two Merle Travis songs I’m sure I know, “Dark As a Dungeon.” Hugh told me, when the song was done, that he didn’t think there were more than a handful of people in all Lexington who knew all the words I’d just sung. I sure enjoyed singing it; I’ve probably sung it seventy or eighty times in my life, but I think they might all have just been practice for that evening. I feel like I learned that song, back in 1969, in order to be able to sing it that cold, snowy night in that cozy house in Lexington, with that old guitar in my hands. Hugh had bought the guitar from his college roommate, years ago, for all of $50.00, and I don’t know much more about its history than that, except that it’s apparently a model that had been designed just for Merle Travis.

I haven’t always enjoyed venturing out into the great, frozen East in the middle of winter, to sell wine. Maybe it’s just that Southern hospitality; I sure felt welcome everywhere I visited! I had a great time, yes I did.

So play me a song on the guitar; play it on the mandolin…
I’m lookin out on a brand new day, and wonderin where I been.
I keep thinkin there’s some plane I’m supposed to catch, but I know it must be too late, now…
Aw, but when I hear that First Bird sing, nothin else matters all that much, anyhow.

Steve Edmunds is the proprietor of Edmunds St. John winery in Berkeley, CA and is a regular contributor to Vinography. This piece originally appeared in his monthly newsletter, the Organolepticians, in 2004.