I love visiting new wine regions in person. There’s nothing like wandering through the back roads of a wine region to stumble across the wine equivalent of diamonds in the rough. Today, as we careened through the potholed streets of Lujan de Cuyo, one of the sub regions of the Mendoza Province, we chanced upon a small bodega (winery) named Adrover. After poking our heads in the gate and seeing indications of willingness to chat with us and show us around, we spent the next hour tasting some of the better wines we have had an opportunity to taste here in Argentina, and definitely the most unique.

Bodegas Familiar Adrover (“the Adrover family winery”) was started six years ago by Don Sebastián Adrover, his daughter Maria Marta Adrover, and her husband Adrian. Adrian and Marta’s families have been winegrowers for nearly three decades, and since he was young Adrian had the dream of owning his own winery. Maria Marta had the same dream, and after attending school to get her degree in enology, the two of them purchased an abandoned winery south of Mendoza and spent the next year refurbishing it and readying it for operation.

Adrover is my favorite kind of winery. Adrian manages the operations and winegrowing, Maria Marta makes the 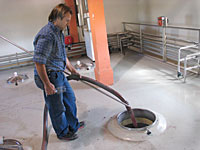 wine. They produce a couple thousand cases of wine each year and every single bottle is made from hand-selected grapes grown on their family vineyards which occupy about 120 acres at 4200 feet above sea level in the Lujan de Cuyo department of Mendoza. The wines are fermented with native yeasts, with no filtration or fining of any sort, and with extremely selective use of new oak. The winery produces Cabernet, Merlot, Chardonnay, Sauvignon Blanc, Malbec, Barbera, and a blend of Cabernet and Merlot that is their flagship wine. They also produce wine which they will sell in a damajon, a five liter bottle that looks like a big Chianti, which is how many of the neighborhood residents buy it. I think this is very cool, and really wish I had a neighborhood winery that would do that for me.

When we arrived, Adrian was in the process of pumping over a

tank of Barbera (a process where wine is taken from the bottom of the filtration tank and pumped up over the wine and floating berries on the top of the tank to aid in oxygenation), and as we were chatting, he grabbed a glass and let us all taste the bright purple, half-fermented wine. The wine had lovely fruit, but as I’m not used to tasting unfinished wine, I had a hard time imaging what the final wine would be. Just as sculptors can see the shape of their work inside a block stone, presumably winemakers can taste the must and fermenting juice and get a sense of the finished wine.

Maria Marta was busy with some other visitors, so Adrian was the only one who brought us down into the cellars, which occupy some of the old, huge cement fermentation tanks from the winery’s previous life as a high-volume producer. Here we tasted through their current releases and chatted with the affable Adrian about making wine, being a small winery, and the younger generation of winemakers in Argentina.

Adrover’s wines all have distinct personalities. While there were some that I like better than others, I found all of them to possess a soul and to express something — call it terroir, call it whatever you want — that is lacking in 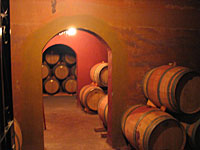 several of the wines I have tried from large Argentinean producers. What’s more, Adrover’s wines are unbelievable bargains, and not just because of the 3-to-1 exchange rate. Most wine drinkers in Argentina (and there are plenty of people who aren’t) have a similar sensibility to the French when it comes to wine — it’s so much a part of the meal that it’s nothing special, and shouldn’t be that expensive. Many winemakers feel the same, and price accordingly. Incidentally, this phenomenon is why some of the upper echelon of wine producers in Argentina have a tough time selling their wines in their own country.

To put a finer point on the idea of value, let me say this: the Chardonnay whose tasting notes appear below is the best Chardonnay I’ve had from Argentina. It costs $3 US. I’m bringing a bottle back home to slip in as a ringer for my next Chardonnay tasting and I’m sure it’s gonna blow away wines that cost more than ten times as much. If they made more than the 100 cases of it, it could totally change the American standard for what a $6 Chardonnay tastes like.

Adrover wines are not available in the US but that is not for their lack of trying. They are currently looking for a distributor. So you folks in the wine business: call them up and get these wines here. I’ll sign up as your first customer.

2001 Adrover Chardonnay, Lujan de Cuyo, Mendoza, Argentina
Light green gold in the glass, with a slight cloudiness, this wine has a very Burgundian nose which smells of buttered popcorn, cold cream, and lemon curd. In the mouth the wine is lush and full with a great mouthfeel and excellent acidity. In addition to the slightly parchment and brioche flavors which indicate extended contact with the lees (sediments from fermentation) the primary flavors are of lemon curd, cold cream, and crushed minerals. The wine has a lovely long finish and is striking in its Montrachet-like qualities. The wine is aged for 6 months on the lees in French oak barrels and for 4, yes, four years, in bottle before release. 100 cases made. Score: 9.5

2004 Adrover Cabernet Sauvignon, Lujan de Cuyo, Mendoza, Argentina
Medium ruby in color, this wine has a bright fruity nose of bing cherries and lunchbox raisins. In the mouth it has young, bright fruit flavors of cherries and plums and little structure or complexity. This is a wine aged entirely in steel with the intention for it to be a fresh, fruity and uncomplex wine for easy drinking. It has succeeded in that, but is not to my taste for its lack of complexity and depth. If someone made a Chianti out of Cabernet, this is what it would taste like. Score: 8/8.5

2003 Adrover Reserve Merlot, Lujan de Cuyo, Mendoza, Argentina
Dark ruby in color, this wine has a seductive nose of caramel, figs, and prune aromas. In the mouth it is full ad balanced with good acidity and an excellent mouthfeel. The primary flavors are dark: wet earth, plums, and soft tannins that together make for a very reserved, sophisticated package. Score: 8.5/9

2003 Adrover Reserve Cabernet, Lujan de Cuyo, Mendoza, Argentina
A medium ruby color in the glass, this wine has a mysterious nose of dates, raisins, and a somewhat bread-like aroma. In the mouth it has lovely balance and great structure with smooth, soft, integrated tannins that wrap around primary flavors of black cherries and leather and carry through to a nice finish. The wine is aged for 14 months French oak barrels before bottling. Score: 9.

2003 Adrover “Don Sebastián” Merlot/Cabernet, Lujan de Cuyo, Mendoza, Argentina
Deep ruby colored and nearly opaque in the glass, this wine has an ethereal, floral nose that brings in wisps of red fruit flavors and mixed wildflowers. In the mouth it is lush and silky with excellent body and flavors of dried cherries, dried cranberries, leather, and wet slate all of which mingle with resonance and good complexity through the moderate finish. The wine is 90% Merlot, 10% Cabernet Sauvignon. 420 cases made. Score: 9.5 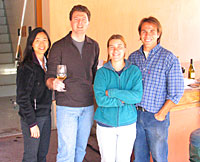 Again, these wines are not available in the US at this time. If you are interested in contacting Bodega Adrover, they can be reached at info@bodegaadrover.com or tel. 54-0261-488-2823.