The Deep End of Wine Analysis 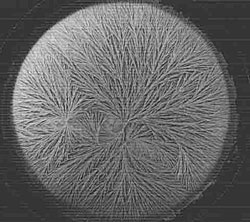 Randall Grahm, the founder and owner of Bonny Doon Vineyard, is definitely one of my wine heroes, if only because of his persistence in the face of ridicule and derision when he first attempted to make wines here in California. I also love his sense of humor, and his insistence on making every last one of his wines fun. He approaches the business with what I believe is the right spirit and lack of pretension, and is a champion of the average consumer.

Recently Grahm has also taken up the practice and the cause of biodynamic viticulture. I don’t hold this against him (or any winemaker) but at the recent Terroir conference held at UC Davis, he gave a long talk on terroir, biodynamic farming, and a new (to me) way of analyzing wine which he suggests may allow someone to identify a wine which is more “whole” or “dynamic.”

In his own words:

“I have always felt that language is highly inadequate to really describe the sensation of tasting a wine, certainly the language that merely breaks a wine down into its constituent components. Maybe a haiku, a spontaneous response, would make for more cogent wine criticism. But it turns out that there is a particular technique called “sensitive crystallization,” employed by practitioners of biodynamics, and it offers a different sort of language to talk about wine’s aesthetics; it speaks to a vine’s degree of connectedness to the soil, to its organizing and growth forces of the wine….It can tell you about the degree of organization of a wine and its life force, speaking directly to its overall harmony and ability to mature and improve. In a sense, it is the glimpsing of the wine’s aura, its subtle body, not necessarily obvious from the impression one gathers in the physical realm.”

Wheeee. Off the deep end we go.

This sort of thing demonstrates exactly why I have issues with certain aspects of biodynamic viticulture. The process that Grahm is speaking about involves taking wine (or any organic material), mixing it or dissolving it in copper chloride solution and then carefully and slowly evaporating the solution so that a crystalline residue forms.

Grahm goes on: “Sensitive crystallization is not a precise science, at all, not by a long shot. You do a number of replicates and they can all be a little bit different, but you do begin to see recurring patterns that are quite suggestive. ”

Here’s what the results of sensitive crystallization looks like:

So essentially what you do is take a look at this pattern (shown in black and white above for contrast) and…um…draw conclusions as to….the….uh….goodness of your wine and vines.

Or something like that. Its basically like reading tea leaves. This technique of wine analysis shares many qualities of the various preparations and techniques of biodynamic viticulture which pose so many problems for me.

Sensitive crystallization was developed in the early 1930’s by Dr. Ehrenfried Pfeiffer, a medical doctor interested in natural food cultivation methods, as a method of ascertaining the quality of various plant and vegetable juices and fruits. So far so good. Except for the fact that Pfeiffer’s experiments seem to have been conducted without the use of the Scientific Method, and the fact that he did not use scientific language to report his results, instead opting to describe how the patterns of crystals expressed the “vitality” of the various plants he was testing. Oh, and there’s the added fact that in the intervening seventy years, his techniques have never been scientifically or statistically validated.

I have no doubt for a minute any of the following:

1. This process yields pretty crystal patterns.
2. These patterns are different for different wines.
3. These different patterns are most likely the product of real chemical differences between wines.
4. That no one has any frikken idea of the direct correlation between various patterns and specific conditions in the real world or in the wines.

We only partially understand how crystalline structures like the ones shown above are formed from complex solutions containing multiple types of molecules. We certainly are unable to make the leap to demonstrate that certain patterns signify anything quantitative or qualitative about the plants whose fermented fruit juice went into the solution.

I’m sure it’s possible and even probable that Graham and many others have used this technique on different wines with remarkable results. Grahm claims that the crystalline patterns from biodynamic wines are distinctly different than those of conventional wines. It wouldn’t surprise me if that were the case — I’m certainly not questioning Graham’s truthfulness. But the leap from simple observation of difference to attributed causality is the core problem with the whole biodynamic movement. Sure you get different results in your vineyards when you go biodynamic, but no one has really bothered to pick apart what works, and why.

Instead the whole system is swallowed hook line and sinker. I’ll continue to drink biodynamic wines because some of them are good. I’ll even look at pretty pictures of wine crystals. But just don’t try to convince me that you know what they mean.