I came to Argentina in search of greatness. Specifically, I wanted to find the Malbec that would knock my socks off. I had tried dozens, even scores of Malbecs before my trip, including the highest rated wines from some of the glossy magazines, but I still had not tasted a wine that showed me the promise that so many people spoke of when they predicted a great future for Argentinean Malbec.

That has all changed now.

Last week we drove the back streets of Lujan de Cuyo, fifteen minutes south of Mendoza, and pulled to a stop on a short dusty lane in front of a big grey metal gate. No sign, no plaque, not even a street number distinguishes the 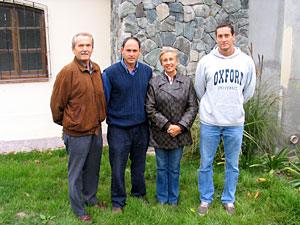 driveway of Viña Alicia. They don’t get many visitors, mostly because they prefer to keep somewhat of a low profile. A word from a friend, or simply a sincerely placed call, however, and the grey gate will open, as it did for us on an unseasonably cold morning in Mendoza.

We were met, quite unexpectedly, by the entire Arizu family for our tour of their modest facility. The vineyard is owned and run by Alicia Arizu and Rodrigo, one of her three sons. The other two sons, Gustavo and Alberto, work with their father Alberto Arizu at the family’s other, higher profile winery, Luigi Bosca. But on this day Alberto Sr. and Gustavo also joined us for our quick tour of their facility (as we shivered and stuttered our way through in a mix of Spanish and English), and then for a tasting in their cellars.

That we were joined by Alberto Sr. in addition to his wife was fitting, for it is their joint history together that is responsible for the birth of Viña Alicia as a winery. Alberto Arizu has owned and farmed some of Mendoza’s oldest vineyards for nearly three decades, using the grapes for some of the top wines in the Luigi Bosca line. But about 25 years ago, he and his wife began experimenting with what they call micro-vinification, making wines from not just single vineyards, but selecting special blocks within vineyards to make very high-quality, small production wines. These experiments grew into Viña Alicia, a winery focused on producing small amounts of extremely high quality wines from choice vineyard blocks.

The blocks that now make up Viña Alicia’s wines come from two of the family’s vineyards. The first is a twenty acre parcel that sits behind the winery itself, planted with Malbec, Nebbiolo, Cabernet Franc, Cabernet, Syrah, Grenache Noir, Carignane, Riesling, and Semillon, plus a few other stragglers. This vineyard has a mind-blowing vine density of nearly 4,500 vines per acre (11,000 plants per hectare) making it the most densely planted vineyard in the country. The other is a 30 acre vineyard of nearly 100 year old Malbec vines, which includes a painstakingly grafted 2.4 acre block of what the Arizu’s call “Brote Negro.”

Apparently, over the years of working this vineyard, Alberto Sr. noticed a strange variation in some of his Malbec vines. Some of them produced leaves that looked more like the leaves of a Cabernet vine, and their berries were smaller and darker than normal Malbec, and most tellingly, when the fruit got ripe, just near harvest, the stems turned dark, hence the name “Brote Negro” or “black stem.” As part of his experiments in micro-vinification, Arizu began making wine with berries just from these vines with intriguing results. Encouraged, he painstakingly spent over a decade selectively cloning this mutated version of Malbec until he had a small vineyard block of it, from which Alicia now makes one of her wines.

Viña Alicia operates much as you would expect a boutique, high-end winery to operate. The vineyards are farmed for very low yields (partially guaranteed by vine density) and harvest is done completely by hand in several passes through the vineyard, sometimes over weeks, to ensure only perfect ripe clusters of grapes are picked. The grapes are hand sorted and then most often hand destemmed using a special latticework table developed by the family for this purpose. The wines are fermented in small lots, specific to vineyard blocks, with natural yeasts whenever possible, and bottled without filtration and with only a light fining using egg whites. Some of the Malbec and the Cabernet are actually fermented in French oak, in addition to being aged in it.

Viña Alicia’s first commercial vintage was 1998 when they produced 290 cases. Their current production level is around 1700 cases across their various wines.

I got a chance to taste through the entire portfolio with the family, including a white wine, which they will release for the first time later this year.

2003 Viña Alicia Malbec, Lujan de Cuyo, Mendoza
Deep purple in color, this wine has a gorgeously floral nose that mixes cassis aromas with sweet flowers and vanilla scents. In the mouth it has a voluptuous fullness, rippling with juicy cassis and black cherry fruit flavors of great depth, but also incorporating very delicate tones of floral and mineral notes supported by a good acidity that lasts through a very long finish. This is both a juicy wine and a wine of depth and power that is balanced and complete in a way that many Malbecs are not. Finally and truly, a fantastic example of what the varietal can do. Score: 9.5/10 Cost: $62.

2002 Viña Alicia “Morena” Cabernet Sauvignon, Lujan de Cuyo, Mendoza
Medium ruby in the glass, this wine has a nose of red cherry, cola, and vanilla. In the mouth it is round and full, with excellent, full bodied richness and primary flavors of cherry, vanilla, cola, and slight hints of the green bell pepper that Cabernet is known for. These vegetal touches, to which I am very sensitive, stay just subtle enough to avoid overbalancing the harmony of the wine. The finish is substantial and satisfying, and the wine leaves the impression of being a forthright and statuesque example of Argentinean Cabernet. Score: 9/9.5 Cost: $62.

2004 Viña Alicia “Brote Negro” Malbec, Lujan de Cuyo, Mendoza
A bright, medium to dark purple in the glass, this wine has an unusually floral nose of violets, vanilla, and pencil lead or graphite. In the mouth the wine is bouncy and juicy on the palate with flavors of cassis and even raspberry as it bounds like an energetic puppy through the finish. Despite its youth the wine has a poise and a balance that make it a pleasure to drink and an interesting prospect for some bottle age. Score: 9.5 Cost: $72.

2003 Viña Alicia Nebbiolo, Lujan de Cuyo, Mendoza
Deep ruby in color, this wine smells of grapes and violets and black cherries. In the mouth it is slightly spicy as the grippy tannins coat the mouth and the full body of the wine makes its presence known. The primary flavors are of black cherries and currants and violets again, trumped only by the spices which return on the finish. One of the only (THE only?) Nebbiolos grown in Mendoza shows incredible potential. Score: 9/9.5 Cost: $72.

2003 Viña Alicia “Cuarzo” Petite Verdot Blend, Lujan de Cuyo, Mendoza
Dark, dark ruby colored in the glass, this wine has a thick nose of blackberry and blueberry jam aromas and a hint of dried flowers. In the mouth it is thick and rich, with dusty tannins kept well in check to allow the blueberry jam and chocolate flavors to smooth their way across the tongue. Nutmeg elements emerge in the rich and satisfying finish. The wine is a blend of 95% Petite Verdot, 2.5% Grenache, and 2.5% Carignane. Score: 9.5 Cost: $150.

2005 Viña Alicia [yet to be named] White Blend, Lujan de Cuyo, Mendoza
This wine is a cloudy light gold color with a green cast to it in the glass. And when I say cloudy I do mean, delightfully cloudy. It smells of sultanas, pears, and starfruit, with other light floral aromas that are hard to place. In the mouth it is surprisingly mineral in quality given the fruit of the nose, with flavors of flint, unripe pears, peaches and minerals. A blend of Riesling, Albariño and the somewhat obscure Savagnin, the wine has a bit less acid than I would like, but is far from flabby, and has a charming character that merits attention along with the basic pleasures of its fruit. Score: 8.5/9 Cost: $?? Not yet released.

These wines are in the process of being imported to the United States. I will have more information on where they can be purchased in the coming weeks.