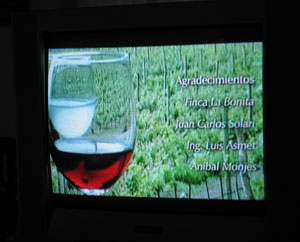 So I’m sitting in our rented apartment in Buenos Aires, waiting for Ruth to come back from an afternoon’s shopping, so we can go out and consume massive quantities of beef and red wine for the fourth glorious night in a row. Don’t feel like reading, so I turn on the TV and what should I find but a show called Vinos de Altura, which as far as I can tell is primarily wine and tangentially about food. How cool is that? OK. So we’ve got those kind of shows too, but it gets better.

Now they’re interviewing the winemaker of Finca Bonita, Luis Asmet, about the details of the harvest. They’re also interviewing a frikking lab technician, Anibal Monjes, about the chemical analysis of the wine and then about the olives that the winery also grows for making olive oil.

I’m far from fluent in Spanish, but I speak enough to know that this is not some wine country lifestyle show that has a ready-for-her-close-up cute hostess who just loves wine tasting and the wind in her hair, this is a show about the DETAILS of winemaking. These people are talking about PH levels and finer points of the sorting table and destemming. They’re discussing the relationship between the weather during the growing season and the flavors of the wine. This is the real deal.

Why is it that America doesn’t have a show like this? How is it that we must settle for stuff that rarely rises above the level of barely digestible fluff? And yes I’ve seen at least one episode of every spot they’ve got on the Fine Living Network and the Food Network.

This darn thing is even sponsored by the tourism board of Cafayete, Argentina where the winery is. How clever.

C’mon Napa, Sonoma, Columbia River Valley, Long Island, Santa Barbara, Oregon, why don’t you pony up a little cash and get us a show on any network that will take us? As if Riedel wouldn’t fall all over itself to be the official tasting glass of the damn thing.

I’ll tell you what’s wrong with America. There’s a chasm between the people who read the glossy wine magazines and the people out there who are sheepishly but passionately ordering a bottle of White Zinfandel with their pizza in Des Moines. People would love to learn more about wine if they could only have a chance to do it without the intimidation and occasional pretension of the major wine rags and without the soft-focus Martha Stewart version of the wine country.

Print this page and mail it to every TV executive you know with the following note:

“I don’t know this crackpot, but he might be onto something…”