So what is a perfect wine, anyway? There are several answers to that question, one of my favorites being, “There are no perfect wines, only perfect bottles.” Most folks who buy and drink their favorite wines with regularity know that some bottles just are better than others.

Another answer to the question might be, “There are no perfect wines, just perfect tasting moments,” where the wine drinker gets some celestial alignment between all things important to wine tasting — the flavors of the wine, the environment of tasting, the company, and the food on the table.

Finally, of course, I must admit that there are some wines that are just incredible. Perfect is a tricky word, because I believe there are infinite types and varieties of perfection, but some wines just lift you off your feet and keep you soaring for the entire time the bottle is open.

This bottle, like so many wines deemed perfect by me and by others who ramble on about wine, can be described all of these ways and more.

It helps, of course, if the wine has a story, and this wine has got one of the greatest wine stories of all time…

Once upon a time, there was a prince. His name was Alberico Boncompagni Ludovisi, and by all accounts, he was, well, a bit eccentric. And that’s putting it politely. Like all good princes, he had an estate, and like all good Italian princes (or so I fantasize) his estate had grapevines on it. Most princes would never pay much attention to the foliage on their grounds. They’re usually more interested in the various fringe benefits of being princely (of which we all know there are many). Our prince Ludovisi didn’t much care for fast cars, or for people, or conversation, for that matter.

He did care for wine.

Or rather, he was somewhat obsessed with wine and winemaking. So in the 1970s, he started making it, apparently without any formal training, and without much of any help from anyone else. Despite no real background in the subject, he had very particular views on the winemaking process, and the sort of wine he wanted to make.

The prince’s estate lies a ways outside of Rome, and was originally planted with local, nondescript varieties of grapes. He ripped these vineyards out and planted Cabernet Sauvignon, Merlot, Malvasia, and Semillon. He practiced complete organic farming, eschewing all pesticides before there was an official label for what he was doing, and kept the yields on his vines incredibly low. His wines were made in large, old oak casks which he 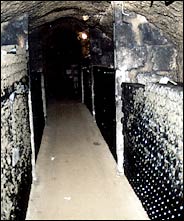 reused vintage after vintage to age the wines, numbering them and the wines they produced carefully. Apart from these numbers, and the name of his estate, Fiorano, he gave no other name to the wines.

Now we all know that every really good story has got some magic in it, and in this story, the magic comes from the prince’s cellar. Specifically, the prince’s wine cellar was covered with a downy white mold, which he believed to not only be harmless, but actually play an important part of his winemaking process, as it coated nearly everything in the cellar, from the barrels to the bottles which he laid down to rest there for years. The prince insisted that his wines required age, that they would in fact age for decades, and to make sure that would happen, he decided pretty much they weren’t ever going to be for sale.

Occasionally, over the years, though, a few bottles would get out onto the market, but only through the persistence of a few buyers who were constantly exasperated at the prince’s tendency to refuse orders, or when he accepted them, to send whatever he wanted, regardless of what was ordered. Eventually, he stopped selling his wines altogether, and in 1995, he stopped making them as well, ripping out all but a few of his vines, and closing the doors to his cellar.

And there the wines sat — 14,000 bottles, slowly covered with the friendly, magic white mold, slowly being forgotten, except for by a few who knew of the treasure that slept beneath the prince’s estate. One of those people was one of Italy’s most prominent wine journalists, Luigi Veronelli, who passed away about two years ago. In 2000, Veronelli pursued a careful quest to get the prince to give him a sample of a few wines, and when a merchant friend of Veronelli’s showed up to pick up the wine, he was told he could not have just one bottle, he could have them all, provided that he promise to sell them “properly.”

And so the wines surfaced again, and were shown to a select group of journalists, which is really the only reason I knew about these wines. Eric Asimov told their story in the New York Times, and some of the wine eventually reached the United States. A few bottles were purchased by a friend of mine, and he has graciously shared their contents.

This is one of the Prince’s coveted dry Semillon wines, made in unknown (but certainly small) quantities. Because of the Prince’s eccentricities and reclusiveness, we don’t know very much about how the wine was made, or even how the grapes were grown. At 11% alcohol, and fermented dry, the grapes clearly did not reach full ripeness before harvesting. That’s about all I’m capable of inferring from the wine, which (wonderfully) betrays little of the mystery of its making. Not that this knowledge would really make that much of a difference in light of such a compelling story behind the wine. This is one of those wines that transcends wine, and becomes something else entirely.

May we all be lucky enough to sample wines like these in our lifetimes.

Tasting Notes:
This wine appears slightly cloudy with a light brown or beige tint in the glass. Its wonderfully complex and mysterious nose is redolent of dried herbs, mixed wildflowers, light touches of honey, and layers of sweet butterscotch. In the mouth the wine has incredible length, clarity, depth, and complexity. Somewhat silky on the tongue with hints of brightness from acids that are still structuring the wine even after 25 years, the wine tastes of sarsaparilla, butterscotch, pine sap, and several other light, airy flavors that are impossible to pin down. The finish tapers off gradually and effortlessly, lasting for seemingly minutes. I think the first words out of my mouth after tasting this wine for the first time were “holy shit.”

Food Pairing:
We drank this wine at a long dinner with many courses, but I thought it paired best with a parmesan risotto and arctic surf clams with sous vide salt cod with a saffron sauce. The dish was topped with crunchy fried onions.

The only place to purchase this wine is through Sergio Esposito at the Italian Wine Merchant in New York, and bottles must be purchased in mixed cases. Contact Sergio at sergio@italianwinemerchant.com.