Vinography’s participation in this event started, of course, with the selection of the wine. Rather than pick a favorite bottle (yes, already I’m breaking the rules) I asked my wife, Ruth, what she wanted to drink tonight. Imagine my surprise when she said, “Merlot.” But when the wife wants something, I try to deliver. After rooting around in the cellar for a while, I came up with a likely candidate, something that had been sitting in the corner for some time. Then came the problem of finding something to cook for it. It’s been a pretty busy week with my business partner out on paternity leave, so I didn’t have much time to marinate anything for 24 hours, or to braise something for four hours in the oven, so we ended up with a simple pairing that was quick to make, but a perfect match for the wine.

But I am getting ahead of myself.

Merlot sales have plummeted in the wake of Sideways. If we ever needed proof of the power of Hollywood, the fact that Pinot Noir has replaced Merlot as the drink of choice for most art gallery goers and casual dinner drinkers would be enough. Pinot noir sales up 36%, Merlot sales down 25%. All from a single (but, yes, brilliant) line in a decent (but not phenomenal) film. Ironically, the wine held up as a holy grail in the film, the 1961 Cheval Blanc, is about 50% Merlot. There are certainly reasons for Miles’ aversion to the varietal. Many mediocre wines are labeled Merlot every year, but this mellow grape with its plummy character can make an exceptional wine in the right hands.

This particular bottle is certainly proof of that.

Barbara and Jim Richards started to visit the Napa Valley in the early 1970s and gradually fell in love with the landscape, the lifestyle and the wines. Avid gardeners and foodies in their community in Texas, they eventually were in the position to think about buying a second home, and the fantasy of a small cottage in the hills with a vineyard out back began to take shape in their minds. In 1983 they got a call from a friend who lived in Napa which would change the course of their lives. This friend, Dan Duckhorn (yes, that Duckhorn) told them of a property that had just become available at the top of Spring Mountain, five miles up a windy road from the village of St. Helena. This small, 20 acre parcel was the beginning of the Richards’ adventures in wine, and is now the home of Paloma Vineyard.

The Paloma (which means “dove” in Spanish) property lies, at its lowest point, 2060 feet above sea level, and at its highest, 2240 feet. This steep hillside property, eminently characteristic of the Spring Mountain District was planted as early as the 1850’s with grapes, but at some point was abandoned and the Douglas fir forest creeped in. The Richards’ have pushed it back to the point that now 15 acres are under cultivation with vines, but they still occasionally find old redwood vine stakes as they expand their acreage towards the borders of their property.

The Merlot vines on the property were planted in 1985 as part of the first installation of vineyards, and after several years of first commuting from Texas, and then commuting from the bottom of the hill in St. Helena, the Richards’ built a house next to their vineyard where they still live today. More enterprising or profit focused winery owners would never have thought of planting Merlot, opting for the higher priced and surer bet of Cabernet on Spring Mountain, but the Richards’ didn’t get in the business for anything other than the love of what they do. Barbara insists on driving the tractor around the property herself most of the time, after Jim made the purchase of the machine conditional upon the dealer teaching his wife to operate it.

The earliest vintages of grapes were sold to their neighbor, Bob Foley at Pride Mountain Vineyards, a move which would prove fortuitous, not only because of the role their grapes would play in some of Pride’s most acclaimed wines, but also because of the strong friendship they would forge with Foley, who would make the Paloma wine for a few years and still offers insights and guidance.

These days, Paloma even has a winery facility, so they don’t have to truck their grapes somewhere else to make their wine. The grapes are hand harvested and fully destemmed before being placed in a modified crusher, which very lightly crushes the berries before fermentation. The wine is fermented in small open-top fermenters and/or steel tanks before being lightly pressed. After the sediments settle out, the wine is gently transferred to a combination of new and used French oak barrels where it is aged for around 20 months before bottling.

The Paloma Merlot usually has somewhere between 12 and 18 percent Cabernet Sauvignon in it, which is also grown on the estate. Winemaking is now done by the Richards’ themselves, I believe, who have proven dedicated students under the tutelage of Bob Foley.

The 2001 vintage of this wine was named the Wine of The Year by The Wine Spectator, having the priviledge of being the first California Merlot to receive that honor.

Tasting Notes:
A deep ruby color in the glass, this wine has a rich nose of plum, black cherry, spices, violets and blueberries, which, over time, mellow into slightly earthier tones of tobacco and blackberry. In the mouth the wine is poised and excellently balanced, with good acids and a lush mouthfeel on which float flavors of black plums, blackberries, and tobacco. The wine has a very light, nearly imperceptible tannic structure, that fades in the very long finish to notes of black pepper and cedar. This is certainly a big wine, at 14.8% alcohol, but it never for a moment loses its grace on the palate. Definitely one of the better Merlots produced in Napa, and one which, in my opinion, is best drunk in the first 5 to 8 years after release.

Food Pairing:
With this wine we at a dinner of grilled rib-eye with chimichurri sauce and rosemary potatoes fried in duck fat. We were looking for something quick that would be a sure thing to pear with this deep rich Merlot. The tanginess of the chimichurri sauce contrasted nicely with the deep rich fruit tones of the Merlot, bringing out some of its earthier notes, and the buttery steak soaked up the light tannins making for a whole that was truly greater than the sum of its parts.

The recipe for today wasn’t rocket science, so I won’t insult anyone by describing how to grill a steak or fry potatoes in duck fat, but if you’re interested in the chimichurri sauce here’s how to do it: 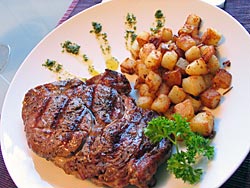 Alder’s Chimichurri Sauce (a variation on a recipe originally in Gourmet magazine):

Put all ingredients into the food processor and puree until smooth. Spoon over hot steak and soak up the extra with bread.

This wine can readily be found to purchase on the Internet.